Sukuk: How to Invest in Islamic Bonds

Investors looking for fixed returns they can count on have had a hard go of it lately. With interest rates in the U.S. and Europe at multi-year lows, fixed income instruments such as government and corporate bonds are yielding abysmal returns. 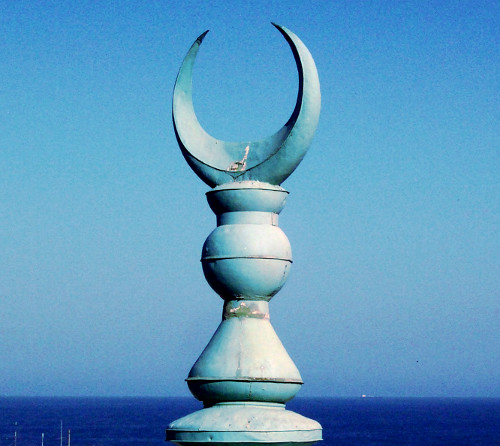 With the U.S. 10-Year Treasury yielding under 3% for last three years, many investors had increased their risk tolerance to get a few extra percentage points by venturing into European bonds in such countries as Italy, Spain, Portugal and Ireland. But with the European recovery still stagnating, the adoption of American-styled stimulus through bond purchases has raised European bonds and lowered their yields to levels comparable to U.S. Treasuries – with 10-Year bonds yielding 2.44% in Italy and 2.31% in Spain, while the heavy-weight German bond pays an appalling 1.02%.

Where in the world can investors get a decent fixed income now? The Middle East, where the region’s innovative bonds known as sukuk are paying annual fixed returns of 3 to 8% and more on U.S. dollar denominated bonds.

We took a look at the unique characteristics of sukuk bonds in last week's article “Islamic Bonds (Sukuk), An Alternative Investment Vehicle With Worldwide Appeal”. Here we’ll follow up with some ways in which we can participate in this higher yielding asset class which is growing in popularity not just in the Middle East but the world over.

First, let’s recap what sukuk are.

Because Islam prohibits usury – collecting interest from your loans – interest-based bonds are banned in Muslim nations. Instead, governments and corporations looking to raise capital will issue sukuk notes which still pay a fixed percentage return, but with two major differences:

For instance, when a shopping mall issues sukuk, ownership of its assets is transferred to the sukuk holders. As co-owners of the mall, sukuk holders are entitled to a share of the mall’s profits, which is paid at a fixed percentage based on international benchmark bond rates of comparable category.

In both cases – sukuk of revenue-producing businesses as well as sukuk of non-revenue producing government projects – it is not debt but tangible assets that are transferred to the sukuk holder. Those assets are then transferred back to the issuer when the sukuk matures, with the principle investment paid back to the investor.

Thus, because the investor is not buying debt but is buying a tangible asset that generates either revenue or rent, returns paid on a sukuk are acceptable under Islamic law since they are considered profit-sharing benefits, not interest.

An additional characteristic of sukuk is their strict avoidance of Islamic prohibitions on gambling, alcohol, tobacco, narcotics, and adult entertainment products and services. An investor in sukuk can rest assured they have not invested in any activity prohibited by Islam’s holy book, the Quran.

Though sukuk are readily identified as Middle Eastern investments, the largest market for sukuk is actually in Malaysia, which has more than 50% of all outstanding sukuk issues. As such, sukuk are more accurately classified as Islamic bonds, rather than Middle Eastern bonds.

Whether you are a Muslim looking for Islam-sanctioned fixed income investments, or a non-Muslim looking for a higher yielding bond which is based on solid assets rather than on intangible debt, your search for sukuk would likely begin in the investment markets of Malaysia, the United Arab Emirates, and Saudi Arabia – ranked the top three sukuk markets in the world. Other major sukuk markets are noted by relative size in the image below based on July 2014 data. 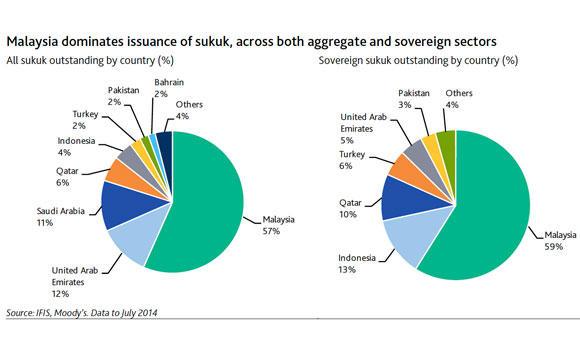 Yet sukuk are increasingly being offered in non-Islamic nations as well, as Moody’s Investors Service this month revealed:

“The year 2014 has become a landmark year for sovereign sukuk, with the UK issuing its inaugural sukuk, and with Hong Kong and South Africa expecting to conclude sales in September,” informed Khalid Howladar, Moody’s global head for Islamic finance. “All three are major non-Islamic countries, and the transactions indicate a significant change in the potential size, depth and liquidity of this market.”

Just how large is the size of the global sukuk market? Some $296 billion as of July 2014, Moody’s estimates.

With the sukuk’s rapid rise in popularity over the past few years, a number of indices tracking baskets of sukuk have been established by such well-known index houses as S&P Dow Jones and Thomson Reuters.

The index is doing quite well in comparison to equity indices. Where the S&P 500 has gained 18% over the past year, the S&P MENA Sukuk Index has gained more than 8.2%, this in addition to its weighted average coupon of 3.6%. Of course, this is a bond fund, which comes out the clear winner when compared to other bond funds such as PIMCO’s Total Return ETF (NYSE: BOND) which grew only 5.15% over the past year with a yield of just 3.3%.

But if you want to get into some of the actual sukuk themselves, you’d have to go through foreign channels, one of which is the NASDAQ Dubai Exchange.

“NASDAQ Dubai is a leading venue for the listing of Sukuk and bonds,” the exchange defines itself. “Dubai being the third largest Sukuk venue globally, NASDAQ Dubai currently has a listing of a total nominal value of USD 18.3 billion.”

Here are just a handful of sukuk investments available on its exchange:

A larger list can be found at NASDAQ Dubai’s website, which includes equities, government bonds, and more sukuk.

In a world of still anaemic economic growth with multi-decade low interest rates for years to come, income dependent investors looking for yield may find sukuk to be a refreshing innovation. Not only are they issued by some of the fastest growing economies in the world, offering twice even thrice the annual income of western bonds and with almost equity-like appreciation, sukuk give investors a little peace of mind which was lost during the west’s credit meltdown a few years back.

Based on finite assets, sukuk cannot be stamped out like cookies the way corporate and government debt can. Where many western corporations and governments regularly issue more debt than the value of their assets – over 100% - Islamic governments and corporations will never issue sukuk in excess of the assets under their control, since all sukuk issuances must be backed by hard assets.

Who says you can’t find solid paying and safe fixed income investments anymore? And for investors who invest their money in accordance with the moral principles of their faith, sukuk can offer you that as well.

Scotland Independence Could Disrupt the Banking System
Scotland's independence could send shock waves through the banking system.
How to Protect Yourself from Negative Interest Rates
Here comes the next round of negative interest rates. Will the Fed follow?
Investing in Actively Managed Mutual Funds
With interest rates set to rise, the landscape is going to change, and mutual fund managers have to be ready.
Buffett's Envy: 50% Annual Returns, Guaranteed
Warren Buffett once told investors at an annual shareholder meeting, "...it's a huge structural advantage not to have a lot of money. I think I could make you 50% a year on $1 million. No, I know I could. I guarantee that."