Stocks to Trade the Harvest

This Corn Needs No Water

I went to a restaurant the other day, and the menu had a little white sticker on which was written: “Corn Chips and Salsa: Market Price.”

That's something you don't see every day.

As you know, corn has reached a record price per bushel this year based on the driest summer since the Dust Bowl.

The USDA said this week:

The proportion of the U.S. corn crop rated in 'good' or 'excellent' condition as of Sunday was 22%, unchanged from last week. The proportion in 'poor' or 'very poor' shape was unchanged at 52%.

For soybeans, the proportion of the U.S. crop rated in good-to-excellent condition was 30% as of Sunday, unchanged from last week.

Those are bad numbers.

They mean cattle ranchers are selling their herds early and at a loss, because they can't afford to feed them. They mean importers like India, Egypt, and China will have to pay high prices to feed their people. They mean breadbaskets like the Ukraine, Russia, and Argentina, which are going through droughts of their own, could halt exports to ensure they have enough food for themselves.

It was high food prices and hunger that set off the so-called Arab Spring.

Global coarse grains projections — which include corn — have been reduced by a massive 56.5 million tons.

No one doubts this is a very real problem — but as always is the case in the trading business, what is bad for one sector is good for another...

We Don't Need No Stinking Water

About 250 farmers on close to 100,000 acres across the western Great Plains planted DroughtGard in the spring. The anecdotal evidence is promising, but there are no specific numbers.

Last year, yields of AQUAmax corn were observed 8,000 times, with 680 of those considered to be in a stressed environment...

AQUAmax yields were 7% higher in the stressed environments compared to conventional hybrids. 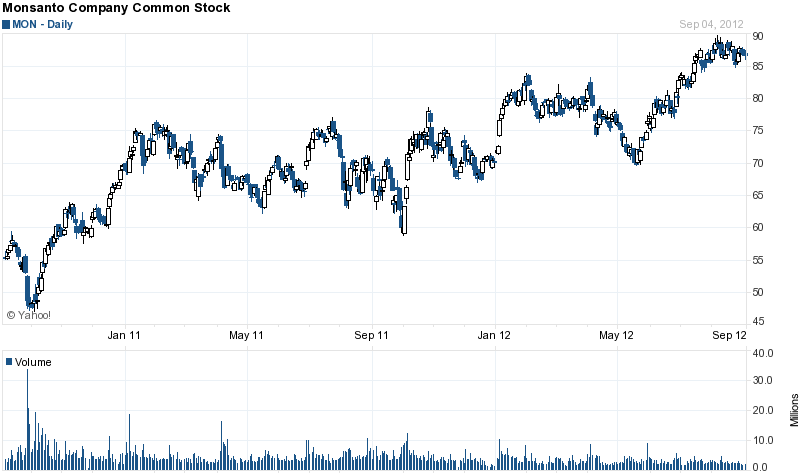 As you can see, the stock has more than doubled over the past two years — and continues to hit higher lows and higher highs, the very definition of a bull market. It seems a bit pricey to me, but DroughtGard sales next year could launch it.

You could make a case for buying Dupont for its dividend on the dips...

But quite frankly, there are much better dividend players out there. My associate Brian Hicks can tell you about one of the best.

If you want to play the drought, the best way to invest is with nitrogen fertilizer companies.

As farmers go into the next round of planting, they will be hard-pressed to increase yields to make up for this year's lack of production. This means a heavy dose of fertilizer.

And the company that's winning the fertilizer game seems to be CF Industry Holdings (NYSE: CF), the largest nitrogen producer in North America.

CF is the most undervalued of the lot with the most upside.