"Individuality, liberty and property: This is man."

I'm often asked by people to explain what it is I do, exactly.

Usually this is just small talk from new acquaintances and family friends, but it inherently just means "What's your job?"

As one may imagine, it can be incredibly difficult to explain.

It's not as simple as giving myself a professional label, like a lawyer or a doctor.

And inevitably, a question about how I make a living leads to a more substantial conversation about the contentions our world is facing — and our cogitative approach to dealing with the protection of one's wealth in that world.

Our reasoning is based on the idea of becoming a Renaissance man of the markets... 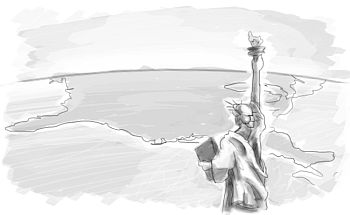 That in order to be a successful long-term investor, it takes much more than a few stock picks here and there.

It takes a deeper understanding not just of the markets — but of the nature of man, of how things work and, dare we say, a search for meaning in one's life.

And it starts with firm bedrock of simple universal truths.

Without them, one could easily fall victim to the insane ramblings of a man like Paul Krugman, who is taken seriously enough to command space in the bully pulpit of the cognoscenti the New York Times.

And while we like an easy target like Krugman, the truth is the majority view on most topics is what George Soros calls "a false premise" — meaning, it's almost universally wrong.

By taking the common road followed by the masses, most investors are doomed to failure.

Worse, these folks will live with a gnawing sense of dissonant beliefs that resonate through their morality and intellectuality, troubling their souls at an even deeper level.

This innate contradiction is the reason it's been said that most men lead lives of quiet desperation.

Perhaps it was with some of these deeper questions in mind that French economist and statesman Frederic Bastiat argued so eloquently in a vain effort to bring his countrymen to their senses in the 1840s...

Bastiat spoke of universal truths — ideals that, if ignored, lead down a dark path.

What are these truths?

What are the conditions that allow the human spirit to flourish?

You'll be familiar with them, even if they're rarely spoken of today: life, liberty, and the pursuit of happiness.

Or as Bastiat put it: Individuality, liberty and property: This is man.

Thomas Jefferson wrote in the Declaration of Independence: "We hold these truths to be self-evident, that all men are created equal, that they are endowed by their Creator with certain unalienable Rights, that among these are Life, Liberty and the pursuit of Happiness."

Let me explain what that means as it was explained to me in 1992 by my political philosophy professor, Dr. McGrath.

It means that even if you wanted to give away those "unalienable rights," you couldn't. No hot-air-filled politician can take them away; these rights are not bestowed upon us by a government.

Government can only respect or usurp these rights, end of story.

These rights belong to every human by virtue of birth.

A lack of self-respect and a failure to understand these truths are fatal.

And so can be the tendency of man to live at the expense of his neighbor... to get whatever he can with the barest minimum of effort, consequences be damned.

Patriotism for the sake of the state is the hobgoblin of simple minds.

These men believed in the idea of freedom, and that's what is lost in translation... Freedom is an ideal, not a place.

Our Founding Fathers understood classical Roman and Greek philosophy, the early teachings that depicted man himself as the holder of unassailable freedoms and rights that are inherent.

A blind, irrational, and dissonant allegiance is exactly the kind of belief, accepted without question, that will hollow out a man inside.

Yet with a firm grasp of these concepts, these ideals, one is equipped to see very quickly what is... and what should be.

Knowing the difference can save one from living that life of quiet desperation.