Silver has had a bad run of it.

It is trading at $21.69 as I write this. This is very close to the production costs of miners.

A contrarian investor believes you should zig when the market zags. After all, if the herd has sold, then everyone left must be buyers. And when the herd comes stampeding back, we'll be more than happy to sell it to them at a profit...

We are all good contrarians, are we not?

With that in mind, I present the bullish case for silver.

The dominant paradigm in precious metals has maintained that there has been a manipulative cap put on the price in the U.S. and Europe — that is, central banks want to push down the price to keep inflation low, while there is a premium placed on physical metals in Asia.

A few weeks ago, physical silver was trading as high as $30 per ounce in Shanghai due to lack of supply. Recent numbers out of China say gold imports will hit 880 tons this year.

Furthermore, it is expected that central bank gold buying will be between 450 and 550 tons this year.

The question is why would precious metals have a disconnect between increased demand and falling prices?

It's impossible to say. We outsiders may never know.

What I do know is that the market can be manipulated for awhile, but the truth in price discovery finds a way to become clear sooner or later. And when that happens, you will have a massive rerating of silver and gold ETFs. That's how speculators make the big bucks.

If you look at the charts, you can make a bullish call on the technicals.

I like silver because it has seen a bigger drop than gold, is more volatile, and has more upside in the short term.

Here's the chart of the Silver ETF SLV: 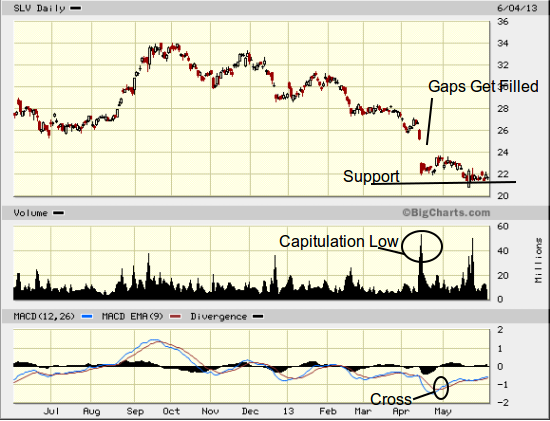 As you can see, there was a massive dumping of shares in April as hedge funds and other investors puked out all of their holdings. The corresponding volume spike is called a capitulation low.

Investopedia defines capitulation as “when investors give up any previous gains in stock price by selling equities in an effort to get out of the market and into less risky investments. True capitulation involves extremely high volume and sharp declines. It usually is indicated by panic selling.”

That's just what we saw in the SLV market in mid-April.

You will also see a crossover of the MACD line, which is a moving average indicator. A cross below the zero line is considered bullish and visa versa, though it usually takes some time for this to play out.

The second volume spike in mid-May is value investors coming in at the support line, which goes back to the 2008 high.

Lastly, I present a hoary old Wall Street trader saying, “The market abhors a vacuum, and gaps get filled.” This means the share price will come back up and fill that gap-down around $25.

Not all gaps get filled, but this is another data point in favor of the bulls.

You can make a solid technical case that silver will pop back up above $24 in the short term — though it has to break out of its downtrend for me to be a serious buyer, and not just an options trader...

There is a very real possibility of a violent move upward.

The silver price moves both as a safety play against a falling currency and as an industrial metal.

Right now, no one wants to own silver because of the global commodity slump and slow economy, coupled with a surging U.S. dollar. If either of these trends were to show a hint of reversal, silver could launch.

As of May 21, the speculators at the Comex division of the New York Mercantile Exchange turned net short for the first time since early April. Not only that, but net shorts are at a record level.

Several market watchers said with the increase in speculators’ gross short positions are at record highs, which underscores the disinterest traders have for gold (silver) and the problem prices have when they try to rise.

Given the sizable gross short positioning, if attitudes change, there is room for prices to rise a fair amount, spurred by the possibility of short covering, analysts said.

This is similar to the situation we saw in July 2012. That's the last time we had so many short positions in silver and so few longs. That was the low in silver for the year... and within two months, silver prices rose more than 30%.

When there are so many shorts and you get an upward move in price, the shorts must cover —  i.e., buy back the shares at a higher price.

Once short covering starts, all the traders must run for the door at the same time. This drives up the price, and puts more pain on the shorts. And as soon as the longs see the short buying back shares, they jump in and drive the price even higher, creating a rapid boom.

This is called a short squeeze. It happens all the time.

There is a good chance it will happen in silver and gold within the next three months.

So there you have it: Asia retail and global central banks putting a floor under prices... a short-term bullish technical chart... and a massive set up for a short squeeze.