Silver in the Digital Age

How the New Fix Will Play Out

A new era has begun in the silver market. The 117-year old silver price fixing mechanism was replaced on Monday by a new electronic pricing system, and many have hailed the change as the beginning of an era of transparency in precious metals pricing.

Others, though, wonder if anything will change at all. For years suspicions of price manipulation by the fix’s member banks have beefn fuelled by the secrecy of the fixing process - where member banks haggle on a price via telephone conference until reaching an agreement amongst themselves, the resulting “fixed” price then being imposed on the entire global marketplace for all to trade by.

In an effort to dispel such suspicions, the Chicago Mercantile Exchange – the home of the new electronic silver fixing auction – is providing six months of free data access to interested lookie-loos. The public now gets to see numbers flashing on a board until the member banks come to an agreement.

But does that really remove the possibility of collusion among member banks to fix the silver price according to their own best interests? Not really, some suggest, because collusion could still be taking place amongst the member banks before the auction even begins.

As we look at the price fixing process and how it is conducted, we’ll notice plenty of opportunity for collusion to take place. We will then follow that exposé with some interesting numbers on a very large short interest in silver contracts which could move the silver price very abruptly.

That is, of course, unless the price fixing banks have already secretly determined otherwise.

Thus, the Chair determines the prevailing middle price of the metal and puts it on the table.

Once the Chair has called out the opening price, the banks participating in the fix add together all the buy and sell orders that can be filled at that price – counting all client orders as well as their own bank’s orders. Each bank will thus have either a net buy or net sell at that price.

• Step 3 – If balanced, the price is fixed: “If there is no buying or selling interest, the Chair will announce the trading price as fixed at the opening price.”

If none of the banks has any buy orders or sell orders that can be filled at the opening price, the net amount of gold or silver to be traded would be zero. This means a happy median has been reached, with the opening price landing right in the middle between the buys and the sells. The Chair then declares this perfectly balanced price as the fix for that time period.

The price is thus continually moved up or down until there is an equal balance of metal to be bought and sold.

That middle price then becomes the new fixed price.

The process, therefore, is nothing more than an auction, where buyers and sellers meet to haggle-out a price.

The price where supply meets demand is then published the world over, enabling producers to sell and manufacturers to buy at a fair market price.

To that end, the price fixing mechanism is a valuable service, necessary even, to ensure everyone from mining companies to jewellers to technology companies are getting a fair price. And there is absolutely nothing wrong with nor sinister about it.

However, even with the new electronic display at the CME flashing the auction’s numbers, and even with supervision by data publishers Thompson Reuters… who is to say that the banks participating in the fixing auction are not withholding some of their orders to intentionally drive the price higher or lower?

Remember how the fixing process works. The Chair will keep moving the price up or down until there is a perfect balance between the amounts to be bought and sold. If the group wanted to push the price higher, all they have to do is withhold their sell orders. Too many buyers with not enough sellers means the Chair has to move the price up.

Conversely, if they wanted to drive the price lower, they would simply withhold their buy orders, and the Chair would have to move the price lower. And the participating banks could easily coordinate these moves ahead of time before the auction even begins.

Not to say this is actually happening as so. But publishing numbers on a trading board does nothing to dispel the suspicions.

Love it or hate it, it’s something metals investors have to live with. The potential for manipulation exists in every market; but that doesn’t mean investors should avoid them. Advisors recommend a certain percentage of any portfolio be devoted to a mix of precious metals including gold, silver, platinum and palladium.

As noted in the graph above of the iShares Silver Trust ETF (NYSE: SLV), since silver’s collapse three years ago in the autumn of 2011, the metal established two prolonged levels of support (blue lines), each lasting more than a year.

In the case of gold swaps, “their net short position on 5th August was 84,108 contracts, about 30,000 higher than their long term average,” the report explains. “While this may have reduced a little since then, there is insufficient liquidity on Comex for them to close this collective net short without driving prices sharply higher.” “The result is Swaps are now net short to an uncomfortable degree.”

The absence of market participation leaves big gaps between buy orders going down and sell orders going up. Once the first few orders closest to the market are filled, the price can run very quickly up or down the ladder because of such large gaps to the next order in line.

“They have a similar problem in silver,” the report presents, “and the technical situation is potentially very strong, as can be seen in the Open Interest chart below.” 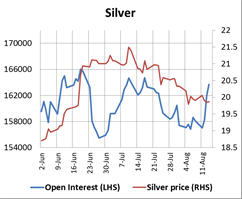 “Open interest [blue] is rallying strongly while the price [red] remains held under $20. This indicates someone or some parties are sitting on the price refusing to let it go higher. The next break above $20 could see the price go substantially better. With the new London fix from today, it looks like Canute’s attempt to stop an incoming tide of buyers,” the report draws its conclusion.

Indeed, rising open interest means a flurry of buying. This should have driven silver’s price up by now, but clearly did not. Hence the conclusion that perhaps the fixing banks are at it again, colluding to keep the price down.

If so, why? Might they be keeping the price down so they can accumulate more at a cheap price before finally releasing it upward? And if they do finally release the price to rise, wouldn’t all those short positions be forced to close them in a hurry, adding to silver’s upward momentum all the more?

It remains to be seen. For all we know, all those short positions could be held by the banks themselves. And if they collude to push the price below the current line of support, it could fall substantially lower, making them a great deal of profit.

At either rate, silver seems due for a large move. We just don’t know in which direction. This is precisely the type of situation that options were made for – specifically the “long strangle” position comprised of a long call and a long put of differing strike prices to earn a profit regardless of whether the market moves up or down.