To Taper or Not to Taper: Buy Gold and Silver

The summer is a funny time in the markets. Volume drops and manipulations increase.

Today's market is even more surreal than a Dali print. The volume on the S&P 500 has been falling since it peaked out over 10 billion shares a day in 2008. These days, it's lucky if it trades over three billion shares a day. This is despite the talk of high-frequency traders and the retail investor coming back.

After two massive bear markets in ten years, it could be that the retail investor isn't coming back. Not that it matters; the stock market keeps walking up its trend-line as bullish as ever.

Then again, $85 billion in Fed-funded debt creation a month will do that for you.

The only fear is if the Fed stops buying, or tapers its buying, in the next few months.

This sets up the idea that “bad news is good news.” The latest market data has all been bad.

As you know, housing starts are down, mortgage rates are up, employment is down, average work week is down, average income is down, all the retail shops from Wal-Mart to Macy's missed earnings, oil is at five-month highs due to our next war in the Middle East, and factory orders plunged 7.3% in July.

Those data points would in times past have caused a sell-off in equities.

But in this burning giraffe market, it means that the Fed can't taper its bond buying — which in turn means it will produce yet another crutch to prop up the market, which brings us to metals...

In case you hadn't noticed, commodities — including gold, silver, wheat, corn, copper et al. — have been surging over the past few weeks.

The mainstream market media may have been “surprised” by this “unexpected” turnout, but you were well informed...

Yesterday SLV was trading at $23.56, or just about halfway to my price target: 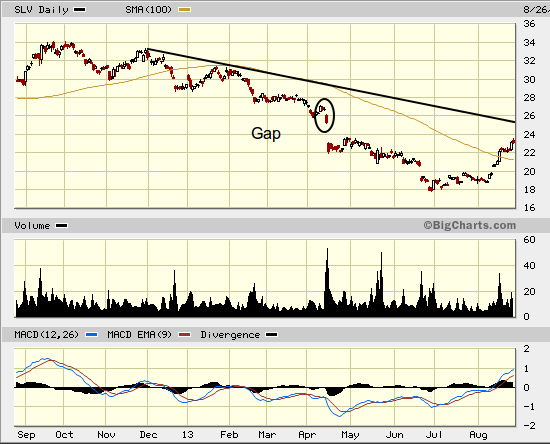 Silver is up, crossed over its 50-day moving average on increasing volume, and is pushing higher.

I expect it will hit the top of its downtrend line before pulling back to retest support.

The week before, I analyzed the gold chart and told you that a doji formation signaled a rebound on the gold ETF GLD... 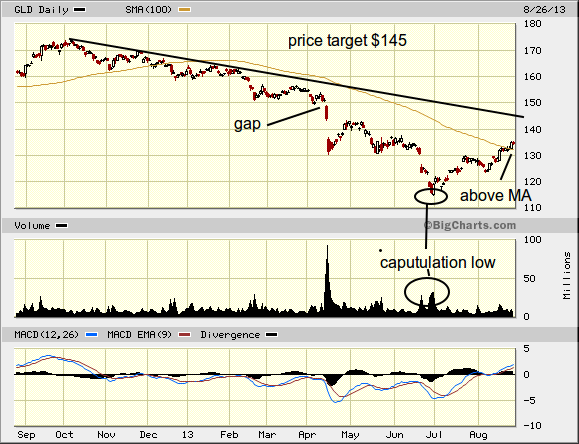 Since I wrote that article six weeks ago, gold has put on more than $200 and crossed over the 50-day moving average. It is a little less clear, but a move to $145 on the GLD ETF has better-than-average odds of happening.

Part of the reason for the bullish leg up in gold and silver is that large speculator positions have sold out over the past eight months.

Most notably, John Paulson sold more than half of his position in SPDR Gold Trust, which coincided with gold ETF outflows in the second quarter. These outflows reached $18.5 billion from March through June, which corresponds to the capitulation low we see on the charts.

Contrary to this, emerging markets have been hit with a spate of currency depreciations that caused them to lock in gold to maintain buying power. The fact that gold was down made it all the better.

Now you have a situation where the shorts are getting blown out in a classic short squeeze.

The market is constantly changing; but short term, I expect precious metals will be up — especially if the Bernank tapers.

If he doesn't taper, precious metals will be up in the long term.