We Are at a Tipping Point

My daughters were over at the neighbors' house playing with their friends this weekend.

It was hot, so I suggested we buy a Slip-N-Slide or an inflatable pool and let the kids cool off in the yard... You know, good ole libertarian, free-market fun. We were going to go Galt around the hose.

The problem was the neighbor said she hadn't had a working hose in over seven years.

I'm talking about a 5,000-square-foot-with-eight-acres-and-a-three-car-garage, best-schools-in-the-country commute-to-D.C.-type of house, and she couldn't get water flowing in the backyard.

Turns out the pipe in the garage split one cold winter many years ago.

After a quick trip to the hardware store for $10 worth of PVC piping and some purple stuff, our kids were having fun in the sun.

The mom was ecstatic as well, but that's a story for another day.

I can't imagine forgoing the use of water when the solution is so simple and inexpensive. Anyone who's ever patched a broken pipe knows this to be true.

This is analogous to the current U.S. debt crisis.

To most people, the solution to a debt crisis is simple: get rid of debt.

It takes a Nobel Prize-winning Ph.D. from MIT to think otherwise.

But alas, the world continues to delude itself and pile more debt on top of debt: The U.S. debt is up to $15.9 trillion. The European Union is about the same. The UK's debt recently hit $1 trillion.

Uncle Sam's debt has doubled over the past four years, an annualized growth rate of 21%. U.S. debt to GDP is over 102%.

When debt grows at 21% a year and GDP grows at 1% a year, you have an unsustainable problem.

It was Richard Nixon who said if something is unsustainable, it must end.

The solution is simple — everyone knows what it is — and yet the debt problem won't be fixed until it gets much worse.

As we know from history, excessive debt causes political leaders to debase their currency.

One thousand years ago it meant adding lead to gold.

Today it means one guy in a federal office typing zeros on a laptop and “selling” it to another guy in government.

The reason we don't have inflation in spite of stimulus after stimulus is because money isn't moving.

Here is a chart of velocity: 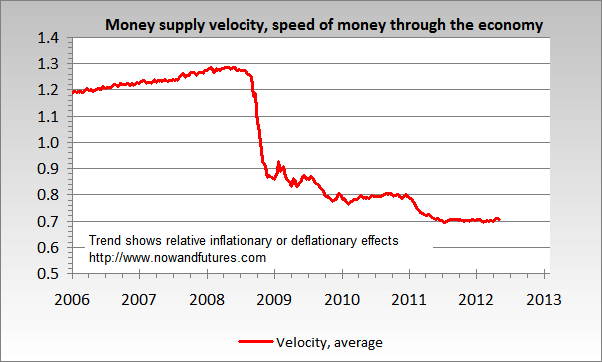 This is the curse of a deflationary debt spiral. Banks don't want to lend money because they can get it for free from the government. The household sector is busy looking for a job and paying down debts to buy more granite countertops.

But we are coming to a tipping point.

At some point, the velocity of money must go up.

It is then that you will see inflation and money rushing into the precious metals markets.

Check out these charts on silver and gold... 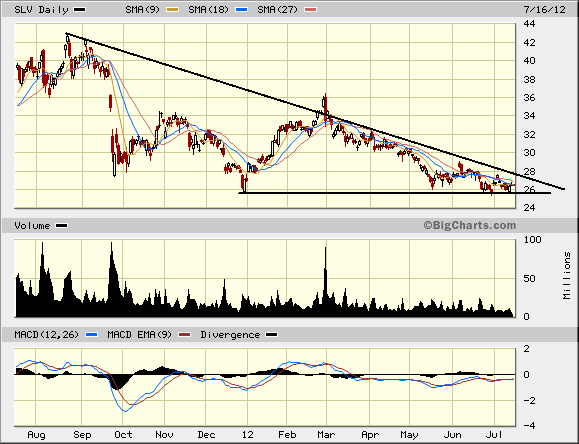 Gold will likely run sideways for a few more months before reaching a tipping point. 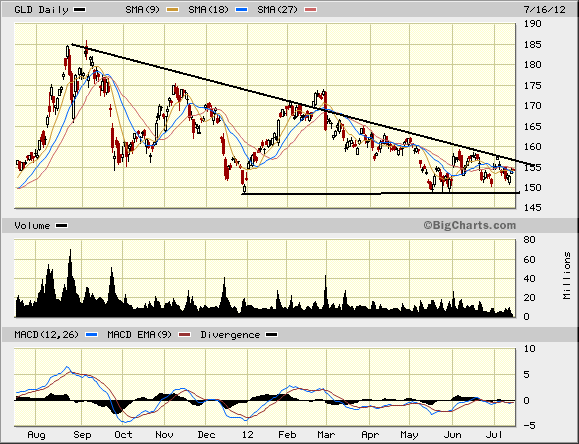