They Want Your Money

It has finally come to this: The EU has stolen the Russian oligarchs' stolen money.

In case you missed it, there has been a deal reached between the creditors and the bank of Cyprus to resolve the most recent banking crisis. The deal will shut down the Laiki Bank. It will also steal 30% to 90% of all deposits over 100,000 euros.

But the good news is the thieves at the IMF avoided calling it a "tax," and thus the banksters don't have to deal with the messy democracy of the Cyprus parliament.

Cyprus clinched a last-ditch deal with international lenders on Monday for a 10 billion euro ($13 billion) bailout that will shut down its second largest bank and inflict heavy losses on uninsured depositors, including wealthy Russians.

The agreement emerged after fraught negotiations between President Nicos Anastasiades and heads of the European Union, the European Central Bank and the International Monetary Fund — hours before a deadline to avert a collapse of the banking system.

Deposits above 100,000 euros, which under EU law are not guaranteed, will be frozen and used to resolve debts, and Laiki will effectively be shuttered, with thousands of job losses. An EU spokesman said no levy would be imposed on any deposits in Cypriot banks. A first attempt at a deal last week collapsed when the Cypriot parliament rejected a proposed levy on all deposits.

It makes you wonder who and why anyone would put more than 100,000 euros in one bank account...

Is it that hard to open a second?

Regardless, the stock market initially went up on news of this outrageous theft of savings by the bureaucrats in Brussels.

The bankers in New York like the idea of bankers in the Mediterranean being bailed out. Or perhaps it is the Russians moving their money to American penny stocks like Stereotaxis Inc. (NASDAQ: STXS), which was up 50% yesterday...

It is interesting that, as the global debt crisis moves and expands, each wave removes the creditors further from being held responsible. After Iceland stuck it to the London banks, every subsequent crisis has ensured the big banks get their money back, even to the point of dismissing sovereign nations and their duly-elected representatives.

The question is not so much who is next, but when — and more importantly to those of us who want to profit from it, where.

Where will people put their money now? The obvious answer is silver.

It is silver — and not gold — because gold has had a solid run and will take some time to consolidate. Most potential investors see gold as expensive at $1,596 an ounce, but silver seems a bargain at $27.72/ounce, especially when you consider that it was pushing $50 just a year ago.

Silver seems cheaper than gold because it is.

On top of that, there is real demand problems for physical silver. Dealers are quoting between four and six weeks for delivery. It will take you five weeks, at least, to get Canadian Silver Maples. And there are fears the Mint might suspend sales again.

In light of this, dealers are raising their prices well above spot. In Europe silver is going for $40 an ounce.

You can manipulate paper silver, but the physical is a little harder play games with.

All the anecdotal evidence says silver demand is robust — and despite this, the “paper” silver is down over the past six months.

This is about to change, as you can see on the Silver ETF (NYSE: SLV): 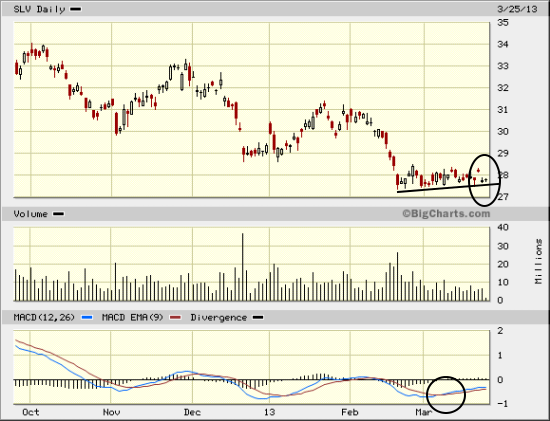 The chart shows a solid support line with a Doji yesterday. The MACD has crossed over below the center line and as you can see on the chart, every time that has happened over the past six months, silver has subsequently gone up in value.

Last week I put out an options trade on Silver Wheaton (NYSE: SLW), the blue chip silver mining company. I bought out-of-the-money calls going into earnings. My strategy was to play the buying momentum as people speculate on a positive earnings announcement. Using options, you can leverage up and make significant money from this small move.

It worked. Readers of Options Trading Pit made up to 41% in two days.

The trick to this strategy is to never hold through earnings, because — well, you never know.

Silver Wheaton Corp earned 50 cents in the fourth quarter and beat the year-ago quarter earnings by $0.09.

Profit increased 22.8% year over year to a record $177.7 million. The growth was fueled by a 53% year-over-year increase in silver equivalent sale that recorded 7.3 million ounces of silver and 33,000 ounces of gold sold.

This increase in sales and earnings is despite the fact that silver and gold were flat on the year, and the average cash costs per silver rose to $4.70 in the fourth quarter, from $4.06 a year ago.

Like I said, I'm buying silver, long and strong.