“Nothing good can come from the Federal Reserve. It is the biggest taxer of them all. Diluting the value of the dollar by increasing its supply is a vicious, sinister tax on the poor and middle class." — Ron Paul, End the Fed

Ron Paul has been running for president on a few simple ideas. Such as the idea that empires aren't good for the average person:

“Foreign aid is taking money from the poor people of a rich country and giving it to the rich people of a poor country.” — Ron Paul

Part of his plan is to audit the Federal Reserve and figure out where the money is going. The “Audit the Fed” bill recently passed the House of Representatives with a vote of 327-98.

Ideally, the Congress, which constitutionally holds the purse-strings of the nation, should want to know what's going on with the nation's monetary system.

But the Democrats in power don't want to look behind the curtain.

House Minority Whip Steny Hoyer, a Democrat from Maryland said, "I agree with Chairman Bernanke that congressional review of the Fed's monetary policy decisions would be a 'nightmare scenario,' especially judging by the track record of this Congress when it comes to governing effectively."

And Democrat Senate Majority Leader, Harry Reid, has vowed not to put it to a vote.

One out of four ain't bad.

Here's your stable prices. Since 1913, prices of goods have been in a stable uptrend because the value of the dollar has been consistently down. I'm sure you've seen this chart before. 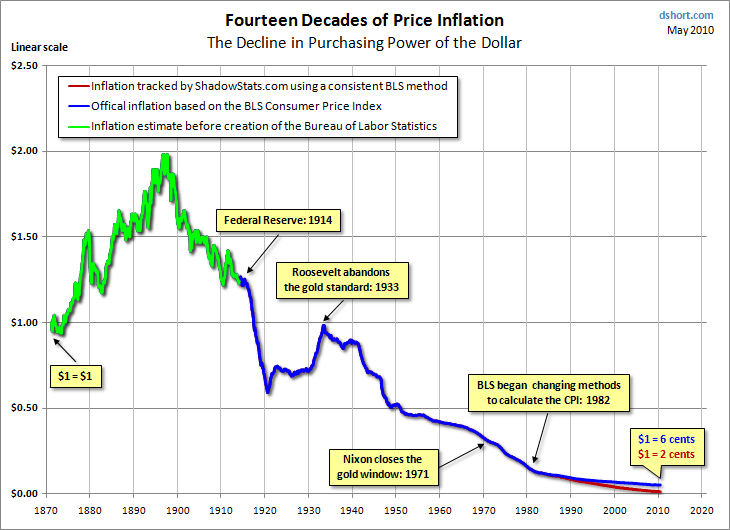 Your great grandfather, who entered this country with $1.30 in his pocket and dreams of a better life in 1913, really entered with about six cents in today's money – thanks to the Fed.

Bullet point number two, the soundness of the financial system. Over the past five years we've seen the "Too Big to Fail" banks survive on golden parachutes and obfuscation all after being bailed out by the Fed.

The numbers are dropping because there are simply fewer small banks. This concentrates the money in the top five banks and makes them more powerful, more arrogant, and more risky. And rest assured the bad behavior that led to the 2008 crash is still prevalent.

And that's just this this month!

I know what you are thinking. After so many lies and deceits the people and their representatives would demand justice. Perhaps a hard-headed government prosecutor would try to do what's right by going after these crooks. Surely there is a modern Elliot Ness, Samuel J. Tilden, or Roy Bean?

But remember, the last guy to successfully take on Wall Street was Eliot Spitzer, who was subsequently blown-up by the old “honey pot” routine and had to resign as Governor of NY in the midst of a call-girl scandal.

Meanwhile, the SEC goes after the Amish.

Where are the Perp Walks?

According to a new report by the Government Accountability Institute:

The Bush administration task force “obtained over 1,300 corporate fraud convictions, including those of over 130 corporate vice presidents and over 200 CEOs and corporate presidents.”

“Clinton’s DOJ prosecuted over 1,800 S&L [savings and loans] executives, senior officials, and directors, and over 1,000 of them were sent to jail.”

Under Obama, in the aftermath of the biggest financial meltdown in history, at a time when the average family's net worth has dropped 40%, when the lies and corruption are stacked one on each other like the sediment in the Grand Canyon – there have been a grand total of zero banking and CEO prosecutions.

Fight for the Little Guy

Harry Truman wouldn't have taken it no matter what Goldman Sachs had to say.

We have only an old, soon-to-retire Doctor from Texas who has nothing to lose.

The first move to restoring trust in the financial system would be to audit the Fed. The central bank has very low transparency and has operated under a cloak of secrecy for a century. It has never been fully audited by any outside source.

The Fed believes that any intrusion into its inner working would limit its “independence.” And that would be correct. But an institution that has failed the people so miserably should be made accountable.

Of course, it's Ben Bernanke's worst nightmare... because who knows what sorts of monsters will come crawling out of the slime.