Rivian Becomes the Largest IPO of 2021

It did what I expected it to do… it became the largest IPO in the world in 2021 so far.

All signs were pointing toward this outcome, especially with all the marketing hype and media coverage in the past few weeks.

Investors are loving the idea that they could get “in” early on a company that’s being called the next “Tesla in the making.” The company set its IPO price at a hefty $78 per share. On Friday morning, shares opened at $128.65. And as we started this week off, shares opened on Monday up at $130.80.

Rivian’s shares surged 57% in the first two days of being public. The company’s valuation is now near $120 billion. Rivian’s CEO, R.J. Scaringe, owns 17.6 million shares, so you say he’s stoked on Rivian’s IPO success over the past few days — putting the valuation of his shares near $2.2 billion.

I want to point out how insane this $120 valuation is — Rivian has yet to be profitable, lost $1 billion in the first half of the year, and is expecting less than $1 million in sales for its third quarter. Not to mention, it only recently started production on its vehicles.

As of right now, Rivian has a higher valuation than traditional automakers like Ford (NYSE: F) and General Motors (NYSE: GM) that have been around for decades in the auto industry.

With that being said, Ford came across an investment opportunity before Rivian’s IPO. It took that opportunity, and so did Amazon (NASDAQ: AMZN) — both companies have benefited from Rivian’s IPO and the company's current market performance. In 2019, Amazon took a 20% stake in Rivian and committed to purchasing 100,000 delivery vans that’ll be made by Rivian.

Rivian holds rank as the No. 2 automaker based on its valuation. Tesla (NASDAQ: TSLA) still holds the No. 1 spot. Tesla went public in 2010 and its initial capitalization was $2 billion, and it took the company until 2020 to reach $90 billion. So Rivian ranking No. 2 in valuation after only being public for three days and a company for less than a decade is a little baffling.

Tesla’s founder and frontman, Elon Musk, had some words about Rivian and did what he does best — tweeted about the company… 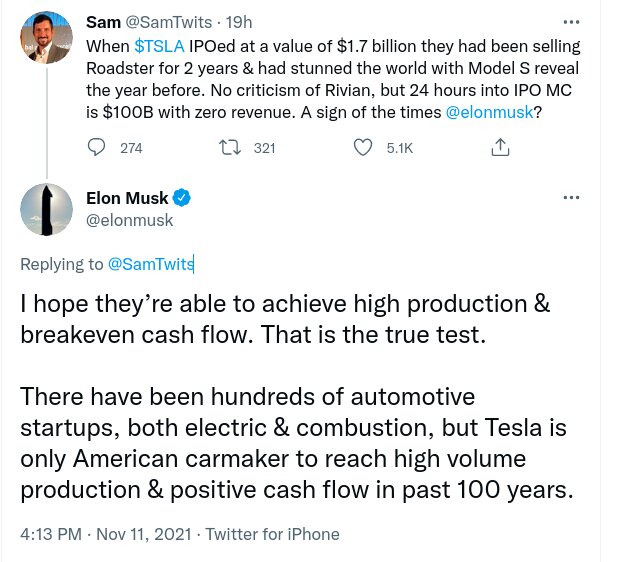 What I believe happened here with Rivian and its extremely successful IPO is that investors are hungry for electric vehicle opportunities.

They want to be ones that invested in the next big EV maker, especially one that’s offering products like electric SUVs and pickups, which is a part of the EV market that has been untouched as of yet but has been a lucrative part of the automotive industry. While, yes, Tesla did unveil its Cybertruck at an event in 2019 and initially had a release date of late 2021, now the company plans to start production in late 2022.

Investors love a good story, especially when a new company is being compared to an influential company like Tesla. Shares of Tesla have been trading around $1,000 per share. Almost every day there’s a headline about Tesla or Elon Musk.

That’s why when people started comparing Rivian to Tesla, attention was drawn to Rivian and its aspiring future. Investors are seeing the long-term potential — that in 10 more years Rivian stock could be trading near the level where Tesla stock is currently.

However, given where Rivian is right now, I think we should be cautious. The company just had its IPO. It’s still new to the market and it’s still like that new shiny toy on Christmas morning.

There’s a lot that needs to be unraveled about this company. And with time those things will reveal themselves.

I expect in the next six months to a year, the company will announce its quarterly earnings and expectations, which will give us a better outlook on what the company has to offer financially and within the EV market. You’re going to want to pay attention to whether Rivian will be able to meet its production goals and how it plans to get to profitability.

The EV market is heating up like never before, and the competition is rising, which could eventually push Tesla out of the spotlight it’s been in for the last decade or so.

This is going to be an interesting (and lucrative) battle to watch.