I’m excited to introduce to you a new proprietary trading system that has outperformed the market the last 12 months by 76%.

In fact, the recent Russian invasion of Ukraine triggered a trade that made us a 206% profit within a month of initiating it.

It was done by our trading director, Sean McCloskey, whose entire trading portfolio has averaged 105% on every trade he’s made for the past 12 months.

I’m going to show you exactly how he did it, when, and why. And I want you to pay very close attention because it could make you a small fortune too… sometimes in a matter of weeks.

It all started on January 2 of this year. It was a Sunday, and Joe Biden had just ended a call with Ukrainian President Volodymyr Zelensky.

It was reported that Biden told Zelensky that Washington and its allies “will respond decisively” if Russia moved to invade its pro-Western neighbor. It was meant to calm the public about a potential start of World World III.

Behind the scenes, however, diplomacy was breaking down. And those “in the know” (the true insiders) were preparing for war.

And it wasn’t just world leaders preparing for war but also super-savvy traders too. They saw something happening in the oil futures market...

And Sean McCloskey was all over it.

You see, the day after the White House called the Ukrainian president, trading volume in the crude oil market spiked to the upside. It went unnoticed to most investors and traders. In fact, trading in crude oil was 4x higher than it was the day before… and it was the highest trading activity in a year. 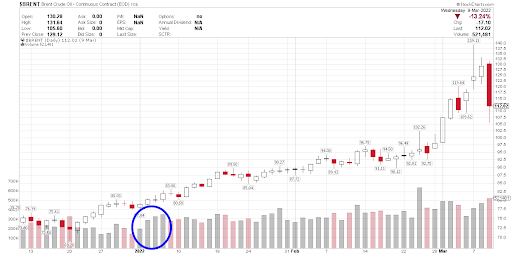 Something big was about to happen.

But again, 99.9% of traders and investors didn’t notice it.

In fact, the actual price of oil only moved a few cents between January 2 and January 3. But the elite traders were going very long the price of oil.

And on January 5, he issued a trade.

But instead of buying a futures contract on oil, he did something brilliant.

You see, he's discovered a way to play oil and oil stocks for pennies on the dollar...

And on that day, he issued a super-leveraged trade on Brazilian oil producer Petrobras (NYSE: PBR) for just $0.18 a share.

Imagine making a 206% gain in a little over a month. We're talking about the equivalent of five years’ worth of Dow gains in just 30 days!!!

He recently did it again with a uranium producer called Denison Mines Corp. (NYSE: DNN).

He’s been doing this over and over again for months.

But here’s the deal — it’s about to be a turkey shoot for Sean as we enter what I’m calling the “Age of Instability” as a result of market turmoil brought on by Putin.

In other words, market turmoil is creating dramatic market inefficiencies that will offer traders like Sean easy pickings. We're talking about a euphoric environment for Sean and his traders... and it’s going to last for a very long time.

In fact, Russia just warned that it's willing to take the price of oil to $300 a barrel in retaliation over the sanctions the West has placed on it.

Will that happen? Nobody knows.

But I do know that commodities are going to make massive moves to the upside as nations, industries, and companies scramble to find safe and secure supplies of vital commodities like oil, gas, uranium, fertilizer, industrial metals, and other vital stocks that make life normal.

A lot of people are making small fortunes following Sean’s trades. I’m one of them.

Sean will show you exactly how his trading system detects these trades. Quite frankly, it’s fascinating.

You won’t be disappointed.