It was all over the news this week... 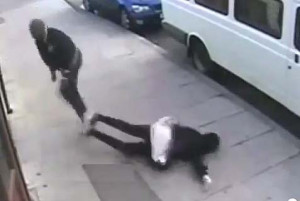 Stories about the knock-out game. A game played by young black kids who approach unsuspecting white people, knock them out, then run off.

Clearly these were racially-motivated incidents that, many in the media were quick to point out, weren't drawing the appropriate attention from civil rights leaders.

After all, if it were white kids knocking out black people, you better believe Al Sharpton would be first on the scene.

Of course, while race is certainly an issue in these recently publicized events, it has also been an issue in the past, when this same game was being played, but not on white people.

You see, a couple of years ago I saw a horrendous video of a young black man playing this very game, but the victim was a homeless black man. The video infuriated me. I was disgusted. But apparently there were a lot of folks in the media – folks who have been very vocal this week – who didn't make a peep back then.

This poses the question: Why is it that when a homeless black man is victimized by such a horrible “game,” hardly anyone hears about it. But when white people are the victims, it's on every major news show?

Just as those black kids who are going around punching white people now are acting with racial motivations, the media's disinterest in this “game” when homeless black people are getting knocked out seems just as racist.

Of course, I'm no angel either. After all, I certainly didn't cover the “knock out” game when that black homeless guy was being laid out. And only now am I piping up. This has definitely caused me to look at my own motivations for covering current events.

Was that homeless man not worthy of my attention?

I don't think that most in the media are acting with racist intentions. But this should be cause for all of us to take a closer look at how we value human life.

As well, instead of lashing out with furor over these recent racially-motivated incidents, perhaps we should all look at the root causes of such behavior.

Regardless of the color of your skin, you must agree that folks who do this kind of thing were likely lacking structure, discipline and love growing up. The breakdown of the family unit leads to this kind of behavior. We're not born with the desire to inflict harm against innocent people for no rational reason.

I'm not saying I have the answer. But I think it can be successfully argued that in the absence of responsible adults, children will only facilitate the continuation of irresponsible behavior. So it is in all of our best interests to value the importance and necessity of a strong family unit.

And if you think you can stomach it, below you will find the video which I referenced earlier in this piece. It's no more or no less despicable than the ones we've been seeing all week.