Collision Course for Debt and Stimulus

Last week, I started offering up my forecasts for the stock market over the next year.

It's a useful exercise to look forward, think long-term, and consider the implications of current events.

I don't mind extrapolating corporate earnings over the next year.

And what should happen to stock prices based on earnings is a fairly routine exercise, too... because people buy stuff. And that doesn't really change much.

Studies show that 12-month earnings forecasts are usually only off by around 10%. If I miss a price target by 10%, that's fine; 10% is well within an acceptable margin for error. And missing by 10% means I've still made money.

You may recall I saved my forecasts for oil and gold (and commodities in general) for this week. I'll tell you right now, getting a read on where oil and gold are headed is a much more difficult task than earnings. And there's just one reason: quantitative easing.

The Fed's money-printing program is a huge uncertainty for investors...

But gold and other commodities?

Gold doesn't back loans and it doesn't pay an interest rate. It doesn't have a P/E ratio. Traditional valuation metrics for gold are comparative.

How much of something else will gold buy?

There's one thing we can definitively say about gold: It likes liquidity.

Then in spring of this year, when the Fed suggested that it might lower, or "taper," the amount of money it would spend every month, gold prices got creamed, falling from $1,500 an ounce to $1,150.

Relying on the Fed for anything doesn't fill me with confidence. Even a child can see that the massive money creation by the Fed, and massive debt creation from the government, is not sustainable. They are opposing forces on a collision course.

But who's going to blink?

Congress won't pass a budget. And if Janet Yellen becomes the new Fed Chief, she will attempt to continue QE3 as long as possible. It's a standoff.

And that is good news for gold prices...

Gold prices have rallied ever since Yellen become the front-runner for Federal Reserve chair. As I write this, gold is around $1,350 an ounce. A move to $1,500 over the next month or so seems inevitable.

Then Yellen gets nominated Fed Chief, and gold takes off again, that's what.

I expect we'll see a launch to old highs above $1,700 after Yellen confirms the Fed will continue to pump cash into the system and devalue the U.S. dollar. In fact, I think it's likely we'll see new highs for gold, perhaps as high as $1,850 an ounce.

But be prepared, because the instant it appears that the Fed will taper QE3, gold (and stocks) will sell off hard. This will likely occur in spring: March or April.

I expect stocks will recover first, as the assumption will be that the taper indicates an improving economy.

Then, in the September/October time frame — with gold trading back to the $1,100 area — we will see the mother of all buying opportunities...

The dollar isn't going to lose its luster as the global reserve currency until there are fewer of them in circulation. That happens after the Fed ends QE3 and the true state of the global economy is revealed. 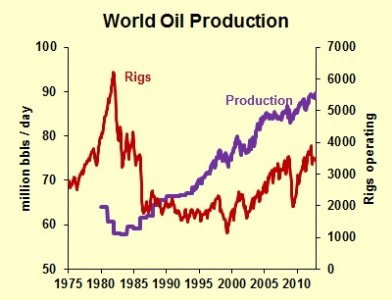 Oil prices are a good indication of global growth expectations: When growth is strong, more oil is consumed, and prices rise.

From that perspective, the current strength in oil prices can be interpreted as a bullish indicator for growth.

During the era of low prices, the number of drilling rigs in operation around the world was 1,900 on average. Now we are at nearly double that pace — and we have been for nearly three years.

And, once drilling is complete, oil production begins to rise faster than new drilling takes place...

There's no doubt that America's growing proficiency at tapping shale oil reserves has quickly reversed our growing dependence in foreign oil. You can see this dynamic in Texas' Eagle Ford shale field. 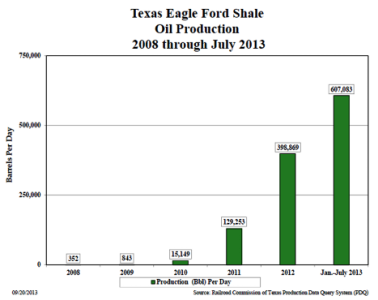 That is simply astounding growth. And it's created a massive surplus of oil in storage right now.

Case in point: When the Department of Energy recently released weekly oil inventory data, it was expected that inventories grew by 1.55 million barrels. The actual number was 6.8 million barrels.

We now have more oil in storage than we've had in 30 years. 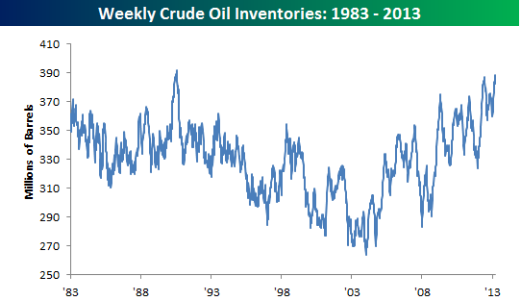 U.S. oil production is so strong that the International Energy Agency (IEA) expects the United States to become the world's #1 oil producer in 2014.

It's basic supply and demand: When supply rises faster than demand, prices fall.

So it makes sense to expect oil prices to be lower in 2014.

Of course, shale oil is expensive to produce, often in the $60-$70/barrel range. And oil itself is perhaps the world's most indispensable commodity.

Still, it seems as though a move into the $90s is likely over the next few months... and it wouldn't be surprising to see oil prices average something below $100 in 2014.