Congratulations! You made it...

After a year of extreme volatility and excessive whipsaw action, you made it through 2011 with us — with profits in hand.

The same can't be said for some of the "greatest minds" on Wall Street, our competitors, brokers, financial "experts" and hedge fund managers still apologizing for an appalling money-losing year.

Just one look at this Zero Hedge chart is painful proof: 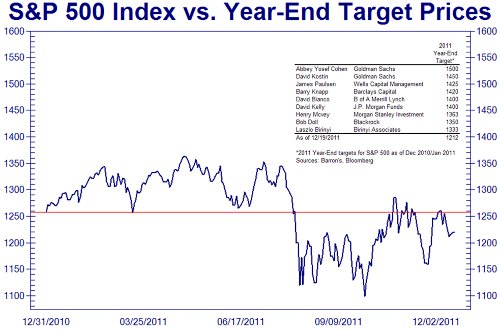 Even as you read about the Fed pumping billions more into global economies, the death of Osama and Kim Jong-Il, Europe's credit nightmare, imbecilic actions in D.C., stupidity on trading room floors, the arrest of Bernie Madoff, euro fumblings...

Even as you watched Japan get rocked by earthquakes and tsunamis of epic proportions, the Arab Spring, the EU fiscal crisis, the toppling of Gadhafi, the fiscal showdowns in Congress, and the Occupy Wall Street protests...

You did well with us.

While next year will be even better, what'll actually happen is anyone's best guess...

I'll be the first to admit I have no idea what will come to pass in the New Year.

It's hard enough to make sense of the markets, let alone forecast what will happen in 2012, given the world is supposedly coming to an end next December.

It's true we made some accurate predictions this past year: In 2011, we said gold would rally beyond $1,500, and that silver would break $30.

We accurately predicted $100+ oil... We foresaw rare earth prices skyrocketing... We explained why housing and unemployment wouldn't recover much...

When Main Street has just about given up on Wall Street, withdrawing billions of dollars — who's to say what'll happen in the year ahead?

But hey, I'll give it my best shot.

Here are some predictions for 2012:

Also, we can expect investors to invest in the Dogs of the Dow, yet again. Investors buy the 10 Dow stocks with the highest dividend yields, cash out by the next year's end, and repeat.

In practice, the theory isn't too shabby...

The logic behind this investment strategy is this: When you buy these stocks with the highest yields, you're buying the high-quality companies that are out of favor on Wall Street — which makes them bargains.

We'll have the full lists of the “Dogs” shortly.

This is what's referred to as the famed "January Effect."

Investors who bought 2010's worst performers profited in 2011 from their bargain buys:

Will this strategy work 100% of the time?

Of course not. Nothing has 100% success. If it did, we'd all be multi-billionaires.

You're simply betting that the worst performers from the year before will be picked up as bargains in the following year.

So buy some of the worst performers and hold them for a year.

Keep in mind, we're not buying Citigroup or other pitiful stock names; we're buying solid names that will be around for a while.

Netflix (NFLX), as far as I'm concerned, will slip even lower.

One of the best ways to trade these beaten-up stocks is to buy long-dated options and/or the underlying stock, too. We're looking to play them in Options Trading Pit shortly.

Have a happy, healthy holiday — and a profitable 2012,