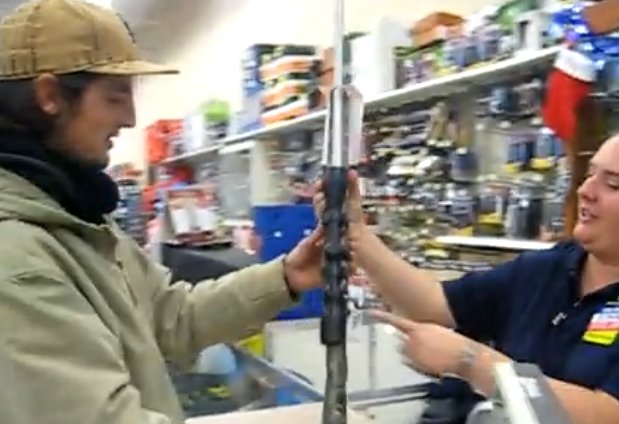 I don't often get behind mega stores. I've seen how they impact small communities and local businesses.

I proudly overpay for my running shoes at boutiques instead of buying online. I'll hit the farmer's market on Sundays. And I'd rather eat from a local, hand-tossed pizza joint than order Dominos... even if Dominos does have an awesome app.

But I also like freedom. And I believe that a business should be able to operate how it sees fit to make money. That's why they're there in the first place.

Or so I thought.

If you've been living under a rock the past few days, the church – one small group of freedom-hating nutjobs – is demanding that Walmart (NYSE: WMT) shareholders be able to vote on whether the nation's largest firearms retailer should be able to sell... firearms.

It sounds nice, for sure. After all, according to them, guns kill people. They're bad. Nobody should have them. But, because of that pesky 2nd Amendment, since they can't make guns illegal, they want to get rid of people's access to firearms.

Cut the head off the snake, so to speak. Walmart will be fine. They can sell other stuff... like shirts that dissolve when they get rained on and plastic jewelry.

But there are a few problems here that really tick me off.

First, that the courts (read government) are getting involved in how a business operates. Nothing new, here. They've done a bang up job with retirement, health care, and the mail... why not.

Second, that shareholders should get the right to tell a business how to make money and what it can sell. Look, if you really know how to turn a profit better than one of the largest shopping centers on earth, open your own.

Letting a shareholder meddle with a company's operations is about as sensible as letting my neighbor's ten year old perform spinal surgery because he got the board game Operation for his birthday, and he can successfully remove the pesky wishbone without Cavity Sam's nose lighting up.

That's like letting shareholders decide that Wendy's can no longer sell Frosties. Sure it's not the largest part of the fast food chain's revenue, but it is the company's right to sell delicious chocolate milkshakes with a spoon if it wants to.

Third and most importantly, this church is forgetting the fact that Walmart is the nation's largest retailer of firearms. And considering that we have more guns in America than people, I can bet that, if anything, shareholders voting on this topic will overwhelmingly move in favor of letting their beloved source for firearms and affordable ammo keep filing background checks in the future.

Bang a gong somewhere else, hippies. I'm bullish Walmart, and I don't want management forced to mess around with a solid revenue stream.