Politics Aside, Betting on the Election Is a Terrible Idea 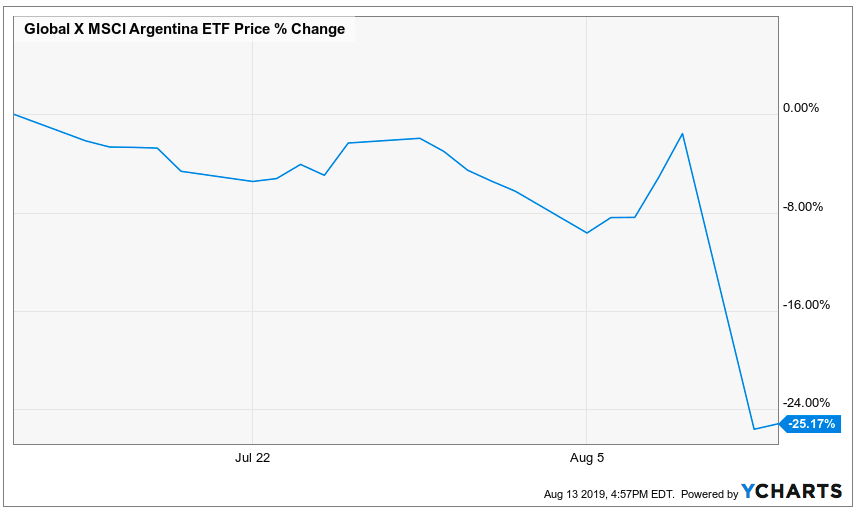 Americans on both sides of the aisle are already busy incorporating Argentina’s misfortune into their political arguments, despite the many differences in size, financial position, and institutional strength between the U.S. and Argentina.

Here at Wealth Daily, we can’t predict the future, and thus we can’t definitively guarantee that one of these things won’t happen. But they’re both about as likely as Jill Stein becoming our next president.

And regardless of your politics, betting on the election is a terrible idea. Today we’re looking at the many reasons you should keep party politics out of your investment decisions.

The Underwhelming History of Political Investing

For starters, American investors have a long history of getting burned by their own politically biased hunches.

As Barry Ritholtz wrote in The Washington Post a few years ago, the last two decades have provided two great examples of this phenomenon. One burned left-wing investors, and the other burned right-wing investors.

Back in 2003, the market was starting to stabilize after the dot-com bust and post-9/11 recession had brought the S&P 500 down almost 40%. To kick-start the recovery, President Bush passed a sweeping round of tax cuts — and liberals were not happy about them.

Sure, some of the left-wing criticisms of the Bush tax cuts had some validity. They did expand the deficit and disproportionately benefit the wealthy.

But the stock market didn’t care. It really likes tax cuts. And liberal investors who stayed out of the market after the Bush cuts missed a 37% rally in the S&P 500 the following year. 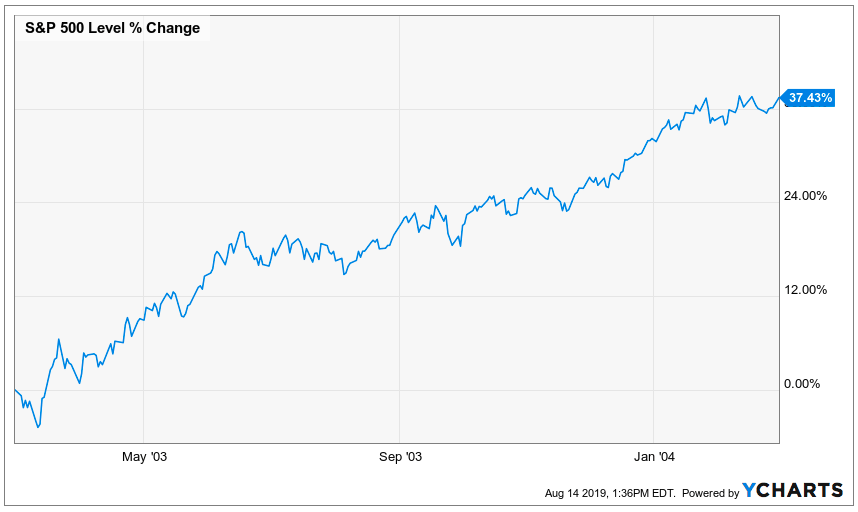 Six years later the same thing happened in the aftermath of the Great Recession — except this time it was right-wing investors who missed out.

In 2009, the S&P 500 had started to recover from the bear market that had eaten more than half of its value. To help it along, President Obama passed another sweeping round of tax cuts and pushed for regulatory reform in the financial sector. Conservatives were not pleased.

Wall Street Journal op-eds started to blame President Obama for the Great Recession (which had started in late 2007). Some right-wing investors stayed out of the market, pointing to Obama’s push for banking reforms as evidence of his “socialist” agenda.

Was President Obama big on government intervention in markets? Sure. He was certainly more of a “big government liberal” than his last few predecessors.

But the stock market didn’t mind. It was just happy the storm of the Great Recession had passed. And conservative investors who stayed on the sidelines after 2009 missed a 51% rally in the S&P 500 the following year. 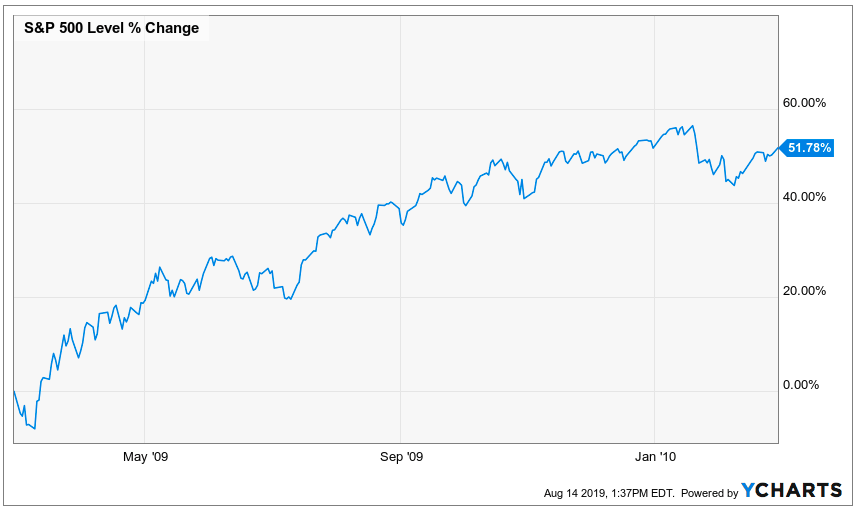 In other words, recent history shows that liberals and conservatives alike have shot themselves in the foot by allowing their political beliefs to guide their investing decisions.

But there’s another reason you shouldn’t let the outcome of the 2020 election influence your portfolio: Both parties are pushing financial narratives that just aren’t accurate.

A few months ago, President Trump took to Twitter to warn of economic chaos if he lost the 2020 election.

He was echoing a common sentiment among certain parts of the conservative movement: that the last few years of economic growth are Trump’s doing and that if a Democrat takes the White House in 2020, they’ll push through extremely radical policies that will destroy the economy.

First off, it’s far from certain that the “Trump Economy” has “a long way up to go.” The yield curve is inverted, and the major indices have been whipsawing up and down for the last few weeks. For all we know, this bull market could end before 2020 for reasons that have nothing to do with the election.

Second, it’s worth noting that Joe Biden — one of the most economically moderate members of the Democratic primary pack — is consistently leading in the primary polls and that Republicans are favored to keep the Senate in 2020.

That means a Democratic president in 2020 would still face plenty of checks and balances, both from Republicans in Congress and from the moderate flank of their own party.

With that in mind, it’s also worth considering that Democrats have a habit of campaigning on radical economic changes but then delivering fairly small reforms.

If Democrats take the White House in 2020, there’s a decent chance that seemingly radical Democratic policies like Medicare for All will get “walked back” before passage in the same way.

Democrats, for their part, have also been pushing dubious and alarmist narratives about how Trump is going to wreck the markets.

All the way back in October of 2016 — before the election had actually happened — Heather Long, a liberal-leaning financial commentator for CNN Money, posted an article with this lede:

Of course, that didn’t happen. The major U.S. indices went up by double digits in the year after Trump’s election (though some overseas markets, like that of Mexico, did get hit).

What’s more, the left-wing rhetoric about Trump and the stock market tends to focus on the trade wars. And to be clear, trade wars are bad for the stock market. Wealth Daily editors have explained why here and here.

But history doesn’t necessarily endorse the idea that trade wars cause market crashes.

Below you’ll see a graph of the S&P 500 during America’s last major multi-front trade conflict: the early 1970s OPEC embargo. As you can see, the disruptions to the global oil trade weren’t good for the market, but they caused it to run sideways — not to crater. 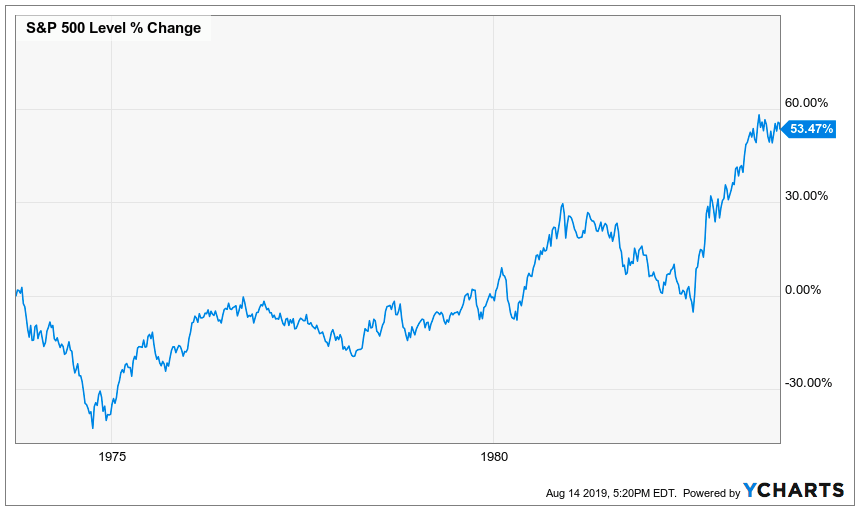 Indeed, the academic consensus on the effects of trade wars is that they cause stagflation (slow growth and rising prices), not big crashes. Many Democrats clearly aren’t familiar with this consensus.

Not only are both parties using bad economics to push political rhetoric, but they’re also encouraging investors to do something that never ends well.

After all, the U.S. isn’t Argentina. We’re a big, diversified economy with a healthy credit market and a strong rule of law. That means our economy just doesn’t depend as much on who’s running the government as theirs does.

You shouldn’t let politics into your portfolio. Any time you hear the word “Democrat” or “Republican” pop into your head while considering your investment options, get up and do something else for a while.

And if you want to get ahead of the next crash, check out Bull and Bust Report for a less political — and more accurate — way to do it.

Just remember: Investing based on your political beliefs is a great way to raise your blood pressure while lowering your account balances.