Yesterday, we had lunch down at the harbor.

The restaurant was one of those places you bring clients you want to impress...

They serve oysters from Cape Town and Newfoundland. It's the type of joint where they make up names for food like Royal Osetra Caviar or Moulard Duck Foie Gras en Terrine.

We were talking stocks, the possible collapse of the global economy, and other investment ideas over Fat Tires and cheeseburgers.

A good buddy of mine, a veteran Wall Street savant, told me he was down to four positions: three were penny gold stocks he picked up on the cheap years ago and one was a long-term arbitration play where he was short gold and long platinum.

That was interesting, so I asked him point-blank what's going on with platinum.

He said, “I have no idea, I've just never seen it before.”

Sometimes an investment strategy is as simple as crossing the street...

Here's the gist of it: 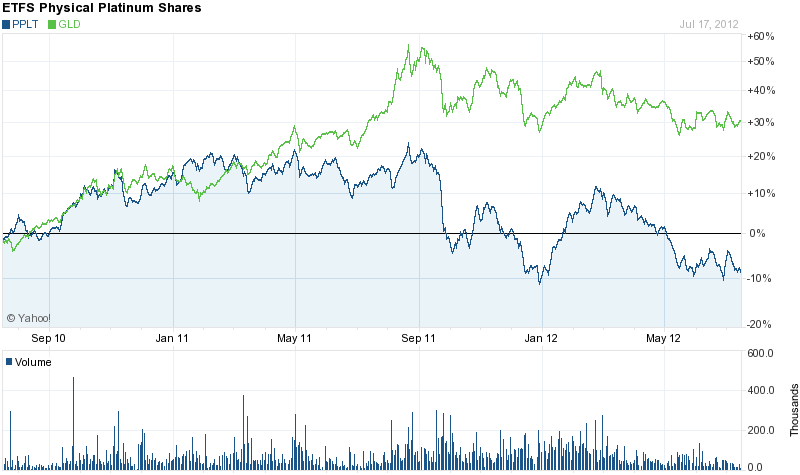 Platinum is priced almost $159 under gold. 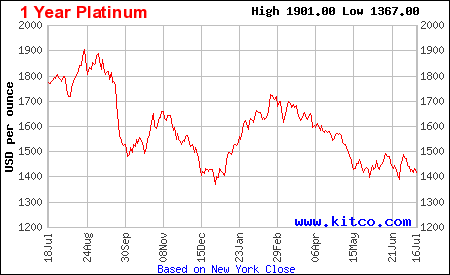 Over the last 25 years, the price of platinum has been cheaper than gold exactly three times... but never this cheap.

Platinum is 15 times rarer than gold.

Two-thirds of it is used in industry — including catalytic converters for automobiles — and the rest is used in jewelry.

Car sales are up this year.

According to data by German automotive industry association VDA:

New passenger car sales in major global markets were in June nearly 14% stronger year-on-year at 4.90 million units due to buoyancy in the US and China and the recovery of the Japanese market. The figures reflect more than three quarters of total global sales.

US sales of cars and light vehicles rose 22.2% to 1.28 million units, while China recorded a 15.6% hike in car sales to 1.11 million units after average annual growth of 8.7% over the first half-year.

Car sales in Japan bounced back 46.8% from the earthquake-related depression in the previous year to 432,600 units, extending the recovery phase into the ninth month.

Furthermore, Europe and the United States are getting tougher on emissions requirements in all vehicles.

India and China are moving up the economic ladder far enough to start requiring catalytic converters.

Even if car sales remain flat, platinum demand will increase.

As an aside, the last time I was in India I rode in an auto-rickshaw. There was a sticker that said something like, “You are riding a clean, environmentally happy vehicle powered by unleaded fuel.”

The surplus caused by the slow economy dropped the price of the white metal.

This in turn caused miners to idle production.

The vast majority of platinum mines (70%) are in South Africa and they're having a hard time keeping them open — labor costs and strikes have been coupled with electric blackouts and higher prices.

According to NBC News:

Power outages, industrial unrest, and absenteeism are regular problems, and the industry has serious safety issues. In 2011, 17 Anglo American employees died in workplace accidents. Of these, 12 worked in the FTSE 100 company's platinum business, which was subject to 81 regulatory safety stoppages last year.

A few days ago, the CEO of one of the smaller miners, Aquarius Platinum (AQP), was whining about production costs:

“We seem to be one of the few companies in the platinum industry that is willing pro-actively to take the required tough decisions,” Chief Executive Officer Stuart Murray said.

“I would hope that the other industry players follow suit and cut the unneeded production that is depressing the industry.”

Half of all platinum production is under water and costs are expected to be $1,523 per ounce in the fourth quarter.

A tipping point is looming.

More mines will shut down... or demand will pick up.