I've talked to you about capitulation from oil companies before. On August 17, I wrote:

Capitulation means simply giving up, or "ceasing to resist an opponent or demand."

In the investment world, capitulation has a special meaning. When we talk about capitulation in relation to investing, we are talking about the point where investors give up and sell their assets, no matter the price. Capitulation happens after sharp sell-offs, after investors have taken a brutal beating at the hands of sellers. Losses grow and grow until it looks like everything could be lost. They sell because they just want the pain to stop...

With oil, we know that prices have been crushed because Saudi Arabia started pumping as much oil as they could in a concerted effort to crush oil prices and American shale oil companies. The strategy has worked: close to 70 U.S. oil companies have declared bankruptcy. And companies like Freeport-McMoRan (NYSE: FCX) have sold their oil assets for pennies on the dollar. They just wanted the pain to stop...

I've been watching the Saudis for signs that they, too, want the pain of low oil prices to stop. After all, they are losing a lot of money. They've sold bonds, they've dipped into their foreign exchange reserves, they've cut spending, and they've even floated the idea of selling part of the state-run oil company, Aramco, to help fill the 13% budget deficit. Saudi Arabia is teetering on the brink of recession.

Now, Saudi Arabia is having to bail out its banks to the tune of $5.3 billion. Liquidity is tight, and Saudi banks can't lend. And it's all because of low oil prices.

This week's informal OPEC meeting may mark the point where Saudi Arabia finally capitulates, where they finally say enough is enough and act to support oil prices.

Every other OPEC country wants to see a production cap that will help ease the oversupply and push prices higher. Venezuela, Libya, Russia, even Saudi Arabia — they could all stand to take in more in oil revenue. (Yeah, I know, Russia's not OPEC, but it is important to the discussion.)

I can't guarantee you that this is the week it finally happens. But it really is just a matter of time before the Saudis give in. Owning quality U.S. oil stocks is a good idea.

Are you paying attention to Twitter (NYSE: TWTR)? The company started streaming Thursday night NFL games last week. It has 10 of these games this year, and the next goes tomorrow night.

Twitter has been frustrating investors for a while now. But I remain convinced that there is value there. Twitter is where news breaks, and the streaming sports thing is just getting going. If current management can't figure it out, somebody else will.

Twitter shares closed at $18.49 that day. But on Friday, the stock closed at $22.62 as buyout rumors picked up in intensity. That was a 22% jump for the stock price.

I had some call options on Twitter that jumped 9,233%. Here's a screenshot of my sell order... 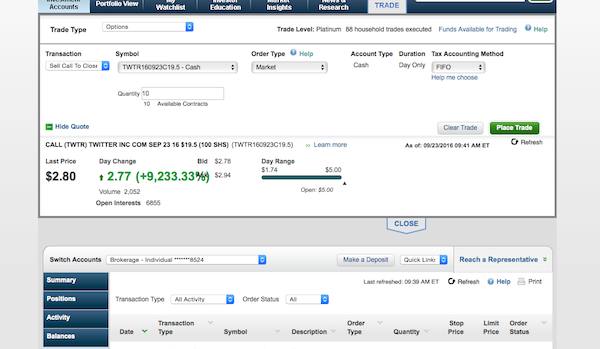 Yeah, I've been touting Twitter for a while now. And I just recommended the stock to my Wealth Advisory subscribers at $18.11, too. So, congrats if you made some money. The stock has been a great one to trade, and it's probably not done. I think a buyout will get done around $25 a share.

Then on July 21, Relypsa got the buyout at $32 a share. If you bought the stock when I recommended it here in Wealth Daily, well, you did pretty well.

I told you on Wednesday that I've got another nice little biotech that I think has similar potential to double your money or more in the coming months. I'm done with my research, and I'll be letting you know about this stock on Wednesday, so stay tuned...

While I get that uncertainty about our next president will be an issue for the stock market, the real issue right now has to do with earnings.

Three weeks ago, the trailing price-to-earnings (P/E) ratio for the S&P 500 was sitting at 24. That's kind of high. But investors were OK with that because analysts see a big 13% jump for earnings in 2017. That estimate includes a whopping 10% earnings growth for the fourth quarter. We haven't seen that kind of earnings growth since 2011!

And we're not likely to, either. Because as this chart from FactSet shows, third-quarter earnings estimates are currently being lowered. 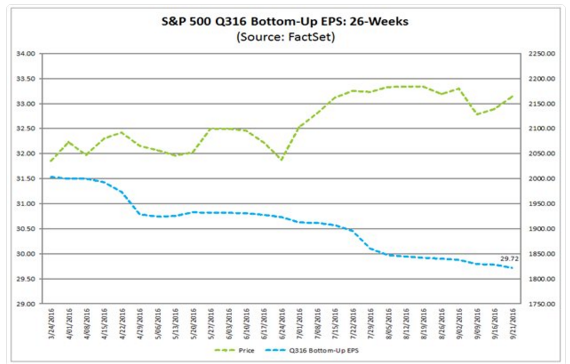 And I KNOW they aren't done lowering fourth-quarter estimates, because they haven't even started lowering them. But don't worry, they will...

Right now, there is a disconnect between earnings expectations and reality (prices). This disconnect will likely resolve with stock prices coming down to be in line with earnings growth.