I'm taking dance classes at the local Parks & Rec. with a stunning brunette, which is why I'm shuffling my feet around on Sunday nights at eight.

The crowd is mixed; twenty-something hipster couples and old guys who have difficulty with their gig lines.

The instructor is a cross between Wayne Newton and Telly Savalas: a black silk shirt, shaved head, and a nose like an organic potato.

He sucks his microphone like a lollipop and spits out a steady stream of advice: "One, two, hook the toe, slide back, twirl..."

The chicks love him, of course. And heck, I was even having a good time — right up until Wayne Savalas swished over during the break.

My H1 was in the parking lot. It's shiny, yellow, and chews diesel like a Mongolian wrestler at a yak roast.

Wayne obviously saw me pull up and feels he should enlighten me about his new Chevy Volt getting 60 miles per gallon... And why would I drive something that sucks up so much gas and destroys the environment?

I told him that I was fully invested in oil explorers. And with the trouble in the Middle East launching my shares, I could drive a Semi for life... 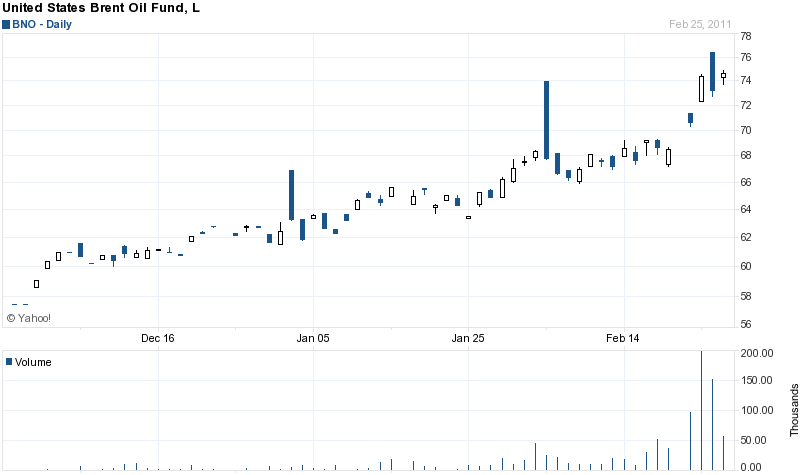 Yes, he said, but is this more of a trade on the Arab revolutions, or does it have more to do with the destruction of the dollar?

Wayne pointed out that the dollar/euro has hit a four-month low and seems to be heading lower.

What is most concerning is that during this particular period of global uncertainty, the dollar has lost its traditional safe haven aspect. 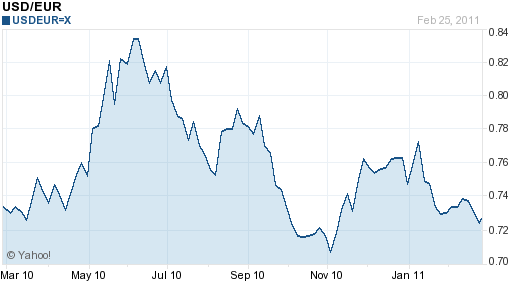 “The dollar is down as investors are turning to the yen and the Swiss franc is hitting record levels. The Fed is hell bent on destroying the dollar. Unemployment remains high and they are blind to inflation. The Bernanke will continue to keep interest rates near zero.”

“Don't forget about the huge, and ever increasing budget deficit, and the prospect of a government shutdown on March 4,” he replied.

“The Chinese and Indians are actively hiking rates to shut down inflation. Furthermore, the dollar has been overvalued for years. The fact that it is no longer a reserve currency suggests that runaway inflation is six months away.”

“Buy gold,” said the brunette, tossing her hair back and pulling this chart out of her Vera Bradley purse. 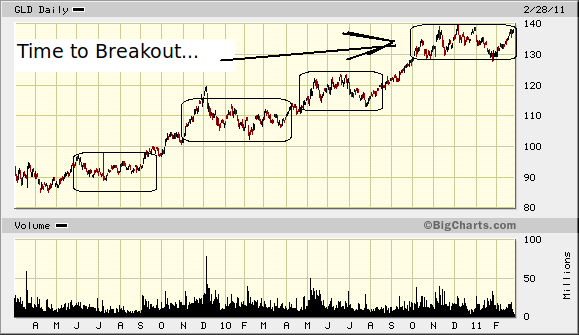 “As you can see by this chart, gold tends to consolidate through a sideways pattern before breaking out. Right now, gold is just threatening its all-time high of $1,434.10 which we last saw in December. And as you know, these coiled spring consolidation patterns tend to go up as much as they go sideways...”

“So, what are you thinking?” Wayne asked.

Then he looked at the clock over the basketball hoop, clapped his hands and said, “Let's Waltz.”