The Biggest Obama Scandal Yet!

Monsanto execs say they are baffled by the reappearance of GMO “zombie wheat” in Oregon.

I guess by "baffled," they mean they're trying to figure a way to ensure they are not held liable for fouling up a small farmer's land with an old version of the company's unapproved genetically modified organism.

As reported by the USDA, a discovery of a wheat variety developed by Monsanto (which is resistant to its Roundup herbicide), was discovered on a small farm in Oregon. Yet no one seems to be sure how it got there.

I have my suspicions...

It's no secret that the Obama administration has been very aggressive on maximizing agriculture exports. And I wouldn't put it past this slippery snake to look the other way as his puppet masters contaminate our soil in an effort to juice up our wheat supplies. By any means necessary, right?

Of course, if this is the case, the plan clearly backfired.

About 50% of the U.S. wheat crop is exported, and in Oregon, about 90% of all wheat is sent overseas.

South Korea and Japan are the first, though I expect there will be more, which is certainly going to severely impact this $8 billion wheat export business.

What a catastrophic mess.

As columnist Mike Adams recently pointed out, Monsanto is a ticking time bomb for U.S. agriculture:

This proves, without any question, that Monsanto’s genetic experiments which “escaped” into commercial wheat fields are now going to devastate U.S. wheat farmers. Expect the floor to drop out on wheat prices, and watch for a huge backlash against the USDA by U.S. farmers who stand to lose hundreds of millions of dollars on this.

As the USDA has now admitted, Monsanto’s GMO experiments from 1998 — 2005 were held in open wheat fields. The genetically engineered wheat escaped and found its way into commercial wheat fields in Oregon (and possibly 15 other states), causing self-replicating genetic pollution that now taints the entire U.S. wheat industry.

Of course, the USDA is looking into it. Which basically means nothing with happen, and no one will be forced to take responsibility for potentially gutting wheat exports and poisoning our food supply.

The USDA says its investigating the issue, but how do you think that's going to pan out?

After all, the USDA is pretty much run by Monsanto.

Hell, the entire United States government — from the White House to the State Department to the Supreme Court — is infected with Monsanto shills. 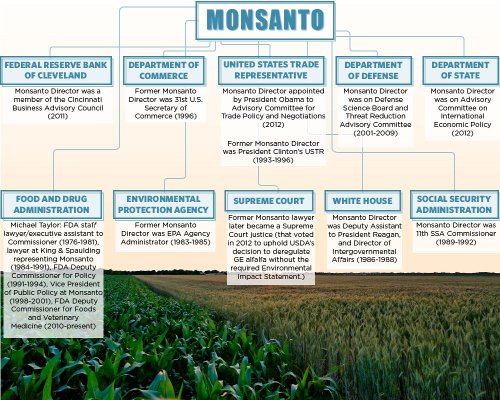 But make no mistake; the Obama administration has been the biggest whore for Monsanto yet.

Don't forget that just a couple of months ago, President Obama signed HR 933 into law and officially gave Monsanto the right to poison your food without ever having to fear legal action.

Hidden in the text of the Farmer Assurance Provision of HR 933, you can find a biotech rider that gives Monsanto the freedom to contaminate any farm in the United States without any type of legal accountability.

Heather Callaghan over at Activist Post spelled out the whole evil agenda perfectly. In regards to what has been called "The Monsanto Protection Act," Callaghan writes:

The USDA already gives biotech companies like Monsanto the thumbs up, trusting Monsanto's own safety evaluations. Now the court system cannot intervene, which could prove detrimental to farmers who are sued by Monsanto for patent infringement when their GM seeds contaminate those farmers' fields.

As pointed out in a recent piece in the International Business Times, this sets a precedent that suggests court challenges are now a privilege, not a right.

I don't care which side of the aisle you call home — there is a very real and very dangerous connection between the Obama administration and Monsanto.

I'd even go as far to say that it is a treasonous one as it puts our health, our safety, and our economy at risk.

President Obama has kicked and screamed about coal-fired power plant pollution, but has turned a blind eye to the highly unethical and very serious pollution of our food supply.

As far as I'm concerned, this is a bigger scandal than Benghazi, and should be treated as such.