If it wasn't clear to you that Democrats are, by nature, obsessed with controlling everything around them, the events of the last several days in NYC should provide some perspective.

The situation involved a luxury apartment building, a small personal transportation device, a fire that left 38 in the hospital, and the ensuing slew of proposed laws that the NY City Council will be considering next week.

It all started this past Saturday, when smoke and flames were reported rising from the 20th-floor windows of an apartment building on East 52nd Street.

Known as the Rivercourt, this 292-unit structure was built in 1975, with one-bedroom units renting for about $5,000 a month.

The Fire Department of New York responded, eventually removing 38 from the smoke-saturated building, two of them in critical condition.

One woman was dramatically extracted from a window, as all other paths of egress were blocked by flames.

The culprit? A "micromobility" device with a failed lithium-ion battery.

Though the term is broad, a micromobility device that's able to fit inside an apartment is likely to be a hoverboard or motorized scooter like the one pictured below. 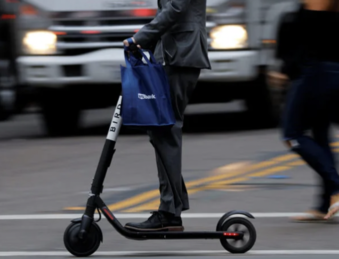 For the FDNY, this isn't a new problem. On average, New York firefighters respond to more than 200 lithium-ion-sparked fires annually.

How We Welcomed a Killer Into Our Homes

This was, however, one of the most noticeable, as it very nearly destroyed an iconic Midtown East building.

I originally wrote about this fire earlier in the week, but now the story has taken another turn.

By Tuesday night, a list of proposed regulations to combat this issue had been drafted, with a meeting set for decisions on whether to adopt them.

These new proposed laws include:

You can almost feel the leftist drool flowing freely as these proposed new plans are rattled off in a public forum.

But to me, this does underscore a problem. Lithium-ion batteries are unsafe.

Laws controlling their usage and even possession are not new. Airlines have had regulations in place for years either limiting or prohibiting the transportation of fully charged spare batteries. Fines for violating these rules are stiff, costing upward of $30,000 per violation — and understandably so.

A fire on the ground is one thing. At 40,000 feet, surrounded by fuel and oxygen, even a tiny lithium fire could turn tragic in seconds.

But if you think that new regulations will quell the problem, I'd think again. We're producing more batteries than ever today, and that rate is itself growing faster than ever and is projected to continue at least through the end of the decade.

Soon enough, a large percentage of the vehicles you see on the road will join the ranks of lithium-ion motivated devices.

And that in turn means that recycled, refurbished, and otherwise reused lithium cells will spread through the developing world like a tsunami, increasing the fire risk exponentially for unsuspecting consumers.

Here's the thing, though... I'll bet you that if you fast forward a decade or two, you're not going to see a world overwhelmed by lithium disasters large and small.

The lithium-ion market, which we've been told will be worth $200 billion a year by the beginning of the next decade, may, in fact, never even survive past the 2020s.

Laws Won't Deliver the Future... But This Could

The reason I'm saying this is that right now, lithium's successor is already on the production line...

A new battery with a new cathode and a completely new world in terms of performance and durability.

We're looking at a capacity increase of 2–3x, a life span increase of up to 5x, and a charge speed improvement of 70x.

Just imagine charging your electric car in less than two minutes, driving more than 1,000 miles between charges, and have that car outlast you on its way to an odometer reading of 1 million miles or more.

I'll make you another bet: If all that were available today, your next new car would run on electrons.

What I just described isn't here just yet, but the batteries that can make it all possible are already in production for smaller consumer products.

Soon enough, however, you will start to see these new batteries appearing in larger applications.

The company building these batteries did more than just create what could be the rechargeable power storage benchmark for the next half-century...

No Excavators, No Brine, No Cargo Ships

It also patented the method for manufacturing the cutting-edge material from which these cathodes are made.

There is no mining, no refinement, and no complex supply chain involving foreign suppliers. Everything is made in-house at the company's Brisbane production facility in northeastern Australia using only two raw materials: natural gas and electricity.

Now, here's the biggest shock of all: This company, as of this morning, had a market capitalization of less than $200 million.

That's less than 1/1,000th of the projected size of the annual lithium market at the turn of the next decade.

I'm convinced this is the biggest bargain anywhere on the public markets today.

I've been talking myself blue about this company for weeks now, and there's a lot more information to go over, so I've gone ahead and made it easy for all our Wealth Daily readers.

We recently published an informational video all about the company and the battery technology that could disrupt the world of lithium batteries in the coming two–three years.

Check it out here.