Long Live the Next Netflix

It’s an odd week for the U.S. stock market. Practically our whole country was closed for business yesterday. Many of us got to extend that midweek break into an extra-long weekend.

But that means it’s a very short week at an office that covers a realm that really never takes a break.

Of course, I’m talking about the world of finance. Sure, the U.S. markets were closed yesterday. But do you really think the world took the day off, too?

So even though we’re letting our support staff take a well-deserved holiday this weekend, we’re still committed to bringing you the best investments and latest news.

You’re used to reading my weekly commentary on Fridays. But you might not know that I write them a day early to make sure everyone else has time to do their part in publishing the articles.

This week, however, since Thursday was a U.S. holiday and our offices were closed (and still are today), I’m writing two days earlier than usual.

So I’m writing something on a Tuesday that you’re reading on a Friday. And in case you forgot, the market is constantly moving and news is constantly popping up.

Writing even a day in advance sometimes means you’ve got to make last-minute changes because the whims of the market shifted overnight.

So you can imagine how much planning has to go into something that needs to stay fresh for 72 hours when so much can change in just 12.

But after many hours of researching and debating different topics, I’ve finally got one that’s going to stay fresh.

And it’s also going to give you an opportunity to protect your cash and make some extra profit while you recover from BBQs and fireworks this weekend.

Last week, I wrote to you about Netflix and some of the challenges it’s facing.

Disney, Time Warner, and Comcast are all working on streaming services to compete with Netflix. And all of them have far more original content than Netflix.

So the company is on a race to build its stable of feature films and series. But it’s spending itself into oblivion in the process.

I covered some of the massive and growing expenses last week. But I wanted to throw in a chart I think really paints the picture best: 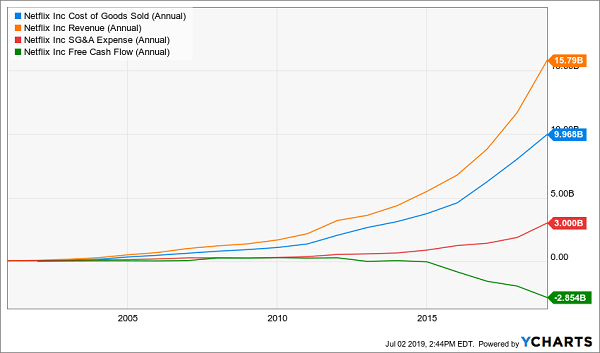 That’s not good. Less money is coming in than is going out. That means the extra has to be covered by debt. And you don’t have to be a genius or some kind of math whiz to know that’s not sustainable.

But that’s not even the biggest problem Netflix has going for it right now.

Slow Growth Leads to No Growth

You see, Netflix just isn’t growing that fast anymore. But if you only read the headlines, you’d think I’m crazy to say that...

I did a Google search for Netflix new user numbers, and the headlines were all about blockbuster quarters and the company adding more users than ever before.

But when you actually dig into the numbers, you can see that Netflix new user growth peaked back in 2014 and finally stalled in 2016.

Sure, the company is still growing new users, but not at the rate it did in the past. And as an investor, I’m a little worried when I see growth slow.

But what worries me even more about Netflix is that its share price has completely disconnected from its fundamentals.

The whole time new user growth has been stagnant, the share price has been screaming higher.

Now, after three years of lackluster growth, Netflix shares cost around $375. The price grew seven times over while the company converted fewer and fewer customers. 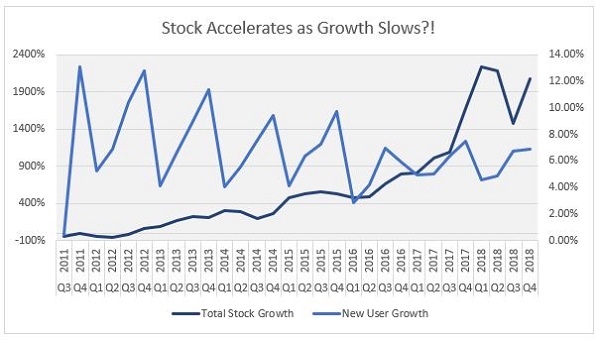 The craziest part of that chart for me is that shares really didn’t ramp up until after growth fell off.

But I’m not the only person taking notice of this. And as more analysts and investors note the discrepancy between price and fundamentals, you can bet Netflix will shed a lot of that premium valuation.

So where’s the opportunity?

Well, first off, if you’re a Netflix shareholder, you can sell your shares and take your profits off the table. Or you can just hedge your position with some covered calls. You’ll cushion any future loss with the premiums you get.

If you’re not a shareholder, you can play the downside by purchasing puts.

And you can certainly make some bets on the other companies bringing streaming video services to market: Disney, AT&T (owner of Time Warner), Comcast (owner of NBC, among other channels), Apple, Amazon, Google, Microsoft, et al.

But if you really want to make profits like the folks who invested in Netflix back in 2012 when it was growing fast but only cost $7 a share, then you need to stick around for what I’m about to share...

Netflix Is Dead, Long Live the Next Netflix

I’ll be honest, I don’t see video streaming having a clear winner after all this is over. I actually see it coming full circle and companies working to bundle services together.

But that’s getting really far ahead. What I’m really saying is that none of the new Netflix competitors are going to take the top spot. There isn’t going to be one.

And that means none of them are going to give you gains like the early Netflix shareholders got.

But I’ve zeroed in on a small cutting-edge technology startup that’s still flying under the radar — even though it recently scooped up the Netflix executive responsible for that company’s rocket ship-like ascent.

Even though this company is way younger than Netflix and already has far more customers.

Even though this company is completely dominating every single market it enters.

It’s so impressive that my partner and I have taken to calling it “the Next Netflix.” Not because it’s going to take over the video streaming market...

But because it’s going to make early investors the kind of gains Netflix’s early investors got. And the next opportunity for a massive run is coming in just a few weeks.

On July 26, the company is scheduled to make an announcement that’s going to rock the stock market. And it’s got the potential to deliver you a 1,000% gain when it does. Maybe even more.

You see, this company is cornering a $6.2 TRILLION market as I type. It’s growing ridiculously fast, too. Last year it doubled the number of customers it can claim as its own.

And this year it’s projected to do the same. But I got my hands on some information that shows that milestone is actually coming a lot sooner than the end of the year.

It’s going to be announced on July 26. And it’s going to send the stock soaring when the news breaks.

That’s why I’m telling you about it now. I don’t want you trying to get in on the mania after the rally starts. You’ll miss out on the biggest gains.

So my partner and I put together a report detailing this opportunity so you can get in before the information gets out.

There’s Not Much Time Left

Just click here and you’ll have everything you need to set yourself up for Netflix-like profits.

Remember, that 1,000% this announcement could bring is peanuts to the 34,445% profit Netflix turned for early investors.

And it’s likely just the start of the profits you’ll make off this up-and-comer that Forbes says is on an “unstoppable rise” and Business Insider says is “poised for explosive growth.”

The catch is that you have to act quickly. It’s already July 5 today. That’s only three weeks until payday. But it’s only 15 trading days. And we all know how fast those will roll past.

So do yourself a favor and take a little time today to get yourself set up to be one of the newly minted millionaires the Next Netflix will start creating come July 26.

Click here now and get started before it’s too late and all the profits are in someone else’s account.