Negative Emissions: The Next Big Profit Ground for Green Tech

It goes without saying that climate change is a politically charged topic these days, a fact that’s become especially apparent as of late, as the U.S. quarrels over the Democratic Party’s recently revealed “Green New Deal.”

No doubt radicals on both sides of the aisle have contributed to a polarized atmosphere around this issue for years, and the tension surrounding climate change has now thickened to the point that you could cut it with a knife.

On one end, you have doomsayers painting an apocalyptic picture of our future. Climate alarmists envision a Day After Tomorrow-type scenario that calls for the abolishment of fossil fuels within 10 years. If we don’t follow their lead, they say, hundreds of millions will die.

On the other end, you have outright deniers and conspiracy theorists who continue to bury their heads in the sand. These are the individuals who would have you believe climate change is a total hoax, manufactured by China and the liberal elite.

Those of us living in reality, of course, understand that neither of these radical positions represents the truth. As is usually the case, the truth lives somewhere in between.

Now, if you’re expecting me to reveal the whole truth on climate change here and now, I assure you, you’ll be sorely disappointed. It’s not my intention to get deep into the weeds on this topic because, quite frankly, it’s a waste of our time and out of my scope.

I will, however, lay out a few basic facts, because climate change is an undeniable profit opportunity for investors. We’ve already seen the rush of money into wind and solar, and now we’re about to see it rushing somewhere else. Armed with the right insight, you’ll know where to look next.

To start, we know climate change is happening. Contrary to popular belief, there is no scientific consensus on exactly to what degree humans are causing these changes, but there is indeed a consensus that we contribute.

We know for a fact that CO2 emissions trap heat in the atmosphere and also that humans are producing CO2. This is a fact only flat Earthers and their kin could deny.

We also know that the level of CO2 in our atmosphere has been rising alongside global temperatures for the greater half of the last century: 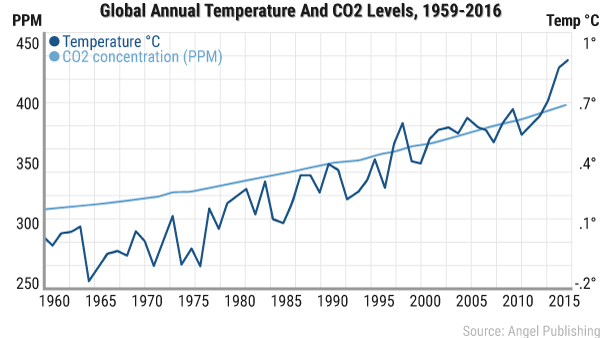 In fact, average CO2 concentration in the atmosphere recently surpassed 411 parts per million, the highest in recorded history.

All the while, sea levels are increasing at an accelerating pace, oceanic acidity is rising, and corals are bleaching toward extinction.

We can debate all day about to what degree humans are causing these changes, or to what extent the U.S. is or is not responsible, but those points are ultimately moot. What’s truly important is that we know for a fact that these changes are happening, and we know it’s because of CO2.

The question, of course, is what to do about it.

For decades, the conversation on climate change has surrounded the most intuitive solution: produce less CO2. Yet after decades of subsidizing clean energy sources, fossil fuels still dominate the energy landscape.

More importantly, after decades of ramming renewable energy down our own throats, atmospheric CO2 concentration is still breaking records in 2019.

You see, while renewable energy sources such as solar and wind are taking a greater piece of the pie, world energy consumption is accelerating so fast that the market share gains aren’t enough to reduce total CO2 output.

Every year, the global population of people and, perhaps more importantly, energy-sucking machines is rising. This has translated to increased demand for all forms of energy, fossil fuels included.

None of this, of course, is to suggest that alternative energy sources are useless in limiting global CO2 emissions (quite the contrary), but it is to suggest that they’re not enough to reach a point of reduction given the demands of the modern world.

Of course, we can wax poetic about a society where people are more energy conscious. We could even debate the potential merits (and horrors) of population control. But neither of these is a realistic, or moral, solution for reducing CO2 concentration in our atmosphere.

At the end of the day, there is only one way that we can accomplish CO2 reduction at a meaningful scale, and that’s through the actual physical removal of it.

Geoengineering, carbon capture, negative emissions — it doesn’t matter what you call it. We need to remove emissions from the atmosphere in order to reverse our current path.

As one University of Michigan scientist recently put it:

We have no option [but] to remove the CO2 we have already emitted.

This reality is so clear, in fact, that even U.S. politicians have come to an agreement on it.

Despite all the partisanship in modern American politics, an agreement was reached in 2018, when our congressional leaders passed the FUTURE Act (Furthering Carbon Capture, Utilization, Technology, Underground Storage, and Reduced Emissions Act).

This bipartisan legislation just doubled the tax credits available for carbon capture technology and sent the message loud and clear to business leaders that negative emissions is the future.

Of course, you won’t hear the mainstream media talking about any of this because compromise doesn’t garner clicks quite like conflict does, but understand there is a newly concerted effort to push this technology forward, just as there once was in the early stages of solar and wind energy.

Now, you might agree with these subsidies or you might not, but the fact of the matter is that the money is going somewhere.

Among those who will be reaping the benefits is a little-known, publicly traded power company out of Danbury, Connecticut. These guys have found a way to not only capture carbon but also generate power from it.

That, my friends, is a potential game changer, because it drastically reduces the cost of an otherwise expensive technology. It’s also likely why the company has already inked deals with ExxonMobil, Toyota, and others.

This company comes with risk, mind you, but the underlying reward is immense. For the full story on this high-flying stock, you can review the details here.