I love trading and investing in energy commodities.

When I was a young chap, a hoary old trader told me oil prices are easy to understand...

When prices are high, companies spend money to produce more product. This creates higher supply and drives down prices.

When prices are low, the fly-by-night firms run out of financing and go out of business. This creates a supply squeeze and drives up prices.

It has a knack of being a flat, boring market followed by a rip-roaring launch.

Check out this ten-year chart. Note the constant increase in volume:

You could have doubled your money twice in the last decade just buying and selling natural gas (NG) with a three-year horizon.

Obviously, if you had bought specific companies that were leveraged on the price of NG, you could have made ten times your money.

By now everyone has heard of horizontal fracking and the promise of a century's worth of newly-discovered natural gas. It's been the story of the past five years — and the reason the price of gas has fallen to record lows.

One British Thermal Unit (BTU) is equal to 6,000 cubic feet of natural gas, or one barrel of oil. All things being equal, NG should be worth $18, given that oil is currently priced at $90.

That said, it is easier to transport oil. And oil has historically traded at a 10:1 ratio. The current ratio is a severely discounted 30:1.

Either oil must drop in price or NG must go up...

NG will go up.

Here are five reasons why.

Demand is Up — and Rising

President Obama said he would kill off the coal industry. You may remember his quote from 2008: “If somebody wants to build a coal-powered plant, they can. It's just that it will bankrupt them.”

We all know the president is good at destroying things, and he is on his way to achieving his objective.

For the first time on record, power plants are consuming more natural gas than coal. Coal consumption is at a 30-year low.

New sources of demand include long-haul trucking and fleet vehicles like Waste Management and UPS. Waste Management, which runs garbage trucks that get 2 mpg, is seeing very real savings by converting to natural gas.

As you can see by this chart put out by the EIA, the trend is dropping. Granted, we remain well above the five-year range — but the trend shows we will fall back between the grey lines this autumn: 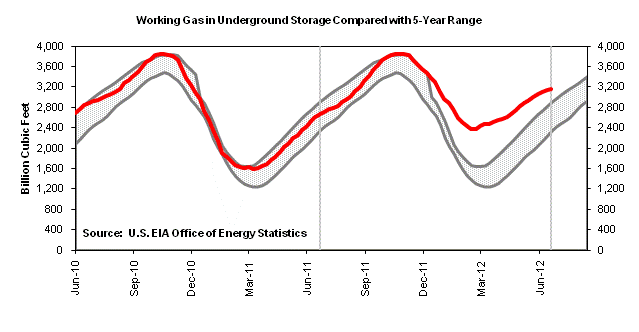 The weekly EIA natural gas storage numbers reported each Thursday came in with a 28 billion cubic feet (bcf) injection. The inventory increase last year at this time was 67 bcf while the five-year average accretion was 74 bcf.

So true that one week does not a trend make. But this makes eleven straight weeks that have experienced below average storage injections.

After Thursday’s numbers were released inventories stood at 3.163 trillion cubic feet, or 19.2% above last year — but only 17.5% above the five-year average.

A seemingly decent cushion until you consider as recently as May 10 stockpiles were 48.4% and 49.9% ahead of the previous year and the five year averages respectively.

Rig Count is Down

Three days ago, the rig count fell to the lowest levels since 1999.

The number of working rigs has fallen 45% over the past nine months and now stands at 518.

Estimates for what it takes to get natural gas out of the ground and to market are somewhere between $4 and $6 per thousand cubic feet.

This means the vast majority of producers are losing money.

No one goes to work to lose money. The industry will consolidate or go bankrupt.

Extracting natural gas from tightly packed shale deposits costs around $5-$6 per thousand cubic feet. At today's spot prices for natural gas, producers are losing money hand over fist. Many could cease to exist as the industry is forced to contract. And consolidate it will. There are so many firms that the top ten producers account for less than half the market between them.

It's starting to happen...

In yesterday's biggest energy news, the Chinese supermajor CNOOC just bought out Canadian natural gas and oil producer Nexen for a 60% premium! That puts its P/E at 27.85. (For comparison, ExxonMobil sports a P/E of 10; BP sports a value of 5.)

Look for more of these deals coming down the pike.

And last but not least, the demand for NG goes up when it gets cold.

Now, I'm not a weatherman, but it is unlikely we will have another year without winter as we did last year.

In my 17 years of experience trading stocks as a contrarian, I love buying assets that are out of favor once they start to percolate.

This keeps you from catching a falling knife, but puts you in low enough to get the vast majority of the upside.

As we've seen by the ten-year chart, when NG moves, it moves fast. It's time to average into some NG companies.