Mr. Market and the Three Bears

Investing is full of esoteric definitions explaining trends in the marketplace.

Today, I want to talk about a few of them, because there seems to be a LOT of confusion out there right now…

First off, let’s talk bear markets, since, you know, we’re in one and all.

There are two types of bear markets: secular and cyclical.

They represent long-term trends like the direction of interest rates or corporate earnings.

They’re long-term price declines that are punctuated by scattered rallies.

And there have only been four of them in U.S. history.

Cyclical bear markets are shorter-term and more related to the business cycle (as the name suggests).

They can last a few weeks to a few years and represent a negative turn in investor sentiment.

And unfortunately, it’s tough to tell exactly which kind we’re in right now.

Interest rates are one factor coming into play. Corporate earnings falling could be in the near future too.

So it could be secular.

I hope it’s not, because those last a long time and nobody wants to be stuck in one.

I hope it’s cyclical. And there are a few reasons it could be…

Mr. Market and the Three Bears

You see, there are three types of cyclical bear markets.

Event-driven bears are probably the freshest in most people’s minds because that’s what we got in 2020.

The global reaction to the spread of COVID-19 was the event. And it drove the market down over 20%.

The September 11, 2001, terrorist attacks on the United States caused one too.

Then we’ve got the standard cyclical bear markets, which are, as the name suggests, part of the natural cycles of industry and investment.

The Federal Reserve intervenes in the business cycle by raising rates whenever it sees necessary, thus controlling prices.

And then there are structural bear markets. Those occur when a bubble or some other economic imbalance corrects.

We’ve got a little bit of all those in here…

There’s one hell of an event going on in Eastern Europe. It could drag the world into another war.

The Federal Reserve most certainly is intervening in the business cycle in an attempt to control prices.

And after nearly 15 years of easy money policies, valuations on everything have gotten so high some have called it the “everything bubble.”

That’s all three bears right there, and none of them seem just right to me.

So now you know that there are a couple kinds of bear markets.

One is painful but relatively short-lived. The other is painful and drags on for years.

Brought to you by the experts at Wealth Daily:

Sign up for the Wealth Daily newsletter below to stay on top of the greatest value investment ideas... You'll also get our free report, Seven Techincal Analysis Tools for Investors.

And you know there are three types of cycles in that first kind of bear market.

That's with a recovery. But we’ve got to remember there are two kinds of recoveries we could have when a bear market ends...

A spike or a slog.

We’ve seen both in the recent past. And there are specific reasons that each kind of recovery takes hold.

Right now we could be in the midst of either.

I know: I’m not much help this week with my predictions, huh?

You see, when we get a spike recovery (or a V-shaped recovery), the market stays down for less than a year, does not retest its lows, and moves back up for one reason ONLY: a Fed pivot.

That means the Fed changes its monetary policy and gets more accommodative. It might even pump liquidity into the markets.

We saw that kind of bottom in the financial crisis of 2008 when the Fed slashed interest rates and started quantitative easing in the bond markets.

We saw another in 2020 when the Fed pumped liquidity into the markets after the COVID crash.

Maybe we’re seeing another one now. We’ll have to wait for next month’s meeting and rate hike to see.

But we could be in for a longer slog of a recovery.

That's when the market stays down for longer than a year and retests its lows at least once. These recoveries occur when sellers get exhausted and negative news doesn’t affect the markets anymore.

It happens when markets grow numb to the pain that’s front and center and start to focus on the future.

We saw that after the dot-com bubble burst and when the U.K. left the EU. 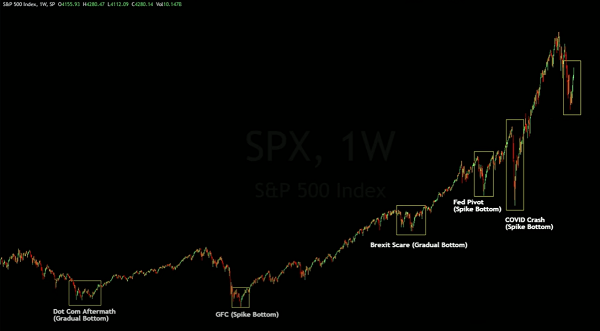 I’ve listened to the press conferences and read the minutes from the last Fed meeting.

And I didn’t hear or see anything to make me think the Fed is changing course in September.

I heard and read a lot about staying tough on inflation until they’re sure the effects of their policy are being felt.

And that says we’re going to get a much bigger interest rate increase next month than the market is anticipating.

The rally we’ve been on since July seems to be betting on a Fed pivot and a spike recovery.

But the Fed seems to think it’s going to stay hawkish for at least one more meeting and rate hike.

And if I’m right, then a lot of people who’ve been sucked into this most recent rally are poised to lose a lot of money in a very short time.

I won’t be one of them, however. Nor will hundreds of my readers.

And that’s because we’ve got a secret weapon that’s saved investors in every bear market it’s ever seen.

It’s something I picked up in my time on Wall Street.

Some of the guys I worked with there called it our “last resort,” because it was the only thing we could use to make sure our clients didn’t lose money when the market were crashing.

And when I left Morgan Stanley, it was one of the very first things I set about recreating to use for myself and my investors.

It’s kept my account flush with cash while everyone else’s profits went down the toilet.

And it’s taking all the guesswork out of picking a bottom in the markets.

That’s why I’m not too worried that I can’t tell what kind of bear market we’re in or what kind of recovery we’re going to have.

I don’t need to know, because this system will keep me in the safest stocks while the market drops and get me into the most profitable ones when the recovery really takes hold.

It’s why I’ve been able to take advantage of this recent rally even though I’m sure it’ll fizzle out at some point.

I’m not scared of when it will end, because my system will have me out long before that happens.

And with what I’m pretty sure is coming our way: a long, slow recovery where we test those June lows at least one more time…

I want as many people as possible to be able to take advantage of Wall Street’s "last resort."

I want you to be able to protect your capital AND set yourself up for the massive profits that come during both spikes and slow recoveries.

So I’ve attached a report that explains the strategy, shows how it’s beaten the market time and time again, and lets you in on how to use it to not just survive, but thrive in any market or economy.

All you’ve got to do is take a little time and give it a read and you’ll be ready for whatever’s coming our way, too.

I hope you’ll take advantage of it. But the final choice is yours.