Today's jobs report came out better than expected. The unemployment rate fell to 8.3% and nonfarm payrolls climbed 243,000. This was the largest upward move since April of last year and it put more than 100 points on the Dow today.

Gold sold off a bit this morning, but has been strong all week. 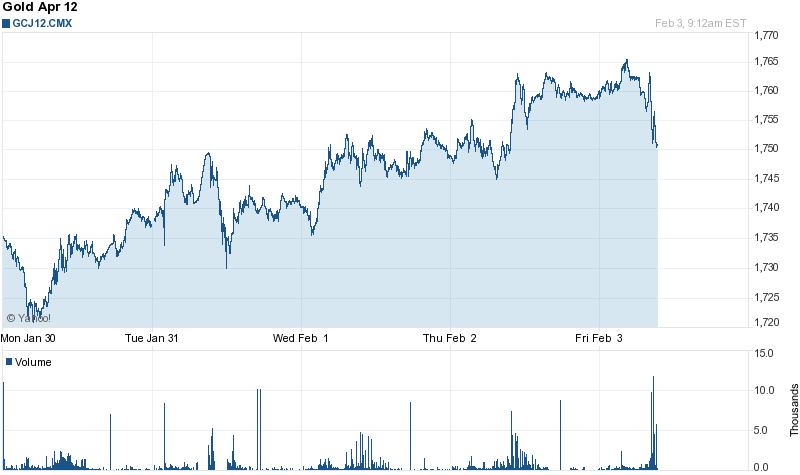 The price of gold is climbing because the Federal Reserve said it will keep interest rates at almost zero until late in 2014. Ben Bernanke, the head of the Fed, also said he was thinking about devaluing the dollar again by buying more debt. This is after he already bought $2.3 trillion in bonds.

You know, because two-point-three-trillion-dollars isn't quite enough.

Gold has climbed from below $1,600 an ounce to $1,750 an ounce in the last month. And this move came despite the fact that stocks have had their best-performing January since 1997.

It is obvious that the gold market thinks the Fed is out to destroy the dollar in order to prop up the big banks, which are still carrying massive amounts of housing debt.

In recent history the buying of gold coins has been restricted to nut-balls like me who have stocked food and planned a way to get out of Dodge. The truth is, most retail investors have never bought a gold coin or bar in their lives. But this is starting to change.

According to Business Insider:

A small minority of retail investors are beginning to diversify into gold in order to protect against systemic risk in the banking and financial sector (MF Global) and from the monetary risk of currency debasement. In Australia, the Perth Mint has reported very strong demand for gold and silver coins in recent weeks. The mint is a major supplier of coins to the UK and Europe.

Sales are up around 80% compared with the same months a year earlier, while silver coin sales have doubled. The mint’s largest markets for coin demand include Germany and the U.S.

Gold sales aren't restricted to Europe and North America. If you count the guesstimates on smuggling, the Chinese are by far the worlds largest buyers of gold.

This month, the Hong Kong Census and Statistics Department reported that China imported 102,779 kilograms of gold from Hong Kong in November, an increase from October’s 86,299 kilograms. Analysts believe China bought as much as 490 tons of gold in 2011, double the estimated 245 tons in 2010.

Four-hundred-and-ninety tons is the official estimate. My sources tell me that you could add 50% to that figure and you would still be undervaluing the real number.

The Chinese are great savers. They are buying gold because they see inflation moving up, the stock market falling down, and a housing bubble that has met a pin. With limited investment options, many Chinese are buying gold in the form of gold panda coins minted by the Peoples Republic of China.

And because of a special partnership, you can buy those coins, too. More information on that here.

Have a great weekend,