Electorate Zombies and Panic on the Other Side

George Romero's 1968 horror classic Night of the Living Dead is said to be a metaphor for suburban lifestyle... that is to say, consumerism.

The prized possession of Romero's zombies (and all the zombie movie sequels that follow) are brains. Once a healthy human gets infected (after his or her brain is eaten), the new zombie wanders around trying to eat the brains of other healthy humans.

It's no coincidence guns and gold are flying off store shelves today...

The zombie apocalypse is here.

But instead of the consumer, the zombies have taken the form of the American electorate.

Let me back up for a minute and talk about why guns and gold sales are suddenly hitting new records.

It starts with the election outcome.

Think about this: We had an incumbent president sitting on 8% unemployment, near record-high gasoline prices, rising national debt, 46.8 million Americans on food stamps (that's a record, by the way), and the president's own party hierarchy asking, "Does he even want to serve a second term?"

Historically, an incumbent president with that kind of record and mood would've been crushed at the polls. I would've taken that trade all day long. I probably still would.

The current situation is so bad, the Republicans should have been able to nominate a monkey and still win.

And therein lies the national schism. It's never been clearer. Obama won the electoral vote by a landslide, but the popular vote was much tighter: Obama won 52% of the vote, Romney received 47%.

Either Romney was a horrible candidate, or the electorate that voted for Obama didn't want any change.

In other words: They are happy with the current state of the economy.

Look at those numbers again: 61 million Americans voted for Obama. 46.8 million are on food stamps.

Why vote for somebody who said he was going to take away your government aid?

The divide between these two groups has never been greater. And that's why you're seeing almost outright panic on the other side...

Gun sales hit a record on Black Friday. So many Americans sought to buy a gun on that day, in fact, that the FBI's background check computer systems crashed — twice. According to news reports, booming sales were robust the following week as well.

Go to any reputable online gun store, and you'll see popular "home defense" weapons like the AR-15 and Remington 870 shotgun on backorder with delivery times ranging from three to six months.

Ammo is flying off of the shelves. My local Dick's Sporting Goods (not exactly the cheapest store for ammo) was completely sold out of 30-06 rounds and buckshot (mind you, I didn't see any holiday specials for this).

Not surprisingly, gun stocks have enjoyed the bull market. Ruger recently made an all-time record high: 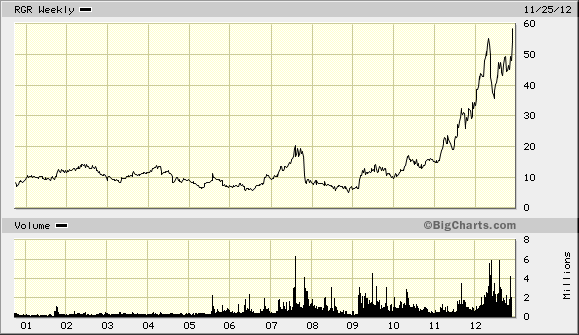 Ruger is up 500% in three years. In the technical world, we call a chart like this "hyperbolic."

Purchases of physical gold have hit all-time record highs since the presidential election. The blog ZeroHedge was one of the first to break the story:

What changed in the last 30 days? Did the world just wake up to the idea that the only way out of this quagmire is a twisted currency war that appears to have re-ignited thanks to Abe's efforts?

Something appears to have snapped in the American psyche as the last 30 days have seen the largest physical gold sales on record.

Between the search volume for "bulk ammo" and this, we fear something is afoot and while Congress fiddles as our economy burns, Bernanke going "back to work" is perhaps what the physical "hoarders" are thinking... or maybe they understand, as we noted here, that just as Kyle Bass has confirmed previously, Paper Gold is just like allocated, unambiguously owned physical bullion... until it's not. 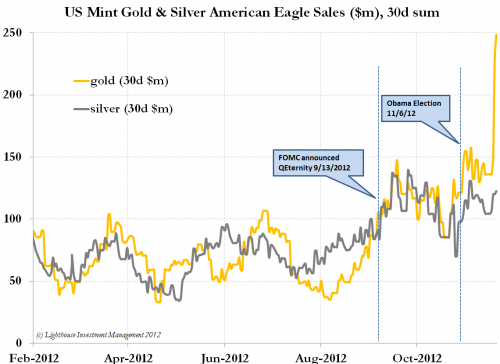 That chart, too, is hyperbolic.

There are two factors at work here...

1. The reelection of Obama promises to be inflationary.

Bernanke will stay on as Fed Chairman. And that means a continuation of quantitative easing (printing more money).

This will jack up the prices of all commodities — and the most for gold.

Gold is a super hedge against inflation, so watch gold move higher throughout Obama's second term.

The first factor is fairly straightforward, but the second is just now getting some attention.

We've told you in the past how the Federal Government has been considering changing if not outright confiscating your retirement accounts like IRAs and 401(k)s. They argue IRAs and 401(k)s are unfair to the poor, and that they don't work as originally intended.

However, policymakers are floating the idea of implementing a "national retirement plan" that all Americans must pay into.

Forget Social Security — this is something new...

A portion of your income would have to go into your national retirement account. You will be forced by law to invest in it.

What would you be investing in this national retirement account? U.S. Treasuries.

Dear reader, the chickens are coming home to roost. You will be funding the national debt... and it will be infinite.

One can imagine Charles Ponzi laughing.