Money to Burn: 10% of Cash Supply to be Destroyed

Your Tax Dollars at Work 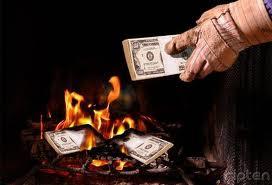 Here's a story that is sure to leave the gold bugs shaking their heads.

It seems as though Uncle Sam can't even print his own fiat currency without screwing it up.

A full 10% of all existing U.S. currency is going to be quarantined and burned at a cost of over $120 million.

“As a metaphor for our troubled economic and financial era -- and the government's stumbling response -- this one's hard to beat. You can't stimulate the economy via the money supply, after all, if you can't print the money correctly.

Because of a problem with the presses, the federal government has shut down production of its flashy new $100 bills, and has quarantined more than 1 billion of them -- more than 10 percent of all existing U.S. cash -- in a vault in Fort Worth, Texas, reports CNBC.

"There is something drastically wrong here," one source told CNBC. "The frustration level is off the charts."

Officials with the Treasury and the Federal Reserve had touted the new bills' sophisticated security features that were 10 years in the making, including a 3-D security strip and a color-shifting image of a bell, designed to foil counterfeiters. But it turns out the bills are so high-tech that the presses can't handle the printing job.

More than 1 billion unusable bills have been printed. Some of the bills creased during production, creating a blank space on the paper, one official told CNBC. Because correctly printed bills are mixed in with the flawed ones, even the ones printed to the correct design specs can't be used until they 're sorted. It would take an estimated 20 to 30 years to weed out the defective bills by hand, but a mechanized system is expected to get the job done in about a year.”

Just another botched job by that craker jack operation known as the U.S. Government.

Your tax dollars at work....

Jim Grant: "The Fed is out of its lane"