Smart Munitions Technology in the Infantry

There's one major news story in the political sphere that's got everyone's eyes glued to their screens these days: the unfolding debacle in the Crimean Peninsula.

I'm going to avoid putting such heavy-handed labels on this emerging conflict and look at the practical side of things instead.

But before I get started on the practical, I'd just like to say that I do not believe Russia and the U.S. are headed for war.

It is simply unthinkable to both the informed man on the street and the defense strategist alike that the world's two biggest (by far) nuclear powers would step into the ring together after nearly 70 years of posturing and bluffing.

Far more likely is a new era of proxy wars between these powers via their client states — something we referred to as the Cold War throughout most of the second half of the 20th century.

The Cold War — as scary as the term sounds, and as terrifying as some of the cultural icons it gave rise to are (anybody remember "duck and cover"?) — actually did one thing remarkably well, and that is stimulate the arms industry on both sides of the conflict.

If that is what we now have to look forward to given Russian President Vladimir Putin's recent aggressions, my advice to you is to find ways to leverage this unfortunate state of affairs to your favor... in short, to be practical.

Military tech is always a bull market, but never more so than in times like these.

And right now, the one development on the horizon that has me most excited is a technology that may prove to be the infantry's best friend.

We all know about smartphones, smart TVs, and more recently, smart watches.

Now, it is my pleasure to introduce you to... Smart ammunition.

During the Vietnam War, the Department of Defense calculated that it took, on average, close to 10,000 rounds of ammunition fired from the rifles and machine guns of infantry to kill a single enemy combatant.

That figure was elevated by the practice of "spray and pray" marksmanship, where soldiers blindly emptied their magazines into a general area, oftentimes never actually seeing their target, in hopes of winning the lottery with a fatal shot.

It was a tactic made possible by rapid-fire infantry rifles and machine guns, and for decades, it was the prevailing battlefield philosophy of all modern armies.

As military commanders like to put it, "He who throws the most lead wins."

Well, all that is now set to change with the development of the smart bullet.

Researchers from Sandia National Laboratories — a wholly owned subsidiary of Lockheed Martin Corporation (NYSE: LMT) — are designing a self-guided bullet capable of homing in on targets up to a mile away.

The Albuquerque-based security firm states that the technology will change the landscape of future warfare — especially in situations calling for precision attacks on single human targets.

Here is some basic information on how this technology is radically redefining the role and the mechanism of small-arms projectiles.

First and foremost, these tiny smart munitions actually improve their accuracy the longer they stay in flight — the exact opposite of their ballistic predecessors.

The reason for this is that while ballistic (traditional) projectiles achieve peak performance the instant they leave the muzzle, smart bullets are able to auto-correct their flight paths as many as 30 times per second, thus allowing for progressive refinement of trajectory over the entire journey.

The more refinements a smart bullet makes, the better the results at the end... And those results are pretty dramatic.

Thanks to variables such as wind, gravity, and even the spin of the Earth, a .308 caliber bullet fired from a commonly issued bolt-action rifle will, on average, deviate as much as 29 feet over the course of a one-mile (5,280-foot/1,760-yard) flight.

Snipers are taught to compensate for these variables and can cut that 29-foot deviation down to single feet, but regardless, a 1-mile kill-shot in battlefield conditions remains the stuff of legends.

Technology and Training Make for a Killer Combo

Only the best special forces snipers alive today can be expected to land such a shot — and only on the rarest of occasions. In practice, sniper teams typically set up far closer to their targets, rarely taking shots over 1,000 yards.

But even at 1,000 yards, the amount of calculation, steadiness, and sheer luck necessary to hit a human-sized target still borders on super-human. 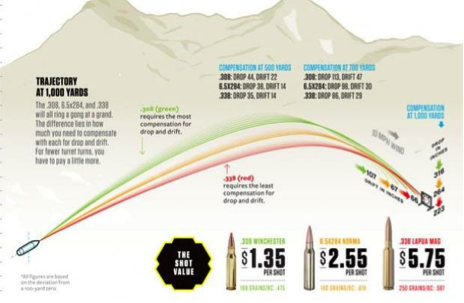 Smart ammunition can cut that 29-foot deviation down to just 8 inches — a 97% improvement in accuracy.

Not only does this advancement allow for longer shots and thus greater safety for sniper teams, but it will also give them the ability to kill more high-value targets at a cost far lower than the alternative — drone strikes or high-altitude precision munitions drops from manned aircraft.

The main physical difference between a ballistic projectile and a smart one involves the method of stabilization.

While ballistic ammunition uses spin imparted by a gun-barrel's rifling to stabilize the bullet's flight, much in the way a quarterback spirals a football, smart bullets are stabilized by fins, much like a dart.

These fins, in turn, are constantly in motion, guided by a tiny microprocessor to make tiny modifications throughout the smart bullet's flight. (Pictured below is an actual flight path of such a bullet, traced by an LED light at the back end of the projectile.)

The longer it flies, the more corrections it has time to make, and the closer to the bull's-eye it hits.

Which leads to another major difference: velocity.

Standard issue high-powered rifle cartridges propel ballistic projectiles at between 3,000 and 3,200 feet per second. Smart bullets are intentionally "slowed" to just 2,400 feet per second to allow for more corrections during a given flight path.

There are, however, two problems with slower-moving projectiles: diminished range and diminished stopping power.

To this, developers of smart ammunition have a potential solution: providing power to the bullet as it flies, i.e. supplying it with onboard fuel for the preservation of velocity against aerodynamic drag.

So instead of firing a solid chunk of lead sheathed in steel or copper, soldiers of the future will be firing 3–4-inch long mini rockets.

Combine this with modern laser target-designation, and the result is a smart missile in the hands of a common foot soldier.

Lockheed Martin is not the only company currently working on perfecting this technology.

Targeting computers, which will be used in unison with the smart munitions, are currently under development by the Cubic Corporation (NYSE: CUB).

The project, assigned by the DoD's Defense Advanced Research Projects Agency (DARPA) in 2012, will aid snipers using traditional ballistic technology but can also be integrated with smart munitions technology in the future.

Not Just a One-Trick Pony

Smart ammunition comes in more than one form, and extended range isn't the only design parameter.

Another offering in this technological field is the XM25 round — designed for engagements limited to 2,300 feet (just over half a mile).

Still not short-range by any measure. 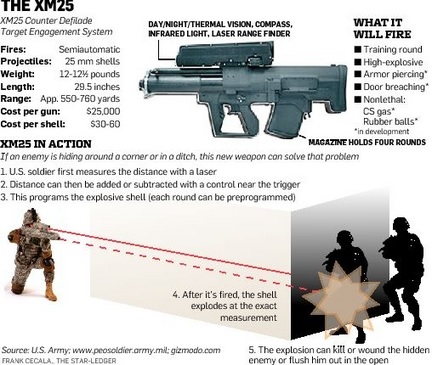 Designed more for brute force than precision, this 25mm explosive projectile can be programmed, in seconds, to explode over a given target when direct fire is impossible.

It measures distance by counting the number of rotations it makes (which remains a constant throughout its flight path), exploding directly above or beside a target as a kind of miniaturized guided grenade.

The XM25 has the distinction of having been used in combat, both in Iraq and in Afghanistan, and has proven to be 300% more effective than the unguided 40mm infantry rifle-launched grenades it was designed to replace.

Although funding for the XM25, which was jointly developed by Heckler & Koch and Alliant Techsystems Inc. (NYSE: ATK), was removed by the Pentagon last year, this proof-of-concept is a clear indication of where infantry small arms are going in the future.

See Through the Stigma

It's true that war profiteering is one of those things that leaves a bad taste in just about everyone's mouth, but let's remove emotion from this for just a moment.

Trends come in all shapes and sizes and, as an investor, it is your job to recognize and capitalize on them.

This trend, like most I write about, is easy to spot and impossible to stop, so the choice is yours...

You can either choose to abstain from profits for the sake principle, or you can accept that certain things are going a certain way, whether or not we want them to.

In this case, however, even your principles shouldn't stand in the way.

Smart ammunition will save the lives of our soldiers, as well as the lives of innocent bystanders who far too often get caught in the crossfire — a crossfire generally consisting of poorly aimed, rapidly fired chunks of lead that have changed little in design or function in the last 150 years.

The choice is simple. Make yours a smart one.