Mexico is The New China

This Boomtown is Kicking China's Dragon

The only thing most people know about Mexico is what they see when flipping channels past Univision.

But what they don't know can make you money.

Mexico is the biggest unreported story of the year.

Mexico is on fire. 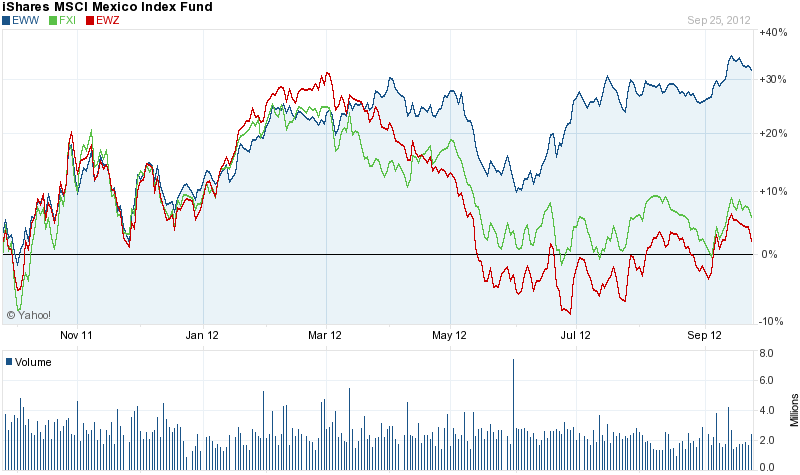 India and Russia are well off their highs as well.

Face it, BRIC is dead. But the stock market of our good neighbor to the south is making new highs.

In fact, the Mexican Bolsa IPC Index is just off its all-time highs of 41,600. It looks like the best-performing stock market of the last twenty years.

The U.S. is Mexico's biggest trade partner, with 80% of its exports. That might seem like a lot, but this is down from 87% just a few years ago as Mexico diversifies its economy.

Mexico is growing for a number of reasons...

First, it is close to the U.S. and in NAFTA.

There is no high fuel cost/time delay from Mexico: You place an order, you get in a few days. No muss, no fuss, and fewer pirated technologies. (It could take a month before you realize you got the wrong 50,000 widgets from China.)

Furthermore, there are no tariffs, fees, duties, or trade wars.

It's no wonder Mexico is now the fourth-largest automobile exporter in the world.

It's all about money.

China has its currency loosely pegged to the U.S. dollar. So, while Bernanke prints money and devalues the dollar, the yuan stays within a range. Up until 2010, the yuan was hard linked to the dollar.

That's why the following chart shows so many jumps and looks manipulated.

Because it is manipulated. By the state.

This means Americans pay 30% more for Chinese goods and 40% less for Mexican goods than they did five years ago.

(It's a good rule of thumb to flip these charts over in your mind to see the dollar gain. I used to just turn over the pink Financial Times, that's how old I am.)

So, over the past five years, the dollar is going down versus the Chinese currency, but it has gained versus the Mexican peso.

And it gets better for the China haters...

According to Boston Consulting Group, China's average manufacturing wages, when adjusted for productivity, are now higher than Mexico's.

They forecast that by 2015, the cost of a Chinese worker will be 25% higher than a Mexican worker. 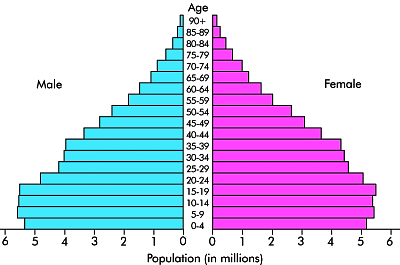 Mexico has one of the best population pyramids in the world.

This is what the U.S. looked like in the post-WWII boom years.

This is why companies are moving.

And get this: Unlike the U.S., Mexico has a budget!

This is a Richard Fisher speech from the Federal Reserve Bank of Dallas from February 2012:

On the fiscal front, it might surprise fiscal authorities in El Norte that Mexico actually has a federal budget! And it might surprise you to know that the U.S. government has not agreed on a budget for three years running.

As you know, $16 trillion is receding fast in the rearview mirror.

Bill Gross, manager of the world's biggest bond fund, is buying them up. According to Bloomberg:

Mexico’s lower debt levels and higher yields made investing in the nation’s bonds instead of German notes a decision so obvious to Gross that he ended his June comments on the Pimco Twitter account with the word “duh.”

Next time, I'll tell you about another Mexican secret: gold.