My Top Marijuana Picks for March

This was the image last week that got the Internet buzzing... 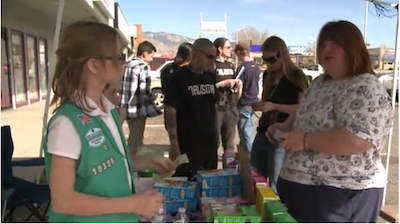 Two Girl Scouts from Albuquerque, New Mexico, set up shop outside a marijuana dispensary. A pretty smart move, if you ask me.

These young entrepreneurs sold more than 60 boxes of cookies to folks coming and going near the Ultra Health Medical Marijuana Dispensary.

Moreover, they struck a deal with the manager of the dispensary whereby they would receive an extra dollar for every box sold. How many other retailers do you know that can not only set up a retail location at no cost, but actually make money by gracing the owner of the location with their presence?

Unfortunately, the Girl Scouts of New Mexico weren't pleased. A spokeswoman for the organization said that selling cookies outside of medical marijuana dispensaries was against the rules. I don't know much about the Girl Scouts organization, but it seems to me that entrepreneurship and ingenuity should be applauded, not looked down upon.

Of course, if these girls are smart, they should ditch the whole Girl Scouts organization altogether. It's holding them back, and they can make a hell of a lot more money in the process. After all, it's not as if they get to keep any of that loot. And I'm sure the good folks over at the Girl Scouts organization, while frowning upon this particular sales technique, were happy to take that money.

Responding to the Marijuana Boom

Seems to me that these girls have a good thing going. And if they go into business for themselves, they could generate some serious revenue — revenue that could be re-invested in more lucrative investments that would pay off big time over the next 10 years or so.

By the time they're 18, they could have enough scratch to go to college without taking on any debt. Or they could simply stay in the cookie/marijuana business and hire their friends, who will be looking for unpaid internships and summer jobs.

While I am being a bit sarcastic here, I'm also being serious.

The truth is, there's an enormous amount of money to be made in the marijuana game. And this savvy pair of Girl Scouts is responding to the marijuana boom the same way some of the richest people on the planet are responding.

They're making a lot of money.

How Joe Made Millions

If you're a regular reader of these pages, you know I'm incredibly bullish on the legal marijuana market.

Truth is, I'm probably more bullish on legal marijuana than anything else I've ever written about in my decades-long history of market analysis. It's just easy money. There's no two ways about it.

In the last 100 years, I can only think of one other industry that offered this much opportunity. And that was the alcohol industry back in 1933, after Prohibition was repealed.

Joe Kennedy was likely the most successful alcohol investor as he started moving in on the industry before Prohibition ended. He saw the writing on the wall and knew it was inevitable that prohibition was going to end. So he started securing liquor-importing licenses and permits while few others even noticed what was going on.

Marijuana investors today can learn a valuable lesson from Joe. The time to invest in the end of prohibition is not when it happens, but before it happens.

Incidentally, the global alcoholic drinks market is expected to be valued at more than $1.4 trillion by 2020. That's trillion, with a “T.”

As you probably know, marijuana is about to become completely legal in Canada, thanks to the newly elected prime minister, Justin Trudeau.

Medical marijuana is already legal, but recreational marijuana is not. At least not yet, anyway. But by the end of this year, the rules for legalization will be written, and by 2017, they will be implemented.

This means that anyone who has a piece of this action today is going to make an absolute fortune when our neighbors to the north celebrate the end of prohibition.

Right now, the easiest way to take advantage of this massive and certainly once-in-a-lifetime opportunity is to own Canadian medical marijuana companies that have already inked deals with the government to grow and sell marijuana.

I've listed three of those companies, along with their ticker symbols, in my March edition of my “Legal Drug Dealers” white paper, which you can get access to here.

And if you're an accredited investor and you'd like to get in on some private legal marijuana deals, I invite you to become a member of my Green Chip Stocks service, where we regularly uncover legal marijuana deals that are only available to a select few. You can submit a membership application by clicking this link.