Real Estate: The Bargain of Your Lifetime

After 42 years of turkey, family squabbles, and Lions football, I decided to punt the Thanksgiving holiday and head to the beach with a dark-haired beauty.

So it was that I found myself in a beachfront hotel bar that saw its last remodel around the same time Marky Mark and the Funky Bunch last made the pop charts.

The afternoon fell away to a series of happy hour Yuenglings and spicy rubber tires the menu called jalapeño poppers.

The rotund bartender surprised me by saying that business was going great.

At the same time we were enjoying our stay, two church groups — Southern Baptists and Orthodox Jews — filled the conference rooms and buffet lines. It made for some interesting elevator rides and steady business.

Our publican told us the hotel was at 90% occupancy until after Christmas, at which point he was heading to St. Thomas to work for the rest of the winter.

There didn't seem to be a recession in his world...

As I was staring at the ocean through the frosted glass, vaguely watching the Wisconsin Beavers destroy Northwestern 70-23, a woman sat next to me and ordered a merlot. She was friendly with the barkeep and they got involved in a real estate conversion.

She emphatically pounded the bar with her fist, looked at me, and declared, “If you have the means, this is the best time to buy a house. You will never find oceanfront properties this cheap again in your lifetime.”

What she said didn't shock me, as I had just made an offer on a foreclosure that was selling at a 45% discount to its peers. And there were other rental properties that — if done right — would kick off a considerable amount of free cash flow... many to be had with zero money down.

Oh, I know value when I see it.

It wasn't that I disagreed with her that was shocking; it was that after three years of bad news and painful stories, there was at least one contrarian left who wanted to buy a house.

Anatomy of a housing bubble

The psychology of a housing bubble is much the same as other bubbles. And the case study for property bubbles is Japan.

Japan invented the 100-year mortgage, which fueled buying. At one point in 1990, real estate in Japan was so overvalued that one square block around the emperor's palace in Tokyo was worth more than all of California.

Here is a handy chart detailing the mass thinking that leads to bubbles. (The red shows U.S. thinking.) 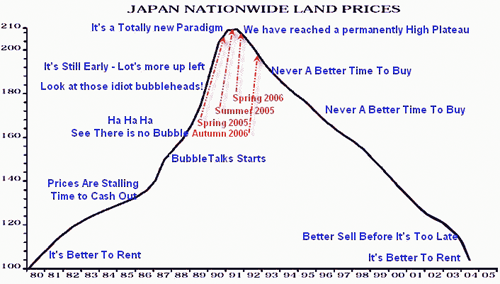 In other words, the bottom of the real estate market occurs when the majority of people believe it is better to rent than it is to own. This idea is starting to percolate through the United States.

Don't think so? Here's a roundup of recent headlines:

And as you can see from the chart below, after 2004, real estate in Japan has bounced. 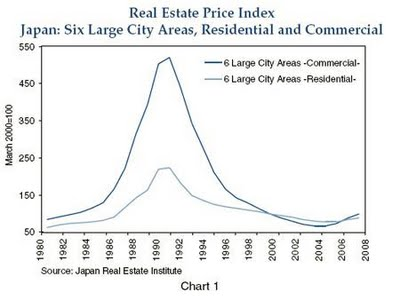 There is a whole host of reasons that the U.S. market is not the same as that of Japan: Japanese banks held onto, and hid, loans for 15 years. The over-valuation was much higher. And the demographics in Japan is different; the country doesn't have a large number of young people going out and buying houses.

But still, everything has a price — and Japanese real estate has clearly found buyers.

The United States is moving much faster to clear out dead loans. (Though painfully slow in my eyes, it is still much faster than any other country.)

Data through July 2010 released last month by Standard & Poor’s for its S&P/Case-Shiller Home Price Indices — the leading measure of U.S. home prices — show the annual growth rates in 16 of the 20 MSAs and the 10- and 20-City Composites slowed in July compared to June 2010. 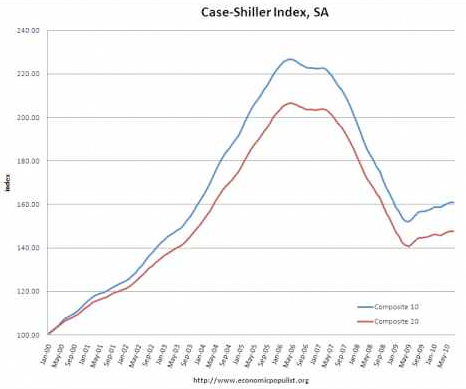 Clearly, the freefall in housing prices has ended. This is backed by a decline in bad loans. 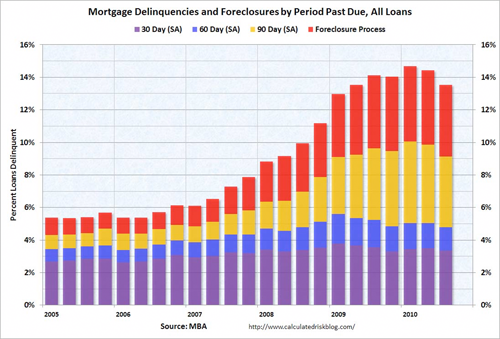 The MBA National Delinquency Survey said rates declined in the third quarter. The survey reported that the majority of the decline was due to banks being more aggressive in their foreclosure process, coupled with loan modifications.

From the press release:

But in my mind, the number one proof that housing has bottomed is that you can now make money from buying a rental unit.

That leaves you with 36k a year in income — plus someone else is paying your mortgage.

Say you put 20% down or $60,000. That gives you a 60% annual return with the addition of long-term upside as the condo appreciates.