There is a saying that goes something like: "One often meets his destiny on the road he takes to avoid it."

This quote has been attributed to a number of sources, including at least one cartoon character, but the truth behind it remains no less valid.

As a species, one of the roads we've collectively taken to avoid a certain, apparent destiny, has been the rechargeable battery.

Since the turn of the century, lithium-ion, or "Li," batteries have virtually taken over the world of consumer electronics — a sector that has itself expanded to rule over more and more of our waking moments.

This dependance didn't come without a price.

This past weekend, a group of 38 city dwellers in the country's biggest and most economically important metropolitan area became the latest to pay this price.

According to several articles covering the events, the NYC Fire Department started receiving calls about smoke and fire pouring from a building on East 52nd Street around 10:30 a.m. Saturday morning.

Known as "the Rivercourt," the 37-story building in Manhattan's Midtown East neighborhood was completed in 1975 and is home to 292 apartment units.

In all, 38 injuries were reported, with at least two people in critical condition.

4 Fires per Week, Every Week, in NYC Alone

The culprit? A micromobility device with a defective lithium-ion battery.

According to the Chief Fire Marshal Dan Flynn, this is the 200th lithium-ion battery fire in the city this year alone.

Now, to anybody who's been following me on Wealth Daily, you've already read copious volumes on the topic of lithium-ion failures.

It's a topic near and dear to all of us over at Angel Publishing.

Back in 2015, we had our own company hoverboard spontaneously combust in the middle of a workday as about 50 of us sat around our shared workspace, going about our business.

Below is a photo of what ours looked like after its fiery self-destruction. 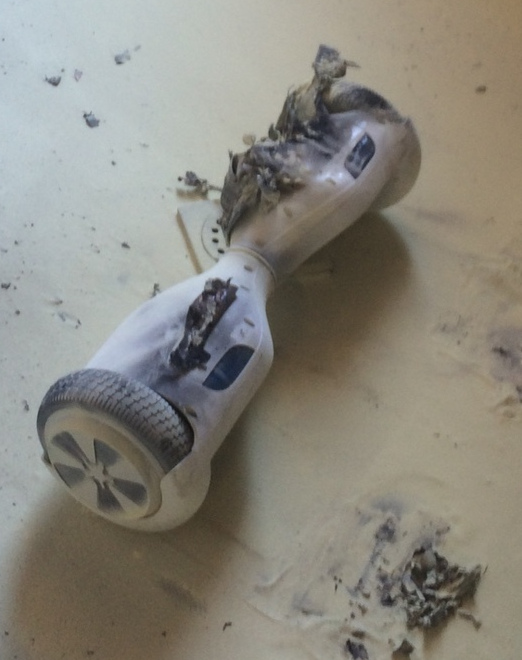 Nobody was hurt, thankfully, but you'd better believe that none of us view Li batteries as world-saving high-tech wonders.

But most of the world looks past all this.

Periodic failure sometimes leading to a fire is one of the shortcomings we've been taught to accept, one of the prices we've been told we would need to pay in order to usher in a new industrial era.

But is this price necessary? Is this an inevitable price of doing business, or is it a symptom of an imperfect technology, rushed through design and development to fill the vacuum of a rapidly expanding market?

Was Li the Best Solution, or Just the Quickest?

Well, to answer that question, let's look at some of the other famous features of today's global standard of rechargeable, distributed energy storage.

Li batteries take upward of an hour to fully charge, rarely last more than 500 charge/discharge cycles before exhibiting marked capacity drop-offs, and have proven to be woefully insufficient in terms of power storage.

While they may indeed be the main show in the early goings of the electron-driven era, they are, if put into historical context, the coal-driven locomotives of this latest industrial revolution.

While we enjoy our smartphones and electric vehicles, plenty of us are waiting for a highly anticipated evolution to this weak link.

As you read this, this much-awaited Li killer is arriving on the scene.

A high-tech materials company based in the northeastern Australian state of Queensland is currently producing the first units of a completely new battery system.

In This Case, the Middleman Is Chinese President Xi Jinping

There is no lithium involved, which also means no mining, no refining, and no dealing with the world heavyweight of all things lithium — the Chinese.

This company's cathodes are made of graphene, which can now be produced cheaply and efficiently, completely in-house, to exacting specifications, using a proprietary method requiring nothing more than natural gas and electricity.

The resulting batteries have between three and six times the service life, more than twice the capacity, and 70 times the charge speed.

You read that correctly. You could have charged your dead iPhone to 100% capacity in less time than it's taken you to read the first 600 words of this article.

These improvements will translate to EV charging that's actually quicker than pumping gas at the pump — which will single-handedly obliterate the most often-cited obstacle to adoption facing would-be EV buyers.

These batteries promise an order-of-magnitude improvement in reliability, and service lives so long that company management has quipped that "customers will be able to will them to their kids."

The Most Advanced Material of the 21st Century... Coming to Your Cellphone

All of this may sound like marketing copy, but the fact is these units are already being produced and shipped to potential corporate clients, who will test and verify the specs independently.

If all goes as expected, not only will Li slowly recede into the backdrop of this new industrial revolution, but Australia may well supplant China as the world champion of battery production.

The company that's driving all this should be a multibillion-dollar powerhouse, even at these early stages, but as of this morning, the company carried a market capitalization of less than $200 billion (USD).

Just for the sake of perspective, that's less than $1 for every $1,000 that the Li industry is projected to be earning, annually, by the end of the decade.

You don't need to be a high-level Wall Street analyst to see that this might just be the most undervalued stock currently trading anywhere on the Western public markets.

And you can buy it today, with just a few clicks on your E-Trade or TD Ameritrade account.

I've been pounding the table about this company for months now, and to be honest, I'm astounded at just how complacent the mainstream investing community has been in accepting this reality.

Maybe complacent isn't the right word. Maybe afraid is more like it, because when it comes to immensely disruptive technologies, mass adoption has always come with early-stage resistance just like this.

But the reality is... Li does need to go. Just like coal needed to be replaced by gasoline, so too does the first power source of the electron revolution need to be improved upon.

Graphene, unlike all the other candidates, gets rid of all of Li's problems, from technical shortcomings to the hugely problematic supply chain issues that come with having to deal with a hostile superpower like China.

There's more to the story, of course. More facts and figures that will leave you excited and maybe a bit worried, too.

I won't get into the rest of the details here, but I will leave you with this link to the video presentation our production team put together just for my readers.

It's fast and easy to understand, and by the time you're done you'll be an expert in your own right.

Click, watch, and forward this to anybody interested in energy and tech investing. It may well be the most valuable information you consume this year.