Is the Stock Market Rigged?

“An investment in knowledge always pays the best interest.”

A new bipartisan financial bill is making the rounds in Washington, D.C., this week.

The proposal would effectively ban sitting lawmakers and their immediate families from trading individual stocks.

A bill that would take away the ability of our leaders to profit from stocks in sectors that they control... What could go wrong?

Those in the know say it’s unlikely the bill will come up for a vote, but it puts renewed pressure on Congress, a reminder the American public is watching.

The pandemic accelerated shortcomings in the U.S. economy, one of them being that our lawmakers have profited from every single crisis and act like they've done nothing wrong.

But now there’s a renewed interest in holding insiders accountable for suspicious stock trades that occurred at the beginning of the coronavirus pandemic.

Take Federal Reserve Vice Chair Richard Clarida, for example. In February 2020, he sold a stock fund and then bought back into it right before the Fed announced safety-net programs to curb the economic fallout from the pandemic. After his trades surfaced last week, he stepped down, just weeks before he was set to retire at the end of January.

Or Republican Sens. Richard Burr and Kelly Loeffler, who sold stock just before the pandemic hit.

But many in Congress don’t see anything wrong with trading stock on non-public information. Speaker of the House Nancy Pelosi is outspoken against the new bill, telling reporters that “We’re in a free market economy. [Lawmakers] should be able to participate in that.” Just look at the millions of dollars they spent on stock trades last year... 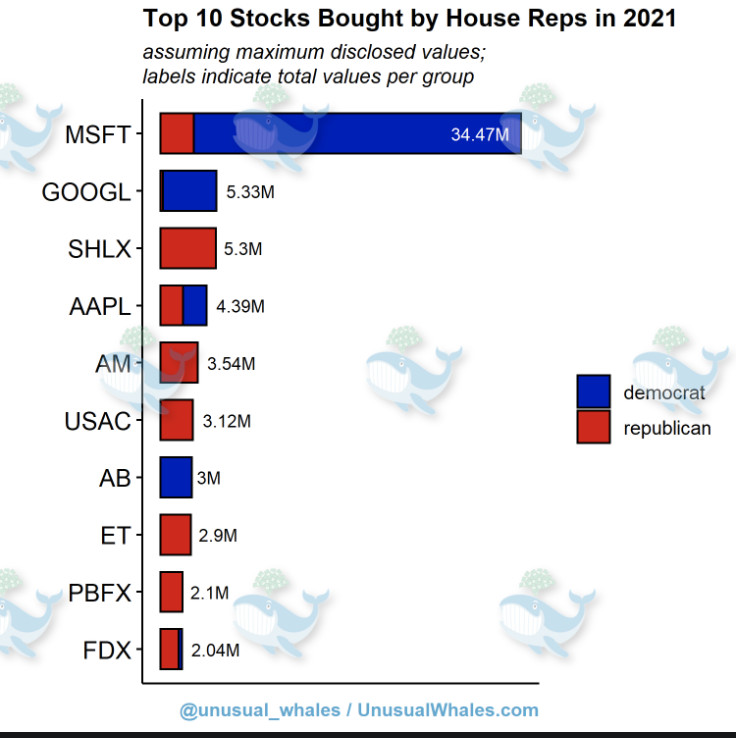 Sure, they should be able to participate, but they shouldn’t be able to influence stocks in sectors that they control. That's insider trading 101.

Steal From the Poor, Give to the Rich

For all the infighting and grandstanding on Capitol Hill, when members of Congress want to do something — especially if it involves their own money — they'll act fast and quietly.

You might be wondering why a new bill needs to be passed at all to curb illegal insider trading when President Obama already signed the Stop Trading on Congressional Knowledge (STOCK) Act in 2012.

Well, it’s because Congress has flat-out ignored the law but made it look they were taking it seriously.

All it took was an embarrassing 60 Minutes episode in 2012 to catch Congress off guard and light a fire under these corrupt lawmakers.

Journalist Steve Kroft opened the program by saying this about the motivation behind many who join the congressional ranks:

Few of them are doing it for the salary, and all of them will say they’re doing it to serve the public. But there are other benefits: power, prestige, and the opportunity to become a Washington insider, with access to information and connections that no one else has in an environment of privilege, where rules that govern the rest of the country don’t always apply to them.

Kroft also exposed the little-known practice of “political intelligence,” where former congressmen and staffers gather valuable nonpublic information from those working in the Capitol and sell it to hedge funds and traders on Wall Street.

But just one year after the bill’s passing, on the day of the Boston Marathon bombing, Congress discretely amended the bill to “delay until January 1, 2014, the date by which systems must be developed that enable public access to financial disclosure forms of covered individuals.” Meaning the president, vice president, members and candidates of Congress, and other presidentially nominated and Senate-confirmed officers gave themselves more time to hide the evidence.

According to an NPR investigation, the change took just 30 seconds and there was no debate. NPR congressional correspondent Tamara Keith wrote, "When the president signed a bill reversing big pieces of the law, the emailed announcement was one sentence long. There was no fanfare... when the Senate and then the House passed the bill in largely empty chambers using a fast-track procedure known as unanimous consent.”

So if you’re wondering whether the stock market is rigged, the answer is yes! Our so-called leaders in Washington will do anything to continue profiteering under the guise of making laws that help the average U.S. citizen. It's good to see that some members on both sides of the aisle are in favor of reining in congressional trading.

Trading on the Inside

If you know where to look, you can use these insider trades to your advantage.

Fortunately, the internet has made congressional and corporate insider trades readily accessible. The only problem is sifting through the boring forms and cross-referencing them to find tradeable patterns.

In the next few weeks, I’ll be bringing you an exclusive opportunity to follow me as I comb through the thousands of insider trades posted every day from corporate insiders, politicians, and large financial institutions. I’ve found this strategy to be extremely profitable while giving me the confidence and peace of mind needed when pulling the trigger in such a volatile market.

In the meantime, our senior biotech analyst Keith Kohl is going all-in this year on biotech, a sector rife with opportunities from this COVID mess. But it’s nearly impossible for the average investor to know what’s going on behind the scenes at these drug companies.

That’s why Keith’s partnered with biotech doctors and scientists on the inside who focus on the approval of all the niche drugs being tested right now. Keith has been known to tell his readers with pinpoint accuracy when the next biotech stock will take off.

These trades often happen fast. He’s already banked his readers gains of 3,278% on Aquinox in one day and 668% on Amarin in less than a month!

And he’s just released a new play that could go even higher.

Go here to get the inside scoop on the next biotech stock about to go gangbusters.

P.S. At the end of November, I recommended Activision (NASDAQ: ATVI) when it was trading around $60. It’s since skyrocketed 42% in one month on news that Microsoft (NASDAQ: MSFT) is buying the company for $68.7 billion cash. Write to me here and let me know if you got in on the trade.