It seems like I can’t go a day without hearing about Tesla (NASDAQ: TSLA) or what’s going on with its CEO, Elon Musk. There are so many headlines about Musk that it’s hard not to be intrigued by the guy and his company. The latest news headlines have been about Musk joining Twitter’s board and rumors of him wanting to acquire the social media company.

However, there’s some other news that’s been lurking in the background that involves Tesla and the company’s future within the electric vehicle and battery industries. In a recent tweet, Elon Musk expressed that Tesla could get into the lithium business.

Price of lithium has gone to insane levels... There is no shortage of the element itself, as lithium is almost everywhere on the Earth, but the pace of extraction/refinement is slow.

That was in response to a tweet from the account “World of Statistics” that was displaying the average price of lithium per tonne in the last two decades and more specifically the massive price increase since 2021. Benchmark lithium prices are near $78,000 per metric ton — an 80% increase.

A couple of weeks ago, I wrote about how the demand for lithium will only increase in the years to come. You can read what I wrote here. With that in mind, it makes sense for Tesla’s CEO to be concerned about lithium supply and even interested in playing a bigger role within the lithium supply chain. Tesla manufactures electric vehicles and will require lithium to continue manufacturing batteries for its EVs. And Musk is insinuating this might be the time that the company steps in. 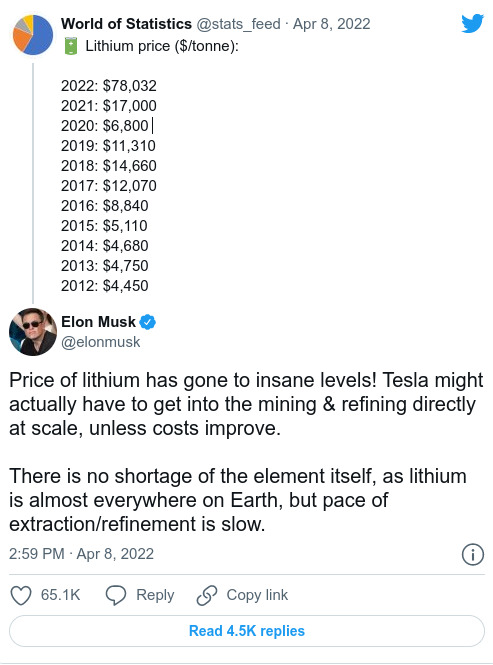 Elon Musk knows this situation best. His company manufactures EVs and those EVs depend on lithium for their batteries. It’s becoming increasingly more difficult to depend on lithium supplies, and some automakers are realizing that they might not be able to meet the goal of getting people into their brand-new electric vehicles as quickly as they would like to. Stuart Crow, chair of Lake Resources, a lithium exploration company, said:

Right now China owns basically 70–80% of the entire supply chain for electric vehicles and lithium-ion batteries, and therefore energy storage. The West has been remarkably slow to adopt a strategy to try and assist and secure a supply chain.

Musk doesn’t want to wait around for lithium supplies or compete against other automakers for those supplies, which could be one of the biggest reasons he’s been considering getting Tesla into the mining business. Not to mention the leverage he could have on other automotive companies that have been designing and manufacturing their own electric vehicles and will need lithium batteries for those vehicles.

There’s a lot of skepticism about whether lithium miners will even be able to produce enough lithium to meet the new demand that will occur over the next decade as the big push for EVs becomes even bigger. It seems like the lithium supply is in a little bit of a dilemma, and a lot of companies are depending on the supply to be abundant.

So I don’t really blame Musk for thinking ahead and wanting to secure his supply of lithium before it’s too late and he has to push back production goals. While I don’t know how serious Musk is about his plans for bringing Tesla into the realm of mining and refining, there is a valid point to all of this — there has to be another way to increase lithium supply and maybe even bring it to North America to lessen the dependency on China’s supplies.

And now that I think about it, there is an alternative way to secure a steady supply of lithium without having to mine it or rely on other foreign adversaries. It’s 100% emission-free and wastes no water, and the production process that’s involved uses a combination of safe, nontoxic liquid chemicals inside a lab. This process could be a lot cheaper than what it costs for traditional lithium mining.

Are you intrigued yet? Keep reading here for even more incredible details about this lithium production process and the company that has already pulled in $985 million worth of deals with some of the largest automakers and battery manufacturers in the world.

And if you enjoyed what I talked about today, then I know you’re going to really enjoy what my colleague Alexander Boulden is up to. Alexander has taken on the task of exposing America’s elite.

He has spent years rigorously testing and perfecting his trading system that tracks what America’s elite are up to. This trading system gives you the chance to level the playing field and take back control of your financial destiny. Sign up today to be a part of Alexander’s Insider Stakeout and start beating the insiders at their own game.