Is it Time to Buy Twitter Inc. (NYSE: TWTR)?

Way back in 2013, I made the case to Wealth Daily readers that social media company Facebook, Inc. (NASDAQ: FB) was being severely undervalued by the market and that the company’s revenue was about to explode due to inevitable growth in video and mobile advertising.

It’s crazy to look back at Facebook today and wonder how anyone missed this call in hindsight. Sentiment on the stock was surprisingly awful back then, but now, just a few years later, Facebook is considered a staple and bellwether of the technology industry. Second only to Google, Facebook pulls in roughly 22% of U.S. digital ad revenue share each year.

Today, the company trades for roughly $195. At $25, it was obviously a bargain at the time, but you either boarded that train already or you didn’t. The reality for today’s shareholders is that Facebook’s revenue growth is sinking and the stock uptrend is sputtering out.

On top of cooling growth, Facebook is also under fire for a growing list of controversies. It’s facing antitrust investigations and political pressure from both sides of the aisle, not to mention broader user fatigue.

Many people have become flat-out tired of watching their friends and family argue about politics and participating in the fray. Facebook users have a nasty taste in their mouth because it causes bad blood, resentment, and a host of other social concerns. Most people don’t want their names attached to all that drama, so they disengage unless it’s wedding photos or new baby pics.

Once the epicenter of online political warfare, Facebook is losing ground on this front to competing social media platforms, namely Twitter, Inc. (NYSE: TWTR), which has become a hotbed of opposing partisanship in the wake of Trump’s presidential election campaign and subsequent victory.

A few years ago, it wasn’t entirely clear whether Twitter would have the wherewithal to continue existing as a publicly traded entity. The company was consistently operating at a loss and went without posting a quarterly profit for almost five years. Yet suddenly, Twitter is starting to blow it out of the water. The company has posted a profit for eight consecutive quarters.

This Twitter cheerleading might seem poorly timed, considering the recent sell-off in the company’s stock. Twitter lost about 20% of its valuation earlier this month after posting underwhelming third quarter revenue (9% year-over-year growth to $823.7 million) and guiding low for fourth...

But successful investing isn’t about following the herd; it’s about knowing where the herd is going next.

Wall Street seems to have greatly overlooked the fact that Twitter's monetizable daily-active-user (DAU) growth was 17% year over year for the period. Notably, this was the company’s strongest user growth period in years. 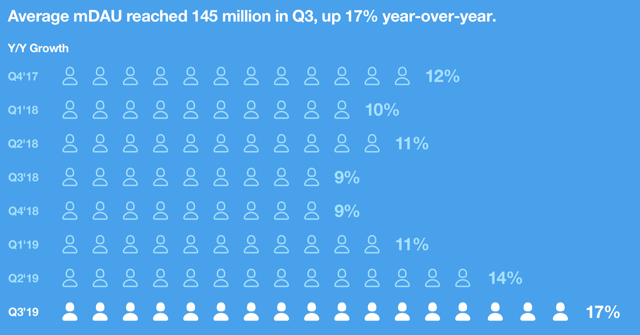 Twitter’s DAU base hasn’t just been growing, either; it’s been accelerating. DAU growth rate has increased every quarter this year so far.

So what exactly is going on? We’ll, there’s no way to say for sure, but my guess is that people have begun to realize that Facebook isn’t the best place for them to participate in the political debate anymore.

Where Twitter allows for anonymous hot takes and direct contact with celebrities and politicians, Facebook stifles what you may want to say by attaching your profile to your name and face. “Cancel culture” and mob mentality are real, and users are increasingly valuing their anonymity because of it.

To be perfectly clear, Twitter isn’t for everyone, but for the news-obsessed and the political junkies of the world, it’s becoming the place to be. Where else can you tell your least-favorite politicians to shove it? Where else can you be the media, as opposed to simply consuming it?

What I think we’re seeing right now is a bit of social media reshuffling, not only from Facebook but from other communities as well. In June, social media website Reddit slapped pro-Trump community “The_Donald” with a site-wide quarantine. Coincidentally, Twitter seems to be experiencing a surge in conservative, right-leaning activity.

Twitter has long been criticized by the right side of the aisle as being left-leaning and biased towards conservatives. There’s some natural merit there given the political makeup of Twitters employees, but that bias seems less evident today than it was a few years ago.

Interestingly enough, Twitter CEO Jack Dorsey met with President Trump back in April to discuss the state of social media. Political pressure from Republicans could very well be keeping Twitter’s censorship tactics at a minimum.

That, of course, may come off as a weird thing to say, considering that Dorsey announced this week that Twitter is banning political advertisements on its platform, but this is a blanket ban. Dorsey is effectively stepping back and letting Twitter’s users speak for themselves.

Why exactly does this matter to investors? Well, to start, it means the company is becoming less of an echo chamber and more of a neutral, organic space for both sides. It also limits Twitter’s risk to the kind of regulatory pressure Facebook is facing right now.

Wall Street sold Twitter after its earnings report, then sold some more when the company announced it was banning political advertising. The company is roughly 33% cheaper today than it was in September, yet its user base is growing and is more engaged than ever.

Twitter has been on the market for years, and I’ve never been a fan of the stock until now. This looks like a buying opportunity, plain and simple.