Is Gold Losing its Luster?

Maybe, But That's No Reason Not to Buy

Gold prices have generally traded horizontal in the $1,320 to $1,350 per ounce range since Brexit. And now, many are beginning to question the yellow metal's upside from here. 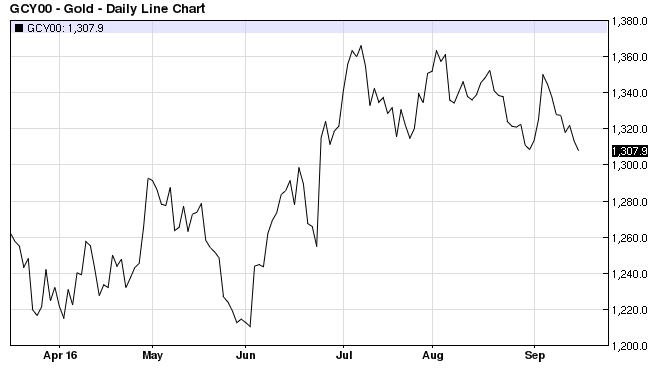 Even the most bullish on gold and precious metals have pulled back their predictions. Most recently, Nouriel Roubini (a.k.a. Dr. Doom) spoke in New York, noting, “Significant upside to gold is less likely than last year.”

However, there are some very good explanations for the horizontal trading pattern over the past several weeks. First, we need to consider profit-taking following Brexit...

The price of gold had its best quarterly increase in 30 years during 1Q 2016. Then Brexit pushed gold prices over $1,300 an ounce for the first time since 2014. There was no doubt a lot of profit-taking, especially leading into the end of Q2, when fund managers were securing profits to meet quota for the first half of the year.

August is generally slow for the gold and mining industries, and there was no monthly FOMC meeting. So there should have been no big expectations for gold prices following the end of Q2 anyway. But to add to this, the Federal Reserve has been making hints of an interest rate hike at the upcoming FOMC meeting next week.

Nevertheless, several Fed members have also consistently stated they will be making their decision based on data, which is not looking so good.

The August jobs numbers failed to impress a few weeks ago. Now, the Commerce Department says U.S. retail sales and factory output were both down 0.4% in August and cut their third-quarter estimate for growth.

This kind of data really puts the Fed in no position to hike rates. Doing so would immediately create backlash, as Fed members have continued to push data-driven monetary guidance. So it's extremely unlikely the Fed will move rates next weeks. And this puts gold in a stellar position right now.

I believe gold's generally horizontal trading pattern will snap following next week's FOMC meeting, and the price of the yellow metal will continue a march higher to $1,400 an ounce by Halloween.

The Federal Reserve is getting pulled deeper into the currency wars waging among Asian countries. It can't allow the U.S. dollar to appreciate very much from here. And several key members have stated on numerous occasions over the past several months that inflation is below their target rate. So I don't think there's anything stopping the Fed from keeping its monetary policies loose for the time being.

With that in mind, I'm strongly urging investors to own physical gold bullion as well as equities right now. Major gold producers like Barrick Gold (NYSE: ABX) and GoldCorp (NYSE: GG) look to be in great positions. I like the upside to the slightly smaller companies, like Newmont Mining (NYSE: NEM) and Yamana Gold (NYSE: AUY), right at the moment.

I think the best gold equities for anyone with no gold exposure at all are actually the royalty and streaming companies like Royal Gold (NASDAQ: RGLD) and Franco-Nevada (NYSE: FNV). These companies provide diversified exposure to the revenues of gold mining and eliminate much of the risk associated with actually mining.

Nevertheless, I maintain that the absolute most profitable way to leverage rising gold prices is junior mining and exploration stocks. High-quality junior gold stocks were the top performers during the run-up in precious metal prices in 2011. I expect them to perform similarly as gold prices march higher.

So while gold may be losing some of its luster due to generally horizontal trading over the past few weeks, I am still quite bullish — especially from here. There's little chance the Fed will move rates next week, despite its hints.

I expect to see gold prices immediately jump next Wednesday following the announcement to hold the overnight rate. And after that, I see gold continuing higher. So I strongly urge you to buy gold and gold stocks now.