Is Coronavirus LESS Deadly than the Flu?

I’ve been screaming from the rooftops over the past several weeks, warning that our reactionary approach to the novel coronavirus (COVID-19) outbreak was going to end up doing far more harm than good.

While nearly the entire world has been unified in terror over the big bad pandemic for the last few weeks, I was one of the lone voices in the media willing to break rank and question the doomsday scenarios and mortality rates that were being treated as gospel.

On March 14, I wrote the following:

...those who dismiss the economic impact of us all cowering in solitude are missing a whole lot of nuance. It’s not callous or cold to want to keep the economy booming because, at the end of the day, everyone needs to put food on the table and a roof over their heads to survive.

No doubt, our medical system needs to be prepared for the continued (and likely accelerated) proliferation of COVID-19. At the same time, the rest of the world would be wise to carry on as usual, with some extra hand washing in between.

If the media continues to milk this, though (as I expect it will) panic will only continue to spread, and people will react accordingly. Schools and businesses will shut down in increasing numbers, the economy will slow, and people will suffer in far greater numbers than is ultimately necessary.

Putting strict and widespread quarantine measures in place, although well-intentioned, may very well end up doing more harm than good in the long run. I believe I said this last week, but everyone needs to put food on the table and a roof over their heads to survive.

You’re probably not seeing this discussed very much in the media, but I expect that will change once the world feels the brunt of a recession and Americans are hurting.

This is an ugly situation with no good answers, but I don’t see a suppression or mitigation strategy remaining in public favor for too long. That said, I think the market will continue to face pressure until the sentiment flips. Either that or in 18 months when we have a working vaccine.

Needless to say, I was ahead of the curve on the bulk of this thing. 3.28 million Americans filed for unemployment benefits last week, marking a new record and one of the craziest economic anomalies the world has ever seen. 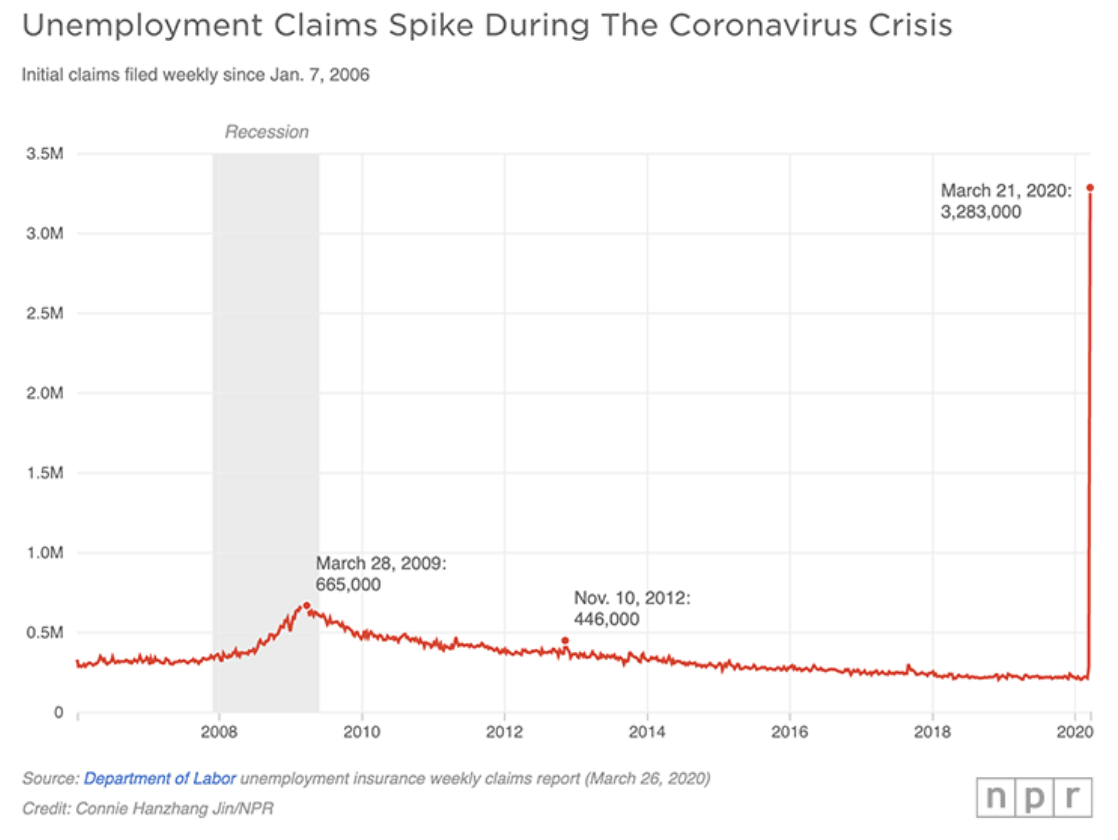 Late last week, President Trump began signalling that the White House was looking to dial back restrictions in an effort to get the economy rolling again. This was the booming tweet that would mark the shift in sentiment:

In the week that followed, the world would finally begin questioning the draconian and economically disastrous measures we have been taking in an effort to curb the spread of COVID-19.

There’s a lot of new information out there, but I want to specifically highlight this article from the Wall Street Journal, in which two Stanford Professors, Eran Bendavid and Jay Bhattacharya, argue that the mortality rates of the virus being disseminated throughout the media could be grossly inaccurate:

"If it’s true that the novel coronavirus would kill millions without shelter-in-place orders and quarantines, then the extraordinary measures being carried out in cities and states around the country are surely justified. But there’s little evidence to confirm that premise—and projections of the death toll could plausibly be orders of magnitude too high.

Fear of Covid-19 is based on its high estimated case fatality rate — 2% to 4% of people with confirmed Covid-19 have died... We believe that estimate is deeply flawed. The true fatality rate is the portion of those infected who die, not the deaths from identified positive cases."

The [rate] is misleading because of selection bias in testing. The degree of bias is uncertain because available data are limited. But it could make the difference between an epidemic that kills 20,000 and one that kills 2 million. If the number of actual infections is much larger than the number of cases—orders of magnitude larger—then the true fatality rate is much lower as well. That’s not only plausible but likely based on what we know so far."

This directly mimics what I had already been saying in various forums. I may not be an epidemiologist, but I’m well versed enough in research methods and statistical analysis to have realized early on exactly what these two Stanford professors are now saying. 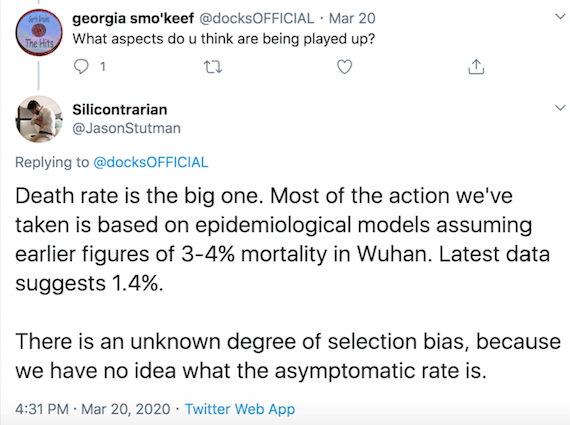 There are a few reasons why this is such a massive error...

First, is the significantly high rate of asymptomatic carriers.

Data from Iceland suggests an asymptomatic rate of 50%–75%, data from the Diamond Princess cruise ship suggests ~50%, and data from South Korea suggests 30%. That’s a lot of people who have COVID-19, but aren’t showing any symptoms, and therefore are not being tested.

Second, is the unknown rate of patients with mild symptoms who do not seek testing. If you come down with a low fever, you are not necessarily going to rush out to the doctor or hospital and get tested for COVID-19. Considering that a staggering 80% of individuals who show symptoms only show mild symptoms, it’s obvious that there are a lot of people we aren’t counting.

Just to do some rough math on this, let’s consider the following, using the upper bound of asymptomatic patients (75%). If only 25% of patients are symptomatic, and only 20% of them show symptoms that warrant a doctor’s visit, this means that we may only be counting as little as 5% of the total number infected.

Now, on the surface, this all might sound scary because it means way more people are infected than is being reported as confirmed. But it also means that the virus is significantly less deadly than the headlines and hysteria would have us believe.

To be completely clear, this does not mean that COVID-19 is not a serious health threat. It absolutely is, and you should still take the same kinds of precautions you would take to avoid getting sick by other means...

However, the virus may in fact be closer to the flu in terms of mortality rate after all, possibly even magnitudes lower. At the very least, the virus looks to be drastically less dangerous than we originally thought.

Of course, a huge amount of damage has already been done to the economy, and we are by no means out of the woods — even if the most optimistic of these assumptions are true.

That said, there is a light at the end of the tunnel here and good reason to quell the panic. As I said last week, stocks would rebound the moment the conversation shifted to restarting the economy, and that’s exactly what happened.

As for what comes next, I’m not expecting a full on reversal back to a bull market (we’ll have to weather some pretty dire economic figures in the coming weeks and months), but I do expect sentiment to continue shifting away from mass quarantine and containment. It simply isn't sustainable.

If you want my opinion on the steps we should be taking, it would be this:

Governments around the world would be extremely wise to follow this general guideline or otherwise continue to face dire economic consequences and considerable health consequences.

This probably won’t happen, but there's always room for hope.