There is a growing division among investors over the fate of Iraq’s currency, the dinar. While some expect the IQD’s redenomination to lift the dinar’s value dramatically higher, others say it will have no effect on the money’s value at all.

Iraqi politicians are equally at odds with one another, with some strongly for and others strongly against the plan. But isn’t redenomination supposed to be good for the nation’s currency? Why are they stalling? 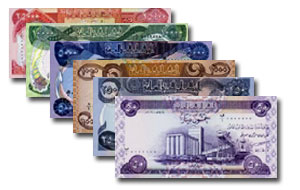 The plan to redenominate the dinar by dropping 3 zeros off its notes has been anticipated since the Iraqi government first announced it back in 2010. The reason for the redenomination is to make transactions and accounting easier for the government, banks, and the general populace. As Shayya, an MP for the State of Law Coalition, explained to the Middle Eastern newspaper Al-Monitor:

“The Iraqi currency is weak, and the money supply has amounted to multi-trillions because of the existence of these useless zeros. The country will witness a significant increase in oil revenues, financial earnings and high budgets. Thus, we need to print new banknotes, as estimated by the Central Bank.”

Indeed, now that the UN has removed Chapter 7 restrictions from the nation, Iraq is fully open for business again and will see ever increasing trade over the coming years. A new currency with fewer zeros will make things so much easier.

Yet some in the Iraqi government are reluctant to move ahead with the change, upsetting a number of redenomination advocates, including MP Nahida Daini, who lamented, “The Council of Ministers asked to delay the process for fear of money laundering operations.” Daini believes such fears are baseless, reassuring that “there are regulators in Iraq who can follow up and ensure the integrity of the project.”

Those opposed to redenomination, though, are adamant that the Iraqi government is simply not yet ready for such a monumental task. Mudher Mohammad Saleh, former deputy governor of the Central Bank of Iraq, stessed to Al-Monitor that the deletion of zeros “does not only involve changing the design of the currency; it implies changing the economic system in the country in general.” He warned that “the decision to implement the deletion of zeros next year is very dangerous and risky” and “must be done at the appropriate time.”

In the meantime, ruling officials would rather see the Iraqi government focus on other ways of stabilizing its currency and economy. As Magda al-Tamimi, member of the parliamentary Finance Committee, described it, “Iraq is not ready to control the possible currency fraud that may result from the deletion of zeros. The Finance Committee is now working toward controlling the Iraqi currency auction, which is witnessing a significant fluctuation in the exchange rate of the Iraqi dinar against the dollar.”

Through these daily currency auctions, the Central Bank of Iraq issues U.S. dollars only to registered banks, importers, and other firms who need USD for conducting international transactions. By thus restricting the amount of USD circulating in Iraq, the CBI manages to control the value of the IQD, holding it at a steady rate. 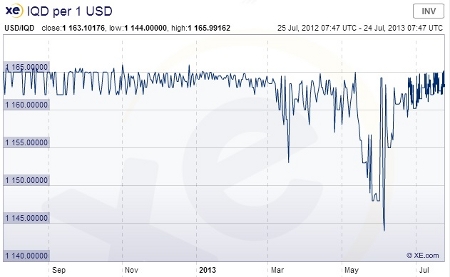 By deliberately controlling the IQD:USD exchange rate, the Iraqi central bank ensures the IQD remains weak, as can be evidenced on the chart above. Every time the dinar starts to strengthen (shown by descending plotlines), the CBI manages to bring it right back to its desired exchange rate.

Why? Because maintaining a cheap IQD means that every U.S. dollar of oil revenue the country brings in would be worth more dinars, allowing the country to print more of its own money, which would then allow it to pay for more reconstruction, hire more unemployed, and stimulate its economy. Almost every other nation in the world is trying to keep its currency weak for the same reasons.

Even as Tamimi confirms, “Development is the gateway to strengthening the currency. Thus, raising the value of the dinar is more important than the deletion of zeros.”

Can Redenomination Include Higher Valuation?

But Tamimi’s comment brings up a very interesting point. While many investors in the Iraqi dinar believe its redenomination (chopping off 3 zeros) will be accompanied by a revaluation (a sudden increase in the value of the new Iraqi money), Tamimi’s statement shows the two events do not happen together. They are two separate concepts that do not coincide.

Yet if the Iraqi government takes the additional step of increasing the value of the new money – let’s say by doubling it – then that same 1.164 of new money would buy 2 U.S. dollars. This would mean that with one stroke of the pen, the nation of Iraq would be worth twice as much in USD as before, overnight.

Other nations would protest. In order for the government to declare its money to be suddenly worth twice as much in USD as before, it would have to provide assets to account for that extra wealth in USD – not underground reserves, but actual exchangeable assets.

Iraq will some day – and not far into the future either – mount one of the greatest comebacks since Japan and Germany after the second world war. Iraq is destined to become the world’s second largest oil exporter, and it will be rich.

It makes sense, then, to invest in the country early on, while it is still under development. But there are better ways of doing it than buying a fixed IQD that does not trade freely.

Iraq has an active stock market, the Iraqi Stock Exchange (ISX), which currently lists more than 100 companies including industrials, banks, insurers, hotels, and telecoms – all sectors which will undoubtedly flourish as the nation develops.

It may be complicated for a foreigner to invest in the ISX. However, many companies listed in Iraq are listed in other countries as well where it may be easier for you to trade.

The IQD, however, is a different story. The Iraqi government simply cannot afford to let its currency trade freely on an open market at the whim of supply and demand forces. If it were allowed to trade freely, it would probably strengthen to a certain extent, as graphs show. But this would lead to deflation, make money too expensive for businesses to get their hands on, and it would ultimately stop the economy’s gears from turning.

A strong IQD would shut Iraq down like the 2008 credit crisis nearly shut American down. And just as the U.S. central bank has been doing all it can to keep interest rates down and prevent the USD from strengthening too much, so too will the CBI continue to do what it can to keep the IQD down.

Since redenomination is not the same as revaluation, investors would do best to find other ways of benefiting from Iraq’s future rise, since they won’t find it in the dinar – no matter how many or how few zeros it has.

Iraqi Stock Exchange
The Iraqi Stock Exchange replaced the Baghdad Exchange in 2004, and since then it's begun to grow into a substantial exchange...
Iraqi Currency Scam
Despite billions in Iraqi anti-corruption efforts by the U.S., the Central Bank continues to show signs of corruption...
Iraqi Dinar Stabilization
The Iraqi dinar is still valued relatively low against the dollar. And the Central Bank of Iraq is working to keep it there...
Buffett's Envy: 50% Annual Returns, Guaranteed
Warren Buffett once told investors at an annual shareholder meeting, "...it's a huge structural advantage not to have a lot of money. I think I could make you 50% a year on $1 million. No, I know I could. I guarantee that."