Investing on Your Own

Beating the System with Gold

This article is part of a speech Nick delivered as a featured speaker at this year's New Orleans Investment Conference. You can find the speech in its entirety here.

Basically a lost half decade.

Traditional approaches don't work in that kind of environment.

Let me show you an example...

Here's a chart of the Dow and S&P since September 2009, the month I opened up a company-match IRA.

The market is up MORE THAN 40% since then:

But my diversified mutual fund approach has gone up only 4.9%.

It's gone up 4.9% holding a professionally-managed mix of growth and value companies and emerging market plays.

I could've bought a Dow index fund on my own and been up 40%. I only stay in for the company match.

If you tangle with Wall Street like that for all of your financial needs, you'll never get ahead. They gobble up what should be your return in the name of fees and administration costs.

You've got to do it yourself.

All you are to them is a pawn, a fee that funds their salary.

But that's "the new normal," a phrase I'm sure you've heard tossed around...

On one side, corporate profits are at record highs; the Dow is marching headlong to pre-Great Recession levels.

On the other side, eroding middle and lower classes whose costs are rising (health care, education, food) while income remains flat or falls, but on whom America's consumerist economy continues to depend.

Much of this is being facilitated by the Federal Reserve, its chairman Ben Bernanke, and their plan of continued money printing. 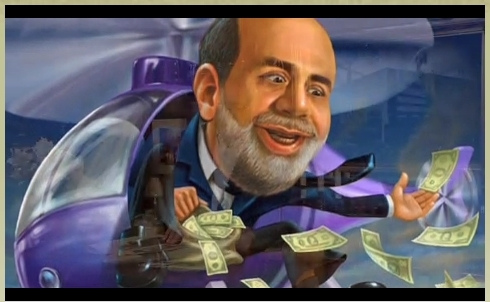 But he's not printing money, per se. He's buying troubled assets from banks that no one else wants to buy — you know, things like mortgage-backed securities. He's doing it, as we learned last month, to the tune of $80 billion per month. And he won't say when he's going to stop.

This is what's keeping the market and banks afloat. In a free market, they would be allowed to fail. But in the new normal, the government will continue to prop them up at your expense.

And the more they do this, the less your dollar is worth.

It's why the first investment I recommend these days are precious metals. I even gave some to my godson for his 13th birthday, along with a letter about perceived value.

You see, every dollar the Fed spends on “quantitative easing” makes the dollars in your pocket worth less... but it drives the price of precious metals higher.

It's the reason gold is outperforming the market twice over, as you see on this chart:

You should be exposed to precious metals one way or another.

You can own gold or silver bullion, a fund that tracks their price like the SPDR Gold Shares (NYSE: GLD) or iShares Silver Trust (NYSE: SLV), or a fund that is backed by the metals themselves, like the Sprott Physical Gold (NYSE: PHYS) and Silver Trusts (NYSE: PSLV).

You can even own a fund comprised of various gold miners, like Market Vectors Gold Miners ETF (NYSE: GDX).

This is what insiders are doing with their money...

George Soros said in 2010 that gold was “the ultimate asset bubble” and that it was “certainly not safe.” Yet this year he DOUBLED his gold holdings. He now owns $134.4 million worth of the SPDR Gold Shares Fund.

Hedge fund manager John Paulson, who made billions betting against subprime mortgages during the crash, is also increasing his stake in gold. His Paulson & Co. fund owns 21.8 million shares of the same GLD fund. He now owns $3.53 billion worth of gold, or about 44% of the company's assets.

I doubt you'll find any financial advisor or member of the insiders' club telling you to put 44% of your assets in gold.

In fact, Homeland Security reports have suggested those who own gold or who are suspicious of centralized federal authority should be labeled as terrorists. They want to keep you buying their pre-programmed plan that earns you a lousy 4.9% while the market goes up 40%.

But here we clearly see that's what some of the world's richest men and smartest investors are doing...

Play their game — not the game they want you to play.