Looking for Gold? The West Is the Best

The world's most precious metal is probably right in your own backyard.

Data from the U.S. Geological Survey shows remaining natural resources of over 1 billion ounces of gold here in the United States.

In fact, the USGS believes $700 billion worth of U.S. gold is still completely undiscovered. And that's exactly why billions are spent every year...

In the mid-1980s, U.S. gold production levels spiked as a result of two major factors: 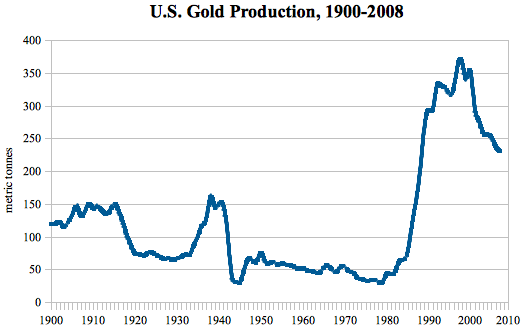 The United States remains one of the world's most important gold producers. In 2008, the country produced approximately 230 tonnes of gold, making it the third-largest gold-producing nation behind only China and South Africa.

America is actually a net exporter of gold. In 2008, the U.S. exported nearly 21 million ounces of gold. Approximately two-thirds of this gold was exported to the United Kingdom, Australia, and Switzerland.

Over 70% of the gold produced in the United States today comes from large, open-pit heap leach mines in Nevada. Nevada's gold mines have produced nearly 3% of all the above ground gold in existence. And it's exactly where you'll find what I reckon as the...

Barrick Gold is the largest gold company in the world. And nearly a third of the company's total gold production comes from Nevada.

Newmont Mining has been pouring gold in Nevada for nearly 50 years. The company's operations include 14 open-pit and four underground mines and 14 processing facilities.

In 2008, Newmont's gold operations in Nevada produced 2.2 million ounces — 43% of the company's total production for the year.

The West Is the Best

Nevada has the highest concentration of gold mining claims of any state in the U.S. But there are more lucrative investment opportunities in some of the surrounding states...

About 60% of all the gold mining claims in the U.S. are located in the states that encircle Nevada.

The map below — rarely seen by anyone outside of the gold mining industry — shows the hundreds of thousands of gold mining claims that dot the Western United States: 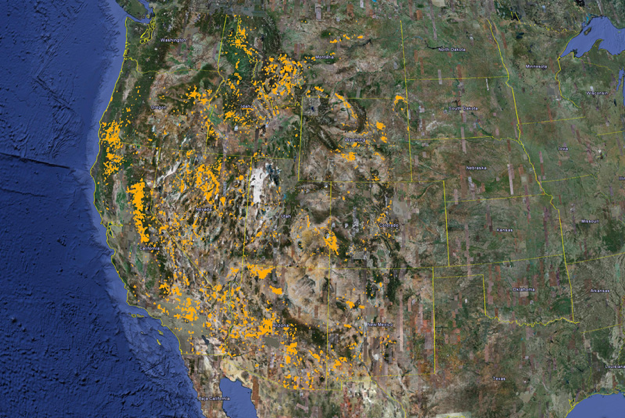 There are over 200,000 gold mining claims located in eleven Western states that surround Nevada.

Geologists are specifically staking gold targets in Wyoming, Arizona, and Idaho, where some of today's most prospective gold investments are currently being made in the Boise Basin.

Mining professionals know that this region is one of the best places in the world to discover and mine for gold.

The Western United States is home to some of the richest gold deposits on earth. And the country as a whole is extremely mining friendly boasting:

Based on these important factors, investors are encouraged to invest with confidence in gold stocks with quality projects in the Western United States.

I will be sending you an article this weekend which features yet another gold investment idea. This tiny $0.34 stock has a gold resource just north of Nevada that's worth over 60 times the company's market value.

The company is preparing to start production of this sizable resource. And as a result, I think shares could make their first move to $2.50 in short order.

Be on the lookout for my next piece, as I continue to bring you profit opportunity with gold and other precious metals...