Investing in Technologies on the Cusp

This is just a partial list of some very intriguing technologies currently being developed and marketed by companies whose names — sadly — you've probably never heard.

These aren't concepts, computer-generated simulations, or even prototypes; these are existing, working, marketed products that either are within your reach right now through online vendors or will be at some point in the near future.

But their manufacturers — the people and companies holding the patents — are not names you know... not unless you're close to the industry...

Or unless you happened to attend a quiet little meeting held last week on the outskirts of Los Angeles's super-exclusive suburb of Bel Air.

Unfortunately, this meeting wasn't for everyone. It was private and held at a fully booked, secluded hotel far away from the prying eyes of journalists, tourists, and gawkers.

In attendance... well, the names will mean little to anybody outside of high finance, but in terms of personal net worth and money under management, the fund managers, brokers, and wealthy private investors there would have easily been in the double-digit billion-dollar range.

So yeah, a bunch of boring older dudes, some younger guys trying to be as un-boring as possible, and a handful of white-haired men in linen shirts who had lived to the point in their lives where Bloody Marys weren't so much a drink as a transitional state between sleep and martinis.

But the most impressive part of it all, and definitely the most interesting, wasn't the people with the money... It was the people looking for it.

Presenting their products, services, technologies, and processes were dozens of companies.

They ranged widely in industries, with everything from oil exploration and mining to next-generation medical imaging.

Every company that presented was compelling — even firms with relatively inane products like impact-resistant work gloves or fire-suppressing building materials.

They all had good market positioning and potential, and most of them had products in warehouses that had everything necessary to disrupt the current status quo of their respective niches.

What they needed more of was funding... which is why the CEOs and Presidents of these companies were standing in small conference rooms packed with enough net worth to buy a small country.

I was one of the few on the guest list of this meeting. And after three days, I flew back to Baltimore with a whirlwind of thoughts spiraling in my head. Too many great ideas out there... too little financing to make them all work.

The most prospective ones — from the standpoint of private and institutional investors — were profitable.

But some of the best ones were right there on the cusp, commanding patents that would make companies like Apple and Google blush.

A $38 tablet capable of delivering full-speed video at a cost of $0.50 per month represents just one of these... Can you imagine the new markets that level of price decrease would open?

Or how about a company called MicroVision, Inc. (NASDAQ: MVIS), a Nasdaq-listed tech microcap based out of Redmond, Washington — just down the street from Microsoft's corporate headquarters?

It has reinvented the high-definition projector using lasers in place of LEDs to produce a bright, colorful, room-sized picture from a projector small enough to be fitted into future smartphone models.

The company has 66 employees, is valued at more than $150 million as of today's share price, holds more relevant patents in augmented reality, miniaturization, and head-mounted displays than any other company in the U.S. — and it still thinks of itself as a start-up. 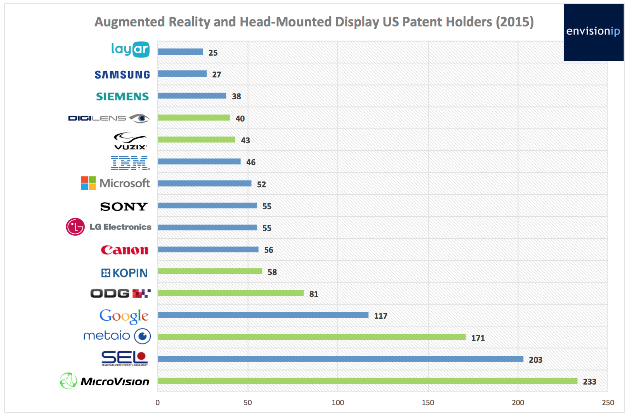 Check it out yourself and see what I mean. You'll be amazed that companies with this much upside can go all but unnoticed by the global consumer market... and reminded that even the biggest success stories have to start somewhere.