How to LEGALLY Make $1.25 Million from Pot Brownies

It was around 4:00 in the afternoon when my Uber driver dropped me off at a small dispensary just a few blocks from the Queen Anne B&B — my favorite place to stay whenever I find myself in Denver.

It was my last day in Denver, and I wanted to partake in some of the city's cannabis offerings, which are now completely legal.

Although I don't typically consume marijuana, I figured, when in Rome...

The inside of the dispensary looked a bit like a trendy bakery, only the jars that would typically hold biscotti and coffee beans were filled generously with marijuana.

There were also display cases where there actually were baked goods: mostly cookies.

Since I'm not a fan of pulling any kind of smoke into my lungs, I opted for a bag of chocolate chip cookies.

I won't lie; as a bit of a food snob, I thought the cookies were no better than what you might find at the grocery store. But I wasn't looking for a mind-blowing gustatory experience.

When I returned to my room, I ate one cookie and washed it down with a few sips of cold coffee I had left on my nightstand earlier that morning. I knew it would take at least 90 minutes to start kicking in, so I decided to do a little work to pass the time.

After scarfing down a delicious meal at Watercourse, one of my favorite Denver restaurants, I went back to my room and spent the next few hours trying to figure out how I could capitalize on what I believe could be one of the biggest opportunities in the legal marijuana space: edibles.

According to the Colorado Department of Revenue, consumers bought 5.8 million cannabis-infused edibles and concentrate products in 2014.

Rest assured, dear reader — that number is only going to grow. And some big money is looking to facilitate this growth.

Auntie Dolores is a specialty edibles company that just closed a $1.25 million round of financing to help it expand into new territories. $1.25 million is also what the company expects to generate in revenues this year.

Think about that for a moment...

$1.25 million in revenues from pot cookies, brownies, and pretzels. 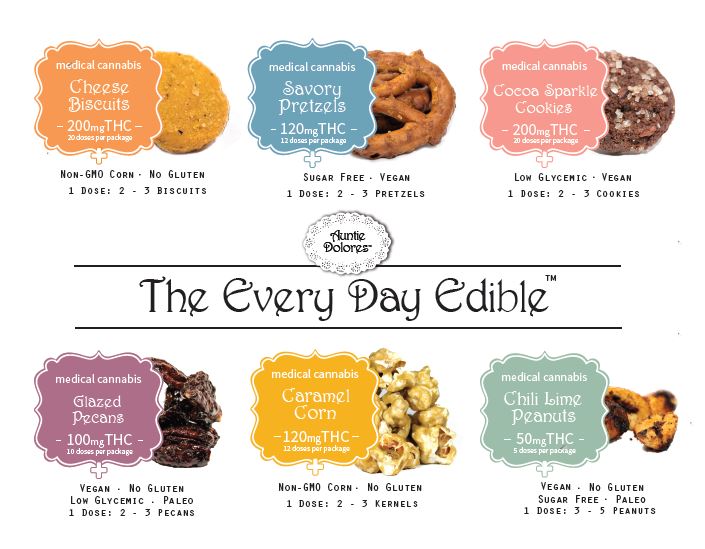 Auntie Dolores is one of the biggest players in the edibles space, and the company's game plan looks solid — particularly on the licensing side.

Of course, Auntie Dolores isn't publicly traded. But that doesn't mean there aren't other options.

I've been singing the praises of the legal marijuana space for a few years now. Bottom line: I haven't seen this kind of growth opportunity since I first started covering the renewable energy space back in 2005.

Just imagine what that's going to look like as more and more states sign on to legalize.

According to investment firm ArcView — which helped Auntie Dolores with its $1.25 million raise — by 2019, all of the state-legal marijuana markets combined will result in a market value of about $11 billion a year.

And if, at some point, all states choose to legalize, the market would be valued in excess of $36.8 billion a year.

If you're looking for a growth story, you won't find one better than this.

And in the coming weeks, I'm going to tell you more about how you can get a piece of the action, too.