Invest Like a Founder: How to Buy the Hottest Stocks Before They IPO

Take a look at the stocks in the graph below for a moment and see if you notice anything in common.

You may realize that all four of the securities listed are technology stocks, and you’d certainly be right in that assessment.

You may also notice that they’ve all produced significant returns for investors this year, and you’d be right about that too…

But there’s something a little more specific happening with all four of the stocks in this chart that’s really quite interesting. Can you see it? 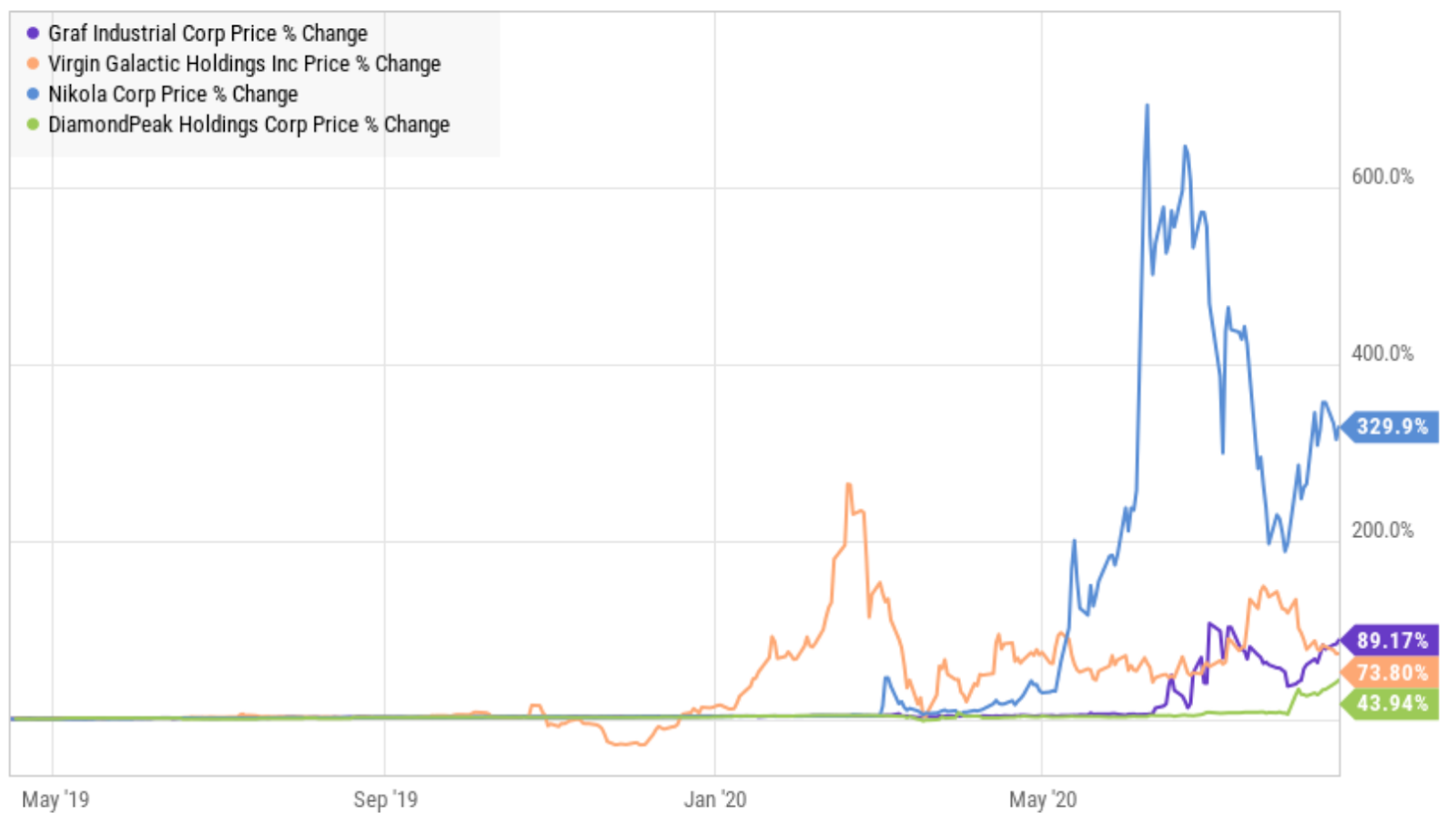 It may be difficult to notice with the overlapping plot lines, but all four of the above stocks were trading almost completely flat until one day, seemingly out of nowhere, their share prices began to explode.

In short, you could have bought any of these four stocks in late 2019 with virtually zero volatility and then waited patiently for your investment to produce returns as high as 600% in a matter of weeks. I don’t know about you, but I find that incredibly compelling.

Of course, the opportunity for the sudden run-up on these four stocks has come and gone, but the good news for investors is that behind the scenes of these charts is a unique investment vehicle that’s been growing in popularity over the past several months. In fact, experts in the field believe these examples are just the tip of the iceberg.

How Founders Get Instantly Rich: They Go Public

We’re going to digress here for just a moment but the conversation will circle back around...

If you work your way down the list of the world’s richest people, you’ll notice one thing most of them have in common: They once owned private equity in a now-blockbuster company before it went public.

Think Jeff Bezos and his 11.2% stake in Amazon, Elon Musk and his 20% stake in Tesla, or Mark Zuckerberg and his 29% stake in Facebook. Compared with valuations today, their private shares were once trading for pennies on the dollar. When those shares became available to public investors, though, these men became enormously wealthy at the flip of a switch.

Now, you might think it unfair that these individuals can build up private ownership of a company before it goes public, hoarding the lion’s share of early returns for themselves, and it would be difficult to disagree. Financial regulation laws, purportedly designed to protect Main Street investors from being fleeced, prevent the vast majority of people from participating in private equity.

This kind of trading (pre-IPO) is reserved almost entirely for the rich and the well-connected. You either work at the company, have a relative who works there, or you’re consistently bringing in over $200,000 in income every year (aka being rich). If not, well, you just can’t handle this kind of investing, you meager little plebeian — private equity is simply too sophisticated for you!

No doubt it’s a condescending way to regulate, but that’s just the way it is. As a retail investor, your options have been historically limited, putting you at a clear disadvantage. It seems pretty unfair, but at least we’re moving in a better direction thanks to a couple new investment trends.

The first trend relates directly to the four stocks above: Virgin Galactic, Nikola Corp., Graf Industrial Corp. (Velodyne Lidar), and DiamondPeak Holdings Corp. (Lordstown Motors). All you needed to build a position in these companies before their entry into the public market was a standard brokerage account because they went public through a unique route known as a special-purpose acquisition company, or SPAC.

An SPAC is pretty much what it sounds like: a company designed with the sole purpose of acquiring another. These companies have no operations and no revenue in their early stages; they are simply vehicles to merge with a private company.

If you’re wondering what the catch is, it’s uncertainty. Investors don’t know which private company is going to be acquired, which is why you will see shares trading flat for months and then a spike at the time the merger is announced.

That said, if you’re investing in SPACs, you aren’t doing so completely blind. Perhaps the most telling signal of whether or not an SPAC is worth speculating on is who’s running it.

Take the acquisition of Richard Branson’s spaceflight company Virgin Galactic in 2019 for example. The company was acquired by the SPAC Social Capital Hedosophia. You’ve probably never heard of it, but it was founded by billionaire Chamath Palihapitiya. Palihapitiya was an early senior executive at Facebook and is also a minority stakeholder of the Golden State Warriors

Following folks like Palihapitiya is probably a smart move if you’re going to speculate on an SPAC because the impending acquisition really comes down to whoever is doing the shopping. Palihapitiya, by the way, has two more SPACs that could take off any moment now: Social Capital Hedosophia Holdings Corp. II (NYSE: IPOB) and Social Capital Hedosophia Holdings Corp. III (NYSE: IPOC).

Other notable tech moguls are moving in on the SPAC trend too. This week, Kevin Hartz, the co-founder of Eventbrite and early backer of Airbnb and Uber, led a $200 million round for an SPAC that will soon trade on the New York Stock Exchange under the ticker AONE. This will definitely be an interesting SPAC to follow.

With these big names coming on board, many investors now believe that SPACs are going to continue increasing in popularity as they offer an alternative and often expedited route to going public. Personally, I wouldn’t be surprised to see some mainstream headlines in the future dubbing 2021 the year of the SPAC.

SPACs, however, are not the only way that Main Street investors can get in on massive pre-IPO bumps typically enjoyed only by venture capitalists and founders. Recent securities regulations have opened the door to a new method of pre-IPO investing that very few people are yet aware of.

More specifically, a recent act of Congress called HR 3606 now allows investors to claim shares in small emerging companies with the potential for explosive growth before they IPO.

If you’re interested in learning how this all works and having pre-IPO deals sent to your inbox, I definitely would urge you to check out this free presentation from ex-Morgan Stanley banker Jason Williams.

In it, he’ll explain exactly how you can get started as a pre-IPO investor today, getting in early on companies that could be the next Amazon, Google, or Tesla. Trust me when I say this isn’t an opportunity you want to miss.