It's the biggest underwater tunnel project in history, and it could mark a turning point in the dynamics of commodities and resource markets from Western Europe to the United States.

You're probably old enough to remember the fireworks and hoopla associated with the opening of the Chunnel, the massive Franco-British civil engineering project that first linked Dover and Calais via a 31.4-mile-long auto and railway tunnel through the English Channel back in 1994...

Now plans are under way to beat the Chunnel's record by more than a factor of two — in a place far colder and less forgiving than the Channel — with the goal of ultimately connecting two nations that, at one point in the not-so-distant past, were gearing up to wipe each other off the face of the planet.

The Bering Strait tunnel, approved by Russian authorities almost exactly one year ago, will be 65 miles long.

It will allow humans the ability to travel from Western Europe all the way to the Atlantic Coast by land for the first time in history... 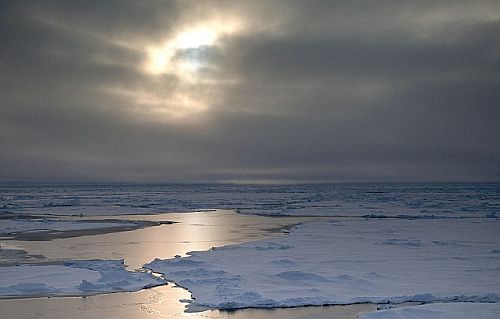 “The project is already under way,” stated Viktor Razbegin of the Russian Ministry of Economic Development.

“The rail track to Yakutsk that we have been building for the past 15 years has always been seen as the first part of the road. It will be finished in just about a year. However, the most important is the political decision which hasn’t been taken yet. There are multiple countries involved, and it will be hard.”

With an estimated cost of $99 billion, this project will require the participation of Russia, the United States, Japan, and China, and could take an additional 10 to 15 years before it's completed.

Once done, however, a person departing New York could potentially awaken to the sounds of Big Ben's tolling bells three weeks later.

Not exactly a time-efficient alternative to flying the route (a trip I've taken, which today can be done in less than 24 hours of transit), but this plan opens up a whole new set of opportunities beyond civilian travel... 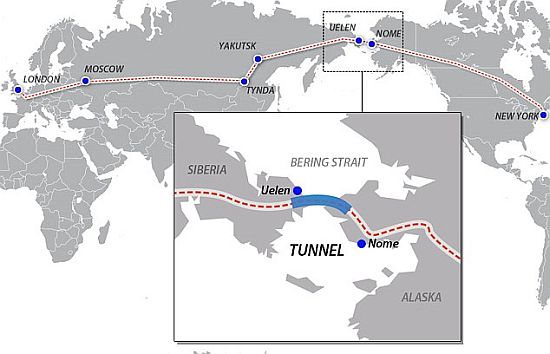 Collectively, the U.S., Canada, and Russia represent the world's first, second, and third largest natural gas producers... the world's first, third, and sixth biggest oil producers, a triumvirate which will only tighten in the coming years as the withering Middle Eastern oil empires start to pump their wells dry... and, of course, the world's biggest oil consumer (the United States).

This tunnel plan, among other things, will allow for the creation of a virtual railway pipeline — both for oil and gas — between the two continents.

Not a small deal considering China, whose own massive fossil-fuel consumption needs are growing faster than that of any other nation, will also be closely linked to this project via railway.

Of course, such an event signals a turning point in Russian/American politics that bodes well for us all.

Once completed, these once-bitter rivals will become not just physically, but economically linked in a way that has never before been thinkable.

And the implications for investors are equally significant...

For anybody involved in trading these resources — or even curious about investment in the precious/industrial metals and energy markets — this project could represent the single biggest event since the North American oil boom of the early 20th century.

In uncertain times like these, I know it's sometimes hard to pick out good news amidst all the doom and gloom you see and hear every day...

But let me assure you, it's there.

Keep a close eye on this story as plans are finalized and financing is secured...

Because once this project begins, speculation alone will start to take effect on a slew of North American oil and gas producers.

In the next several days, Jeff Siegel will be releasing a detailed report on another infrastructure-related topic that will be of even more immediate importance to your portfolio.

Do not miss it.