How to Turn a Paper Clip Into a Farmhouse

I had a little time on my hands last week. I was traveling to see a new company I’m researching and had a few layovers and plenty of hours in the air.

So, after getting caught up on everything work-related that needed catching up, I decided it was time for something a little mindless to relax my brain.

And I stumbled onto a TED Talk. I know what you’re thinking...

I get it. That’s probably not what a lot of people would choose for “mindless entertainment,” but I guess I’m not most people.

And this one just looked too interesting to pass up… 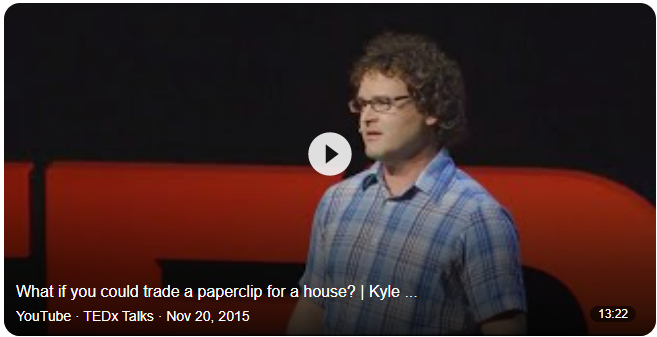 The title just caught my attention: “What if you could trade a paper clip for a house?”

And it was only 13 minutes long. Perfect.

But what started as a way to just pass a little time and let my brain relax turned into a pretty fascinating story I wanted to share with you.

That’s the title of the post that started the whole thing: “one red paperclip.”

And here’s the rest of the post in its entirety:

This might not surprise you, but below is a picture of a paperclip. It is red. 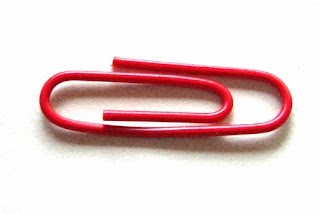 This red paperclip is currently sitting on my desk next to my computer. I want to trade this paperclip with you for something bigger or better, maybe a pen, a spoon, or perhaps a boot.

If you promise to make the trade I will come and visit you, wherever you are, to trade.

Hope to trade with you soon!

P.S. I'm going to make a continuous chain of "up trades" until I get a house. Or an island. Or a house on an island. You get the idea.

So Kyle was sitting at work one day and he got to wondering: “I wonder if I can trade this red paper clip on my desk for something better.”

In most cases, that’s where the story would end. But Kyle decided to actually see if he could. And see just how far he could take his trades.

Could he turn this paper clip into something of real value like a house or some real estate?

So he set up a post offering his paper clip for trade. He gave a couple of suggestions of what he might accept. And he was completely honest about his end goal.

And he started a two-year journey where he’d trade the paper clip for a pen, and that pen for a doorknob, and that doorknob for a camp stove…

He’d trade the camp stove for a Honda generator; the generator for an empty beer keg, an IOU to fill it, and a neon sign; that “instant party” for a used snowmobile; and the snowmobile for a two-person trip to Yahk, British Columbia.

Then he traded one of the spots on that trip for a box truck, which he then traded for a recording contract.

He traded the contract for a year’s rent on a house in Phoenix. And someone offered him an afternoon with Alice Cooper in exchange for the free rent.

Much to Cooper’s chagrin, Kyle traded the afternoon with him for a snow globe featuring KISS, which was then traded for a paid speaking role in a future film.

And finally, after 14 trades over two years, Kyle achieved his goal by trading that film role for a two-story farmhouse in Saskatchewan.

It’s Not Really That Impressive

And at first, I was pretty impressed with Kyle. I mean, he’d taken something of little value and turned it into something of great value.

He literally turned a paper clip into a house. But the thing is... it’s not really that impressive when you really think about it.

And second, Kyle wasn’t just trading things for things. He was also traveling all over the continent to make those trades.

So while he might have traded a paper clip up for a house, he spent a lot of money trying to execute those trades.

And then I really got to thinking. Kyle’s profit was pretty asymmetric. He wasn’t risking really anything making that first post.

And he wasn’t risking too much making the first trade. Yet he ended up with a house in the end.

That’s a small initial outlay for a pretty massive reward in the end.

This Is That Impressive!

You see, Sean’s got a strategy that’s similar to the one Kyle used. Sean sets up trades online. And he only makes a small initial outlay (to minimize his risk). And Sean’s able to “trade up” just like Kyle did.

But Sean’s individual trades generate much bigger returns than Kyle’s did. So instead of trading a paper clip for a pen, Sean’s skipping a few steps and trading the paper clip for the snowmobile.

So that means Sean could trade a paper clip for a house in about half the time it took Kyle. And without having to leave the comfort of his home once…

In fact, over the past one year, Sean’s been able to set up nearly twice as many trades as Kyle did in two years.

And they’re far more successful from a profitability standpoint.

I don’t know about you, but I’ll take the bigger return (and that CASH) any day of the week.

Especially since I don’t have to travel all over hell and creation to get it (like Kyle did).

Make Your Own Asymmetric Profits

So that’s why I wanted to tell you the story about Kyle.

And in the spirit of our mission to help you become a better investor, I want to introduce both Sean and his strategies to you today.

It’ll have to be a select group of you, though… because Sean’s strategies are pretty powerful, and too many people using them could end up cutting the overall potential profits.

But if any of you miss your shot to check out his full seminar, you can also catch him on YouTube from time to time (but you’ll get a lot more out of the formal presentation).

So while he’ll still let me offer it, I suggest you claim your copy of his latest strategy seminar.

And then he can show you how to turn that paper clip into a house way faster than any TED Talk.