I look forward to Thanksgiving dinner with my in-laws the way I imagine my dog looked forward to that fateful trip to the vet to be fixed.

I  claw at the door, whine, and whimper as we make our way down the drive way.

And it's not the food —  or even the damned kids, treating me like a human trampoline after I've put away turkey, green beans, potatoes, corn, pies, and half a case of beer...

It's the investing questions I get once people find out what I do for a living. (And no, feigning a tryptophan coma doesn't help.)

This year was no different. We gathered around the table for dinner, and as soon as the bird had been carved, the offering of opinions and market commentary came at me before I could even ask my wife to pass the gravy.

At this year's event, everyone was an expert on all things gold.

My Uncle Mike was an economic pundit all of a sudden, explaining why gold would run to $2,600 after Europe's problems die down.

I was stuffed and not completely awake yet from my nap. The last thing I wanted to talk about was investing.

“Is that so?” I asked, eyelids heavy, contemplating loosening a notch on my belt.

How could I tell my 65-year-old uncle he'd made a horrible move far too early?

The herd is far too bullish. Gold margins could get hiked again. It's technically overdue for a significant pullback on overextended conditions.

I also knew that gold would bounce once it pulled back, like it has so many times before running to new highs.

You can plainly see it on a multi-year chart: 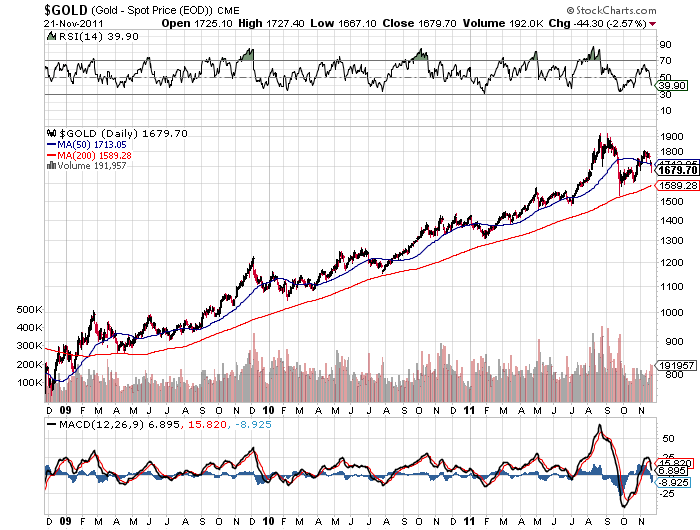 Increased global risk, U.S. dollar weakness, growing inflationary fears, the U.S. debt downgrade and continuing sovereign debt risks in Europe have increased investor appetite for gold. This has been supported by central banks reversing activities from being sellers for most of the past 15 years to net buyers more recently and is supported by the Fed's stated desire to keep interest rates at super- low levels in the medium term.

Let's be honest here; the only benefactor of the European debt situation is gold.

The European Central Bank (ECB) could print an insane amount of euros, or we could see a dismantling of the currency...

Both would lead to higher gold.

If the ECB prints (which it says it won't), it'd need to print more than four trillion euros, considering Italy and France hold more than $3.5 trillion alone.  That kind of cash would create quite a surge in the market, as compared to what the Fed's $1.85 trillion did for the United States.

Just imagine for a moment what four trillion euros would do to gold...

Because of the debt crisis — and the ripple effects on European banks — the European Central Bank (ECB) could easily print billions if not trillions to get out of debt. And that appears to be one of the best options, since the European Financial Stability Facility (EFSF) doesn't seem to have enough money to help.

Of course, this would go against Germany's anti-inflation stance. But Europe really has no choice at this point.

In one fell swoop, the ECB could reduce the value of debt burdens and stimulate economies. Not only would a money-printing move flood global markets with liquidity; it would send world markets to the moon — and the likes of gold to more than $2,000 — in a heartbeat.

This is not a done deal, though. If it were, you'd buy just about everything.

It's far too early to buy large chunks of everything on European QE hopes...

But it's worth paying attention to.

On the other side, should the euro be dismantled, gold would run amok. The very introduction of newer currencies for “euro pull-out” countries would be enough to send gold screaming higher.

I'd buy gold options and even gold stocks on weakness.

Something has to give in Europe. And gold could easily become the historical buying opportunity of a lifetime on these latest dips.

Just as I told you back in October — before the bounce — buy gold on dips. Short it on over-extensions. That's how you trade gold.

You can buy the underlying stock on the SPDR Gold Shares (GLD).

As Andrew Mickey has found, you can also turn a profit from "useless gold mines" that are now hugely profitable on gold's heels. Get all the details in his latest report.

It's going much, much higher... just have patience.

The "Tar Sands" of Precious Metals: Limitless Wealth Covers Canadian Wilderness
Nickel, uranium, lithium, zinc, copper, moly, cobalt — all at the fingertips of a single tiny company that owns six parcels of this metal-rich land. This company has finally perfected the long-awaited technology able to extract $5.3 billion worth of the hottest rare earths and precious metals... and you can still buy its stock on the cheap.

How to Legally Steal a Gold Mine: The Secret Mining Companies Don't Want You to Know
Record highs are reported almost weekly. There's no end in sight. And everyone's diving into the market... While millions are forced to pay retail, here's a little glitch that lets you seize ounces for pennies on the dollar.

Four Ways to Invest in Cyber Security: A Mouse Click to Destruction
Editor Steve Christ takes a look at the growing menace in cyberspace and offers investors four ways to play the trend.

These Oil Stocks are Going Higher: Regardless of What Obama Decides
Even though we're still in the grips of a nasty national recession, with spiking oil prices exacerbating the problem, the government continues to stand in the way of domestic development of energy resources such as oil and natural gas... Luckily for us, we don't have to wait on the government. We can participate in the Bakken boom right now.

Leveraging the Worst Holiday Season in a Decade: Put Down the Gun and Think like a Trader
The numbers all add up to a failed retail holiday season.

The Saudi Oil Confession: The Unconventional Road Ahead
The Saudis are quickly losing control over the world's oil production. A shift to unconventional sources is taking place... and our future oil supply will be coming from a place much closer to home in the years to come.

The Pipeline on Rails: All Aboard the Bakken Express
Energy and Capital's Keith Kohl explains why the latest pipeline delay won't stop the rush of Bakken profits.

OPEC and Obama Team Up to Fight Major Energy Breakthrough: The Real Future of American Energy Revealed
The world's energy elites fight to prevent a new energy revolution... and will still lose.