How to Invest in Nuclear Energy and Uranium

Recently, there have been a lot of headlines about nuclear power, and that's created a lot of interest in investing in nuclear energy and the uranium that powers it.

In fact, it’s been gaining traction as a Google search term all year. But it’s really been heating up lately… 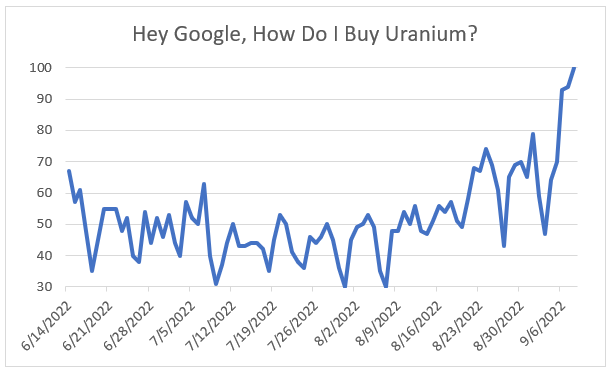 I’d do something more productive and offer you a little advice on how you can invest in nuclear energy and the uranium that powers it.

But first, a little backstory on why nuclear power is popping up so much in the news lately and why it’s likely to continue to do so for a while...

About a month ago, President Biden signed the Inflation Reduction Act into law. And however you feel about it, it’s here and not going away.

And no matter how you feel about funding for alternative energy, that’s in there and isn't going away either.

But the funding isn’t all for solar panels and wind turbines. Nor is it all for electric vehicles.

There’s also billions of dollars set aside for nuclear energy…

There’s $40 BILLION of funding going to the Department of Energy’s (DOE) loan program that’s earmarked especially for nuclear energy and the companies helping generate it.

These are nuclear reactors that run on a special kind of fuel that allows them to be smaller yet generate more power.

They’re also far safer than the large reactors we’re all used to thinking about with the gigantic cooling towers like these at Calvert Cliffs in southern Maryland:

So there’s less need to worry about a Chernobyl- or Fukushima-like disaster.

And since they’re smaller and more efficient, they also create less waste, so there’s less of a problem finding places to store it until its radioactive half-life has passed.

And the American investing press has definitely been making a pretty big deal about that. All of the press, for that matter.

It’s as if they all suddenly realized en masse that nuclear power is a viable alternative to fossil fuels.

Who Makes Those Reactors?

And that’s led to a lot of investor interest, which you can see from the charts of these nuclear-related stocks and funds below: 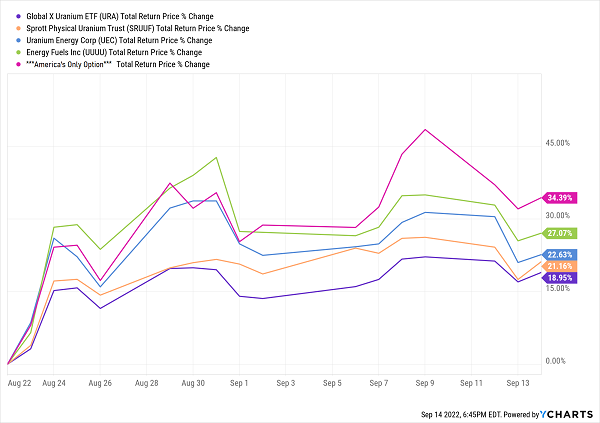 But those are all stocks of companies related to the fuel used to power nuclear reactors: uranium.

The reason for that: There just aren’t many “exciting” nuclear reactor investments.

Those are not just massive companies, but companies with extremely varied business plans (i.e., you’re not just investing in nuclear reactors).

With GE, for example, you also get windmills, aircraft engines, and financial services.

And those are just some of the additional things you get when you invest in a conglomerate like those.

But other than small, private companies, that’s who makes the reactors.

And that’s why investors are betting on uranium instead.

But they’re betting on all the wrong uranium companies…

Remember, the money is for those companies developing newer, safer reactors.

And those newer, safer reactors don’t run on just regular uranium like the old power plants did.

And there’s only one company licensed to make that here in the U.S.

The rest are mainly found in China and Russia.

And you can bet your bottom dollar Joe Biden and his pals in D.C. don't want a penny of those billions going to Putin or his buddy Xi Jinping.

That’s why there’s one company that’s outpaced all the rest in that chart I shared above.

And that’s why it’s America’s only option and should be every investor's biggest bet on nuclear power.

It’s got a legal, government-enforced MONOPOLY on the ONLY power source for these newer, smaller, safer reactors.

And those companies just got TENS of BILLIONS of DOLLARS allotted to them to spend until their hearts are content.

If they want to even be able to test out their new reactors, let alone hook them up to power grids and run them, they’re going to be FORCED to buy fuel from the ONLY company that can make it.

And when the rest of the investing world finds out who’s getting the lion’s share of those renewable energy bucks, the gap between "America’s only option" and the rest of the field is going to get a whole lot wider.

So I want you to get invested today, BEFORE the crowd.

But I’ve already used enough space and taken enough of my editor’s time explaining why you should be investing in nuclear right now.

Fuel up Your Portfolio

So instead of taking up more space and more of her precious time, I’m giving you a link to a special presentation I put together detailing the company and the opportunity it presents.

I’ve also got a report you can read with the same information. Whichever you prefer is fine with me.

Just make sure you check at least one of them out soon. This company’s stock is up nearly 40% since the end of August.

And it’s still moving despite the general market volatility this week. The longer you wait, the higher its share price is going to get…

And the smaller your potential total profits will become.

I don’t want that and I bet you don’t either.

So take some time today, right now, before you start your weekend to learn how you can get invested in the future of American energy TODAY.

I’ll be back next week with more useful insights on how you can prepare for the future even in these uncertain and tumultuous times.