The price of gold is set to absolutely explode, and the best position for investors might simply be physical gold bullion.

There are several reasons for this, but among the most important...

In fact, the premium on spot physical bullion could be DOUBLE gold futures prices.

But first, let me ask you a question: Is there any doubt another major military conflict is unfolding in the Middle East?

It's clear Saudi Arabia breaking ties with Qatar this week was the opening move in the chess game of war. But this could also be the catalyst that drives the entire region into anarchy.

The entire Middle East is extremely fragile right now with everything going on Syria. A military conflict between Saudi Arabia and Qatar is also likely going to include Iran. Now pepper in continuing unrest in other countries like Israel and Afghanistan, and we have a recipe for an all-out Arab World War.

And that's a very scary thought considering the chemical and nuclear capabilities of some nations.

I told subscribers of my Secret Stock Files newsletter this week that I hope I'm wrong about all this. But I won't ignore the writing on the wall...

A major military conflict is unfolding in the entire Middle East. And the price of gold is particularly positioned to skyrocket as a result.

You see, up until recently, there was debate over whether or not a Muslim could, in good faith, own gold bullion as an investment. That debate was cleared up just a few months ago, and the consensus from Islamic religious authorities now allows gold bullion investment.

The ruling opened gold investment up to 1.6 billion Muslims around the world. But to date, there have been no real catalysts to spur Muslims to invest in gold — not even Syria.

However, an all-out war in the region, unfortunate as it may be, would be the mother of all catalysts to drive physical gold prices higher. But note the words "physical gold."

Investment-grade physical gold bullion is rarer than most people think. Most of the world's gold ends up in jewelry. Around 60% of all the gold mined every year goes directly to the jewelry industry. But jewelry is a very poor investment vehicle for gold exposure. Investment-grade gold must have standard weights and purity, and it can come in the form of coins and bars. But here's the issue...

Only about 0.25 oz. of investment-grade gold currently exists per person! That's this much... 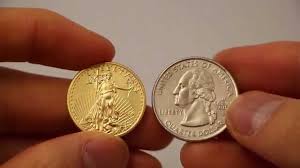 So it won't take a very large percentage of these new buyers to move the price of gold much higher. And as I mentioned, the premium on spot physical bullion could be DOUBLE gold futures prices.

Back in November, the Indian government demonetized over 80% of its national currency. This caused the local price of gold in some areas to soar to over $2,800 an ounce. At the time, it was something like a 125% premium to futures prices. And the whole reason behind the huge premium was lack of supply.

All gold physical bullion already sells for a premium over spot prices: about 3% to 5%. And other precious metal bullion, like platinum and palladium, can retail for 50% over spot prices due to lack of supply. So there is good precedent for higher premiums.

Physical investment-grade gold bullion is in much shorter supply than most consider, and there's a new market of millions of people who have little to no exposure in a region ripe to foster demand.

Gold stocks will also respond to increasing gold prices. But ultimately, a gold stock typically represents a stake in a mining company, not the physical gold it mines.

Of course, I remain bullish on both. But a rapid increase in demand from Middle East Muslims could easily ignite the fuse for gold prices, and premiums, to scream higher.

Buy physical gold bullion before they do.