Why Cannabis Legalization Advocates Should Support a Constitutional Convention

As a libertarian, these words really hit a nerve with me …

We have a once-in-a-lifetime opportunity in New York to peacefully seize control of our government this November 7.

Cannabis legalization advocate Jerome Dewald pulled no punches when describing the opportunity we have before us to end cannabis prohibition in the state of New York.

In a recent piece entitled, “Tyranny in Albany on Independence Day,” Dewald explains how, in just two years, New York voters could end the state’s prohibition on cannabis, and do so on their own terms.

You see, New York state currently allows for the use of medical cannabis, but the program is incredibly restrictive, cumbersome, and inefficient. Only those with very severe and life-threatening conditions can “get permission” from the state to legally purchase and consume cannabis. Many actually believe the program was designed to fail from the beginning, as most politicians outside of the city had no interest in supporting legalization. Meanwhile, more than half of New York’s population favors legalization.

Other states that have legalized adult-use cannabis were up against similar barriers before prohibition was lifted, but those barriers were broken down thanks to the ballot proposal process, which allows voters, not bureaucrats, to decide the fate of a particular issue.

Unfortunately, the New York State Constitution has no such provision. But that could soon change.

On November 7, voters will have an opportunity to approve a state constitutional convention. If voters decide to approve the constitutional convention – which can only be held once every 20 years – they could then have the opportunity to vote on a ballot measure similar to other ballot measures that allowed for adult-use legalization in states where the cannabis industry has since bolstered local economies and created tens of thousands of new jobs.

Here's a rough diagram that details the process ... 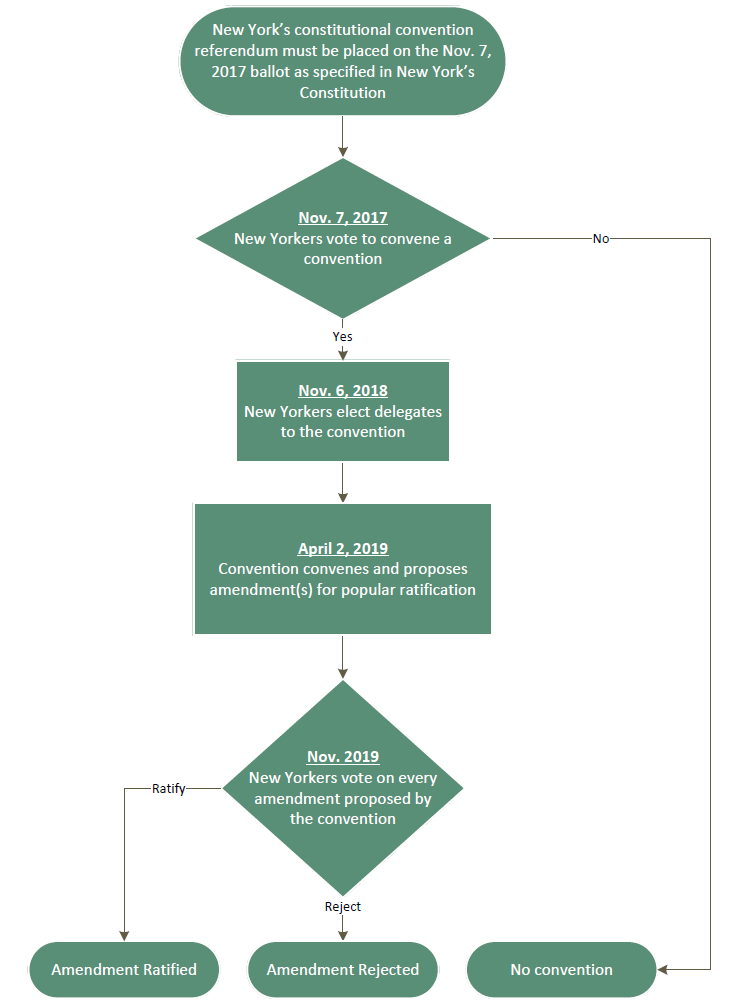 So Jerome Dewald, who is the acting Executive Director of a group called Restrict & Regulate in NY State 2019, is trying to get the word out to New York voters that they do have a voice – if they choose to use it.

As one would expect, a number of legislators don’t want a constitutional convention. Why else would the proposal be on the back of the ballot? And pollsters at Siena College found that 72 percent of voters don’t even know it’s on the ballot. So clearly, Dewald has his work cut out for him.

But here’s the thing …

The truth is, we often hear about how voters do have power. I’ve always been a bit skeptical of that when it comes to national elections, but in terms of local action, I do believe “the people” have a voice. And in this case, “the people” could do a lot more for the state than any single politician.

With the passage of a ballot measure to legalize adult-use cannabis, tens of thousands of new jobs would be created. Changes could be made to the state’s medical cannabis program that would make it easier for sick folks to medicate as they choose, as opposed to medicating as the state chooses, and New York’s struggling farmers would even have an opportunity to grow industrial hemp, which would serve as a very valuable commodity crop.

There really is no rational excuse for maintaining the prohibition of adult-use cannabis in New York, but make no mistake – few politicians have any interest in changing the status quo. That’s why it’s up to the good folks of New York to lead this very honorable revolt against prohibition.

You can read more about New York’s opportunity to legal cannabis here: http://www.cannabis4ny.org/